The corn market will continue to be influenced by an array of factors over the next several months. One of the important price factors in the new year will be the prospective size of the 2013 U.S. crop. Prospective crop size begins with the magnitude of planted acres. Rather than forecast the likely magnitude of those plantings, we pose the question of how many acres are needed?

The answer to the question depends on a number of elements, including:

Assessment of the likely or appropriate magnitude of each of these elements varies widely so that there is no single correct answer to the question of needed acreage. As a result, there are a large number of alternative scenarios that could be considered. Here we consider only one scenario for expected consumption, likely magnitude of stocks at the beginning of the marketing year, and the desired level of stocks at the end of the marketing year. Actual consumption will obviously be influenced by the magnitude of available supplies, the strength of demand, and the price of corn. The desired or “correct” level of ending stocks also implies some judgment about the appropriate level of the average corn price during the marketing year. We also consider only one scenario for the relationship between planted acreage and acreage harvested for grain. Based on this one scenario, we estimate the size of the crop needed in 2013 and then examine the acreage implications of three alternative average yield scenarios. In essence, we assume all of the variables for the corn balance sheet for 2013/14 except planted acreage and then back out the planted acres needed under each of the three yield scenarios.

The basic question posed here is the size of the 2013 U.S. corn crop needed to result in a “reasonable” price of corn? The first issue of course is what constitutes a reasonable price. In general, that is a price that results in positive returns for both producers and users of corn. The most recent year in which those conditions prevailed was 2010-11 when the marketing year average farm price was $5.18 and ending stocks represented 8.6 percent of consumption (Table 1). We consider, then, the crop size needed to result in a marketing year average price near $5.00 and year-ending stocks of 10% of consumption.

The amount of corn consumed next year with an average price of $5.00 depends on the strength of demand. Demand strength, in turn, is determined by a large number of factors that include world and domestic economic conditions, profitability of livestock production domestically and internationally, biofuels policy, and production of competing crops domestically and internationally. We do not attempt to analyze these factors, but draw on recent consumption levels in various categories to forecast 2013-14 marketing year consumption under the assumption of “reasonable” prices. Consumption is forecast in 4 categories: exports, feed and residual, ethanol and by-products, and other domestic processing.

U.S. corn exports have been highly variable in recent years, ranging from a record 2.437 billion bushels in 2007-08 to 1.543 billion last year. Exports have trended lower and will be very small in the current marketing year due to limited domestic supplies and completion from large Brazilian supplies. We do not anticipate a return to extremely large exports in 2013-14, but a recovery to the 1.8 billion bushel level is anticipated under the scenario of larger supplies and lower prices. 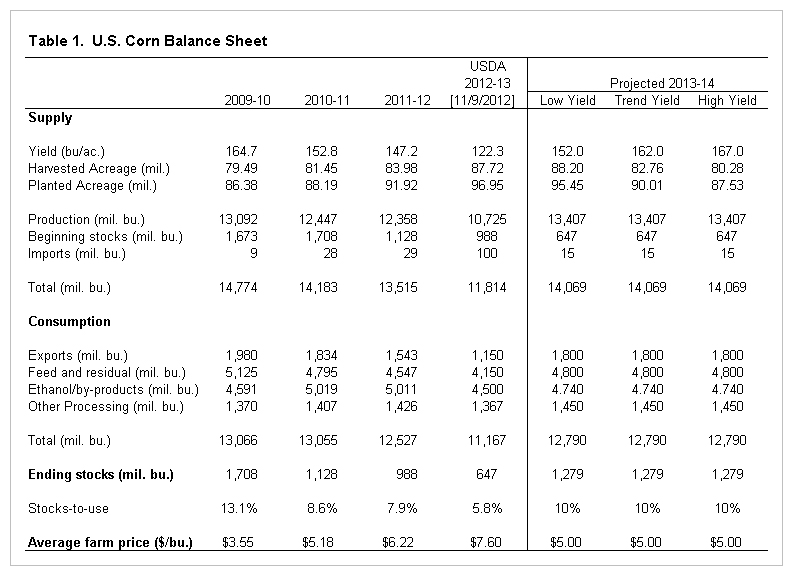 Domestic feed and residual use of corn has also been declining steadily following record consumption near 6.2 billion bushels in 2005-06 and 2006-07. The large increase in feeding of distillers grains has accounted for much of the decline. For the current year, use is expected to be at a 24-year low of 4.15 billion bushels due to limited supplies and record high corn prices. A leveling of distillers’ grain feeding, larger corn supplies, lower corn prices, and improved livestock feeding margins are expected to result in a rebound in feed and residual use next year. Smaller cattle numbers will limit the recovery to some extent, but modest expansion in other livestock sectors is anticipated. Feed and residual use is projected at 4.8 billion bushels.

Ethanol and by-product use of corn will depend on a combination of biofuels policy, transportation fuel consumption, blending economics, ethanol imports, and the pace of implementation of 15% blends (E-15). In an earlier post we made a case for consumption in the 2013 and 2014 calendar years of 4.74 billion bushels of corn for ethanol production and that forecast is used here for the 2013-14 marketing year.

Consumption of corn for other domestic food and industrial products is relatively constant from year to year, ranging from 1.37 billion to 1.426 billion in the three years prior to the current marketing year. A forecast of 1.45 billion is used for 2013-14.

Under the scenario outlined here, consumption of U.S. corn during the 2013-14 marketing year would total 12.79 billion bushels. With beginning stocks of 647 million bushels as currently projected by the USDA, imports of 15 million bushels, and ending stocks of 1.279 billion bushels (10 percent of consumption), the 2013 crop would need to be a record 13.407 billion bushels. How many acres of corn would need to be planted to produce 13.407 billion bushels of corn? Acreage harvested for grain differs from planted acreage by the magnitude of acres harvested for silage and the magnitude of abandoned acres. In the past 10 years, that difference has ranged from 6.662 million acres (2005) to 9.225 million acres in the current drought year. The average difference in the 9 years prior to 2012 was 7.256 million acres. A forecast of 7.25 million is used for 2013.

Needed acreage, then, depends on the expectation of the average corn yield in 2013. We start with an expectation of trend yield. Trend yield can be calculated in a number of ways. We use the period from 1960 through 2012 to calculate trend yield for 2013. However, we use a crop weather model to adjust actual yields during that period for varying weather conditions and calculate a linear trend of those adjusted yields. For 2013, that trend calculation will be near 162 bushels. If the average yield is at that level, 90.01 million acres of corn would need to be planted in 2013. The actual average yield will depend on the nature of the growing season, with poor weather likely to reduce the average below trend by more than good weather would increase the average yield above trend. Here, we consider an average yield 10 bushels below trend and an average yield 5 bushels above trend. Under the low yield scenario, planted acreage would need to total 95.45 million acres and under the high yield scenario acreage would need to total only 87.53 million.

The job of the corn market is to motivate the “correct” magnitude of planted acreage in 2013. To that end, the market will continue to assess demand prospects and prospects for the 2013 growing season. It is problematic, of course, that acreage decisions have to be made before either demand or growing season weather is known. Given the yield shortfalls of 2011 and 2012 and on-going drought conditions in much of the U.S., the market may need to reflect expectations of a below-trend yield in 2013. The current price of December 2013 corn futures, near $6.25 per bushel, is consistent with this scenario. It is important to recognize that even under this scenario planted acreage will not need to exceed that of 2012 unless demand is stronger than currently anticipated or historically large yield concerns persist into the spring.