Drought conditions that impacted corn and soybean production in many areas of the U.S. in 2012 generally began in June. By the end of the growing season, large precipitation deficits developed in some areas. Some of those areas remain very dry, while more normal levels of precipitation have been received in other areas since August. That diverse pattern is illustrated in Table 1, which shows cumulative precipitation deficits for four major corn producing states for the period June through November 2012. Average statewide precipitation for this six-month period in Illinois, Indiana, Iowa, and Nebraska is compared to the average precipitation for the same six-month period since 1895. All four states received less than the average amount of precipitation since June, but the deficits are smaller in Illinois and Indiana, larger in Iowa, and much larger in Nebraska.

The December 11, 2012 U.S. Drought Monitor Map also indicates that extreme to exceptional drought conditions exist in much of the Great Plains. These current drought conditions lead to concerns about moisture deficits continuing into 2013 and the possibility of sub-par corn and soybean yields again next year. While soil moisture deficits going into the 2013 planting and growing season are of concern, it appears that some observers and analysts are forgetting a basic fact about the relationship of crop yields and weather. A large body of research shows that corn and soybean yields are overwhelmingly determined by summer weather conditions, with July weather being the most important. Yes, preseason moisture deficits can impact yield for the upcoming crop but this impact is typically quite small relative to the impact of precipitation and temperature during the reproductive periods for corn and soybeans, a fact that should be all too obvious after the “flash drought” of summer 2012.

In this light, the relevant question is NOT the potential impact of current moisture deficits on yields in 2013, but instead do the deficits signal anything about weather patterns next summer? More specifically, is there any historical relationship between precipitation levels experienced in one year and precipitation levels the following summer? We investigate this issue using historical precipitation data over 1895-2012 for Illinois, Indiana, Iowa and Nebraska. This is the longest available dataset available from the National Weather Service and it should provide the most accurate estimates of the correlations going forward, assuming that climate change has not substantially altered weather patterns. We calculate the following statistical correlations:

Those correlations, where 1 indicates perfect positive correlation in precipitation levels and -1 indicates perfect negative correlation, are presented in Table 2 and illustrated in Figure 1. On average, all correlations are very small, with some modest positive correlation between both summer and total June through November precipitation in one year and summer precipitation the following year in Nebraska. The overall lack of correlation in precipitation from year-to-year is consistent with the long-held view that weather conditions are independent over time, particularly time horizons beyond a few weeks or months. In other words, the predictability of weather year-to-year is no different than the flips of a fair coin. Regardless of what has happened recently the probability that the next weather observation will be above or below average remains 50 percent. 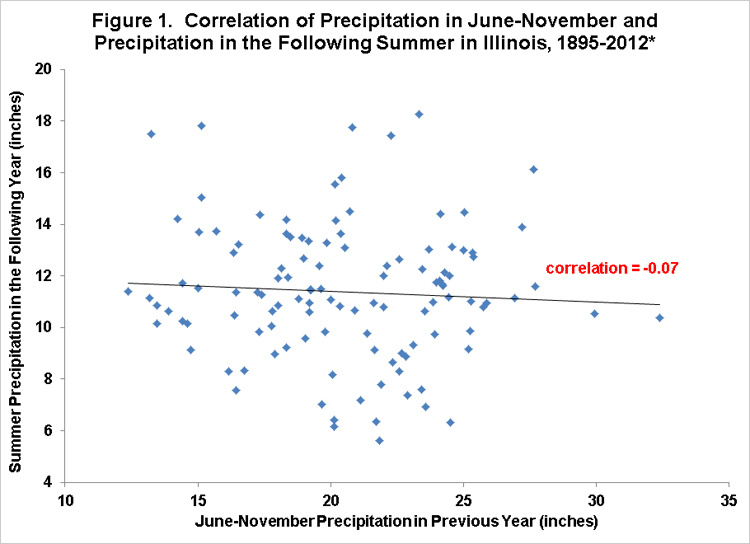 The correlations in Table 2 are computed using the full 1895-2012 sample of data. It is possible for some correlation to be present at the extremes but is masked when looking at all the data. In order to determine whether this is in fact the case, we also examined for each state both July and total summer precipitation in the years that followed the 10 years with the smallest precipitation totals in the June through November period. As shown in Table 3, on average, July precipitation in those 10 years ranged from 82 to 98 percent of normal and averaged 92 percent across the four states. Summer precipitation ranged from 96 to 108 percent of normal and averaged 103 percent. So, there is a small tendency for extremely dry June-November periods to be followed by slightly dry Julys, but the entire following summer period actually tends to be slightly wet.

We also identified the number of years that had more than a one-standard deviation precipitation deficit in either July or the full summer in the year following the 10 driest June through November periods. Those counts are as follows:

Like the previous correlation analysis, this analysis suggests little relationship between precipitation levels in dry years and summer precipitation the following year.

It is important to emphasize that we are not attempting to forecast 2013 summer precipitation levels in corn and soybean producing areas of the U.S. Expectations about weather conditions in the summer of 2013 may be influenced by factors other than recent and current weather. These factors would include, for example, expectations about El Niño/La Niña-Southern Oscillation events and general climate patterns. The point is that making a connection between current moisture deficits and next summer’s weather must be based on these “other” factors. There is simply no general tendency for current conditions to reliably predict what will happen that far into the future.

As a final point, we note that prior to the growing season new crop corn and soybean prices should reflect some risk of sub-par average yields in 2013. That “risk premium”, however, should probably not be much larger than in any other year based solely on current moisture conditions. Current forward prices for the 2013 crops of corn and soybeans are well above the levels that existed before the drought of 2012 and likely reflect substantially more than average yield risk.