Net farm incomes in 2012 on many grain farms will be above expectations, even given relatively low corn and soybean yields caused by the drought. This will occur because of two factors countering yield losses: 1) higher corn and soybean prices and 2) crop insurance payments. Corn and soybean prices increased beginning in the summer and fall of 2012. Cash prices for corn were in the mid-$6.00 range per bushel in the spring, reaching the high-$7.00 per bushel range in the fall. Soybeans were in the $14 range in April and reached the $15 range in the fall of 2012. Price increases partially countered yield declines on farms that did not have a great deal of per-harvest hedging in the spring.

About 60% of corn and soybean acres in Illinois were insured with crop insurance products that cover much of the yield losses. These products, which include Revenue Protection (RP) and the Group Risk Income Plan with the harvest revenue option (GRIP-HR), have guarantees that increase when harvest prices are above the projected prices, the situation that occurred this year for both corn and soybeans. There will be some farms that have low or negative grain farm incomes. Those farms likely did not purchased RP or GRIP-HR at high coverage levels. Moreover those farms that hedged production a great deal of production in the spring could face losses, as they did not partake in the price increases on those bushels that were hedged. A combination of no crop insurance and a large amount of hedging could lead to sizable losses.

Prices on futures contracts in mid-November 2012 suggest harvest time prices for 2013 around $5.50 per bushel for corn and $12.50 for soybeans. These prices – in combination with trend yields, non-land costs that did not increase between 2012 and 2013, and cash rents increasing about $15 per acre – would result in relatively high 2013 grain farm incomes that would exceed average income levels between 2009 through 2012. Overall, projections are for an above average income year in 2013. Of course, 2013 incomes could be much lower. For those farms taking RP and GRIP-HR crop insurance, much of the downside risk will be determined when projected prices are set at the end of February. Projected prices near $6.00 per bushel for corn and $12.50 per bushel for soybeans would result in guarantees at or above 2012 levels, again providing many farms with the opportunities to insure positive incomes by taking high levels of crop insurance. Farms most at risk for low and negative incomes are grain farms that cash rent a large portion of their farmland at high rent levels. These farms cannot assure themselves positive incomes in 2013 even if they take high levels of crop insurance.

The drought resulted in higher corn and soybean prices. These prices delay the return to more normal price levels, likely in the mid-$4.00 range for corn and mid-$12 per bushel range for soybeans. The higher projected prices then result in higher projected 2013 incomes then had the drought not occurred. One unfortunate aspect of this drought increase may be that cash rent levels likely will continue to increase in 2013. These increases likely are larger than would have occurred without the drought. When corn and soybean prices return to more normal levels, the necessary downward adjustments in cash rents may be more painful and protracted than had the drought not occurred, particular for cash rents in the higher range. 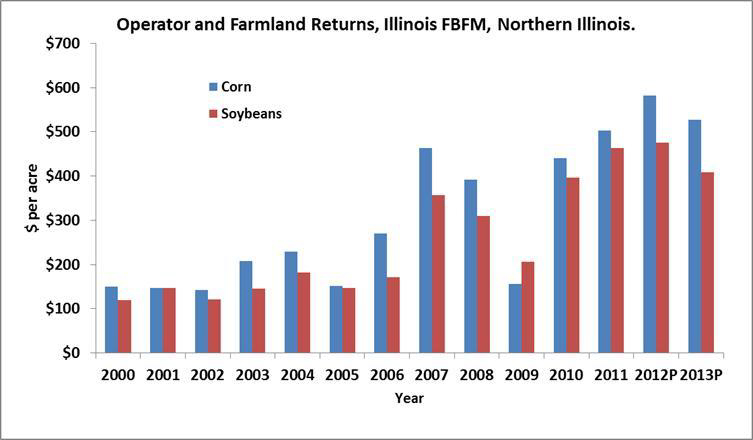 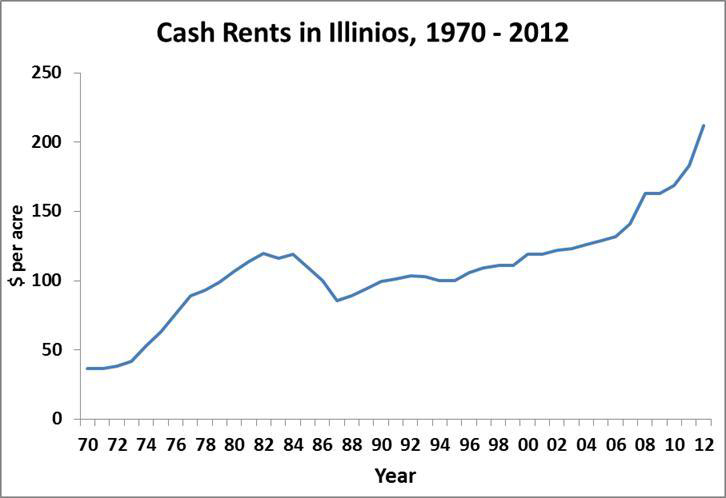