The Risk Management Agency (RMA) “resets” various features of the crop insurance programs annually to reflect the market’s estimate of the value of crops intended for production in the current year. Among the most important factors are (1) projected prices, (2) volatility factors, and (3) harvest prices. Projected prices directly determine the insurable value of production, and thus impact premiums as well. The volatility factor is a measure of the price risk the market associates with potential price changes in the production year, and thus directly impacts the calculated costs of insurance. Finally, the harvest price has the potential to increase the amount of insurance coverage in effect if prices increase between the end of the projected price discovery period and the harvest price determination period. The purpose of this article is to describe the processes used to establish each of these features and to discuss important implications for crop insurance in 2013.

Projected prices serve as the indemnity price/bushel for crops insured under yield, revenue, and certain group products. The idea is to provide a reasonable estimate of the expected crop price at harvest, determined at a time when many production related decisions are being made – in essence a “best guess” of the price per bushel of the crop available to be grown. To establish the projected price for a crop in a given location, rules contained in what is referred to as the Commodity Exchange Price Provision (CEPP) identify a period of time and an associated futures contract as the basis for determining the market’s view of the potential value of the crop.1 For corn over the majority of the cornbelt, the current year December futures settlement prices are averaged across all trade days during February; and for soybeans, the November contract settlement prices are averaged over the month of February to arrive at the projected prices (rounded to nearest cent). Because they are not known with certainty until the first of March each year, the bulk of final crop insurance decisions are made between that date and the sales closing date, in most cases March 15. As today is the first day of the discovery period, current futures prices for the DEC corn and the NOV beans are the current best guesses of the projected prices for 2013. Near mid morning, these were around $5.90 and $13.30 for corn and soybeans respectively. For comparison, the projected prices in 2012 were $5.68 and $12.55. Thus, the indemnity prices for crop insurance are higher at this point in time than last year around this date, and all else the same, would result in higher valued insurance compared to 2012. It should be noted that one effect of the drought and shorter crops in 2012 is that starting prices available for insurance are relatively more attractive than levels likely had a large crop been produced in 2012.

In addition to the market’s estimate of the expected value of the crop, a measure of the price risk is also needed to calculate the cost of insuring against revenue shortfalls. Option markets provide the market’s estimate of the cost of insuring against price declines or increases of various magnitudes, and in combination with the futures prices, provide a means to recover the entire price distribution describing possible future prices. The method used by RMA is related to the Black-Scholes option pricing model which relates the expected cost of insurance to the probabilities associated with all possible outcomes and their payoffs. The term “implied volatility” is derived from an approach that observes actual option values and tests for the measure of volatility that would most nearly result in the observed prices – in essence, the volatility implied by the observed prices. It can be expressed in a form analogous to the standard deviation of prices – a form that is more easily interpreted as percentage price movements and their associated probabilities of occurrence. A common rule of thumb is that about two thirds of the possible outcomes occur within one standard deviation of the average or expected value. Thus, if the projected price or expected value were $6 and the implied volatility indicated a standard deviation of $1.20 then there is a two thirds probability that prices will be between $4.80 and $7.20. Of course, higher volatility or more likely larger price movements result in higher values of insurance, and lower volatilities result in lower costs of insurance.

There are numerous commercial services available that report the implied volatilities associated with options and RMA uses one of these as the source of their starting value of price risk. However, the final feature discussed – harvest price – is a constructed average price available at the approximate time of harvest and is used to settle insurance contracts against a standard price thought to be applicable for a broad set of marketing purposes, and serving as a reasonable index for the price of crops actually grown that year. It is constructed by averaging the settlement prices for the DEC corn and NOV soybean futures contracts during the month of October, under a process similar to that for the establishment of the projected prices. Option contracts expire at different dates however, and thus the implied volatilities taken from option prices must be adjusted to be proportional to the interval of time over which the crop insurance is in force. By convention, the middle of the harvest price monitoring period is used to define the end of the option volatility interval. The technical approach to correct a longer-dated implied volatility is first to square the implied volatility, then multiply by the proportion of time between the date observed and the middle of the harvest price month compared to the overall implied volatility interval, and then takes the square root to convert back to a measure with a natural interpretation as the standard deviation during the insurance window. The final volatility factor used in premium setting applications is then constructed by averaging the result of this process over the final five trading days of February (rather than the entire month), rounded to two digits.

For illustration, if the projected prices and volatility factors were established at this moment on Feb. 1, they would result in the use of the implied price distributions shown in figure 1 below. Table 1 that follows provide implied probabilities associated with various percentiles – for example that the market views that there is a 25% chance that corn (soybean) futures prices will be below $4.96 ($11.65) on average in October, and that there is a 25% chance that they will be above $6.74 ($14.85) at that time. Other values can likewise be identified that correspond to areas under the curves shown in the figure. Of course, the specific values will change as the prices evolve in February, but the concept remains that the insurance costs reflect the possibilities of different outcomes weighted by their implied likelihoods in a manner as shown in the table and figures below. 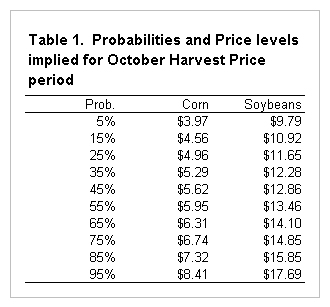 These are simply starting values or initial estimates of the projected prices and volatility factors that will be fully determined during the month of February. Changes during the month are particularly important for at least two reasons. First, the average may differ from the futures prices that exist and are available for market planning by the end of the month. For example, suppose prices trend steadily upward during February and the resulting average projected prices used to establish insurance values are below the current futures prices around March 1. In that case, there is already an increased likelihood that the harvest prices will be higher than the projected prices and insurance products that include harvest price options for guarantee increases are therefore relatively more attractive. If, however, prices generally decline in February, then the projected price will be above the market’s estimate of actual value and the use of insurance will start somewhat more “in the money” or more likely to result in payments. Secondly, the prices and volatilities can have large impacts on the premiums paid and the guarantee levels available for insurance. Table 2 below shows the current estimates of cost by coverage level for a farmer in McLean County Illinois with a Trend Adjusted APH of 183 bushels across three price and three volatility scenarios. The table is organized with three panels associated with different volatilities of .20, .22, and .24; and three sets of columns associated with projected prices of $5.70, $5.90, and $6.10. Within each block, coverage levels of 55-85% and Unit designs for Optional, Basic, and Enterprise are shown. For example, under a $5.70 projected price and .20 volatility, the cost per acre of Enterprise Unit RP insurance at an 85% coverage level would be $18.09/acre. If instead, projected prices were $6.10 and volatility were .24, the cost per acre would be $24.64, a 36% increase. The premiums can be particularly sensitive to changes in volatility. 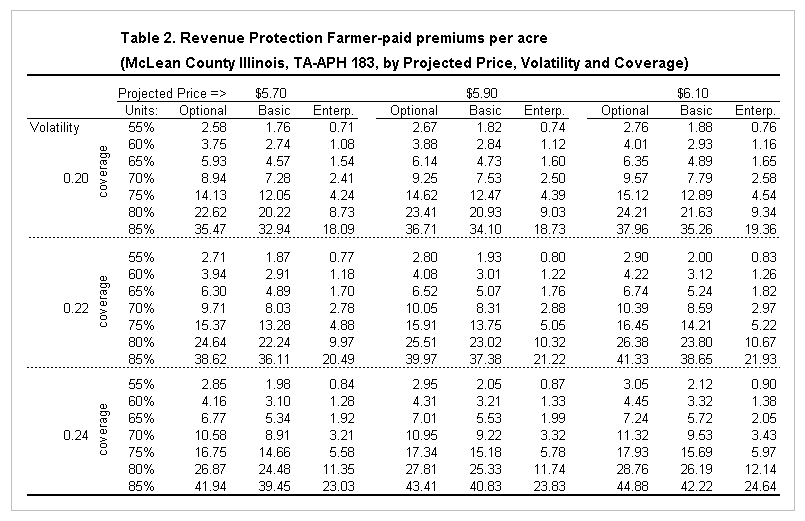 Returning to the harvest price factor, if the average futures prices are higher in October than the projected price, then for insurance products that include the harvest price option, the higher price effectively substitutes for the projected price in establishing the guarantee levels. For example, due to the drought related short crop, 2012 harvest prices were $7.50 and $15.39, for corn and soybeans in much of the cornbelt, effectively replacing the original projected prices of $5.68 and $12.55 for determination of guarantees and indemnities. For corn, the increase represented a price increase of 32% for corn and 23% for soybeans relative to starting prices and guarantees based on projected prices, thus improving the payouts considerably for many farmers.

As the month progresses, we will continue to update the tools and information available at the farmdoc website to help make effective crop insurance decisions in 2013.

1See http://www.rma.usda.gov/policies/cepp.html for complete details and time window definitions by crop and location.