Much of the Great Plains and western corn-belt still is in drought, leading to concerns about a drought in 2013. While a drought in 2013 is a possibility, a more likely scenario resulting in low crop revenue is declining prices combined with near normal yields. Herein, historical yield and price changes are used to illustrate potential revenue scenarios under drought yields, near normal yields, and above average yields. Then, situations in which low revenues occur from historical yield and price changes are identified.

This analysis is conducted using Illinois state yields. For each year between 1975 through 2012, the Illinois state yield is stated as a percent of trend yield. Trend yield represents the expected yield in each year given “normal” weather conditions. Trend yields are found by statistically fitting historical data with a straight line from 1975 through 2012. In 2012, the trend yield for Illinois is 163 bushels. Actual 2012 yield is 105 bushels. The yield stated as a percent of trend is 64% (.64 = 105 bushel actual yield / 165 bushel trend yield).

These yield-price change pairs are shown in Figure 1. As yield increases relative to trend yield, note that price change declines. There is a negative correlation between yields and price changes of -.54. Because Illinois is a large producer of corn and Illinois production is correlated with other large producing states, high yields in Illinois generally mean higher total supplies of corn, leading to lower prices for corn. 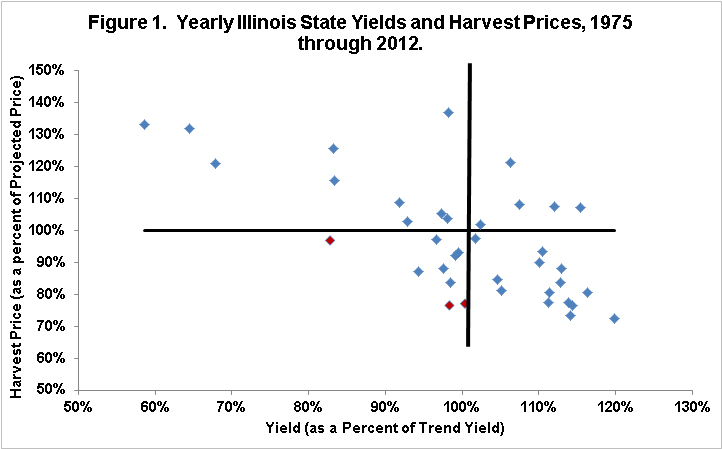 Average years are represented by arraying yields from lowest to highest and selecting the ten years in the middle of the range. The average yield in these ten “median” years is 101% of trend yield. These median years correspond to the pairs close to the vertical line in Figure 1. During these ten years, harvest price is 92% of projected price, indicating that historically average yields in Illinois are associated with slight declines in harvest prices.

There are twelve years in which actual yields are more than 10% higher than trend yields. During these twelve years, yield average 13% higher than trend yields. Prices declined in most of these years, although there are some years in which harvest price is above projected price (see Table 1). On average, the harvest price is 85% of the projected price during these high yielding years.

Based on the descriptions provided above, three scenarios are defined under which projected revenue for 2013 is calculated: 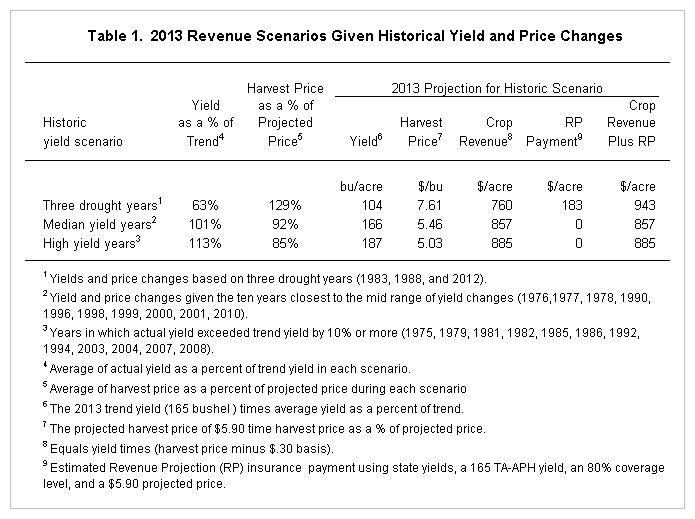 Using procedures detailed above, revenue for each year from 1975 through 2012 have been calculated. Lowest revenue occurs in:

Note that 1991 and 1977 have near normal yields, but large price declines.