This article uses 3 variables: (1) the index of prices received by U.S. farms for all the different types of crops they produce, (2) the index of prices U.S. farms paid for farm production inputs, interest, taxes, and wage rates, hereafter simply referred to as farm inputs; and (3) the U.S. Gross Domestic Product (GDP) price deflator. Economists commonly use the GDP price deflator as a broad measure of price inflation in a nation’s economy. The data on prices are from the U.S. Department of Agriculture (USDA), National Agricultural Statistics Service while the data on GDP deflator are from the Federal Reserve Bank of St. Louis.

To facilitate comparison of the two periods, the various price measures are indexed, also called benchmarked, to a year that predates the start of the period of prosperity. These benchmark years are 1972 for the 1970 period of farm prosperity and 2005 for the current period of farm prosperity. The latest calendar year for which price information is available is 2012, the 7th year after 2005. As a result, the 1970 period ends with 1979, the 7th year after 1972. There is no definitive way to decide when to start either period and other alternatives exist, but these are reasonable benchmark dates. As more data becomes available for the current period, the periods can be extended, but 7 years provides a long enough period for an initial comparative examination.

By both 1979 and 2012 (year 7 of each period), the index of prices that U.S. farms received for the crops they raised was appropriately double (200%) the index of crop prices at the start of the period (see Figure 1). However, the time path of prices during the two periods differs. Price increases were larger earlier in the 1970s. In contrast, price increases have been more consistent over the current period of prosperity, at least through 2012. 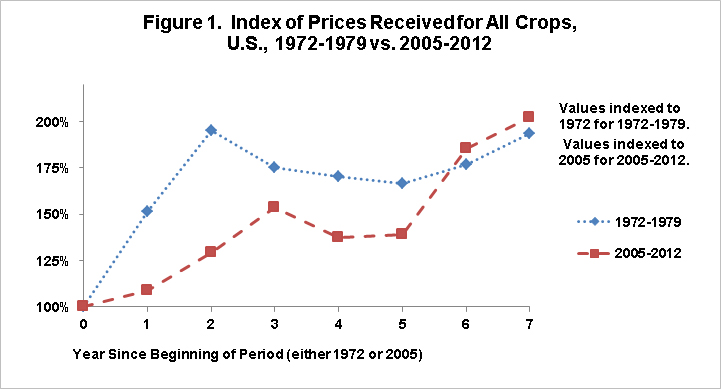 Another factor that affected crop prices in the 1970s was general economic price inflation. For example, the U.S. GDP price deflator was 64% higher in 1979 than in 1972. Thus, when examining data from the 1970s, it is common to deflate the data. For the sake of consistency, crop prices since 2005 are also deflated even though general economic inflation is much lower. The GDP deflator is only 15% higher in 2012 than in 2005. 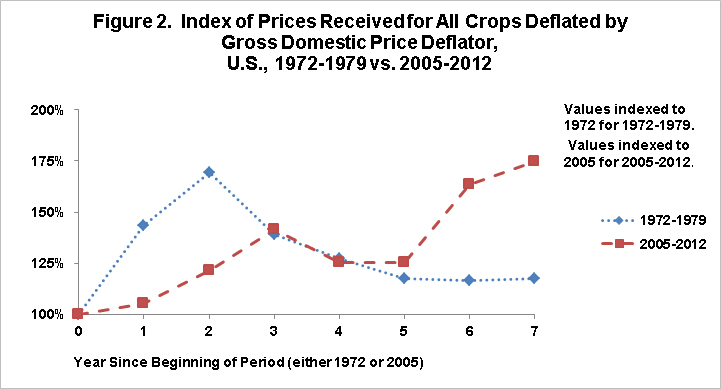 Figure 3 presents the ratio of the index of all crop prices received by U.S. farms to the index of prices U.S. farms paid for farm inputs. This ratio is an indicator of the profit margin in the U.S. crop sector. The higher is this ratio, the more favorable is the crop sector’s economic situation. It would be useful to adjust the index of prices paid for farm inputs for input productivity, but 2009 is the latest year for which U.S. farm sector productivity is available. For a discussion of this adjustment and its impact, see the farmdoc daily post, “Prices Paid for Farm Inputs vs. Prices Received for Crops: Implications for Managing Risk and Farm Policy,” available here.

The ratio of crop prices to farm inputs was 48% higher in 1974 (year 2) than in 1972. It then began a decline that continued through 1979 and beyond. By 1978, the ratio was less than the ratio in 1972. The decline did not end until the drought and large government acreage reduction programs of 1983.

Both the period of U.S. farm prosperity during the 1970s and the current period of U.S. farm prosperity experienced sizeable increases in crop prices, whether measured in nominal prices, real deflated prices, or relative to crop input prices. However, notable differences exist between the time paths of prices during each period. The differences become more pronounced if crop prices are adjusted for general economic inflation or examined relative to farm input prices.