The prices that U.S. farms receive for crops have increased far less than have the prices U.S. farms pay for inputs. This difference is often presented as an indication of the economic pressure U.S. farms confront and thus used to justify the need for a farm safety net in general and price supports in particular. This article examines in greater detail the differential trends in crop output and farm input prices, drawing implications for managing risk and farm policy.

This article uses 3 variables: (1) the index of prices received by U.S. farms for all the different types of crops they produce, (2) the index of prices U.S. farms paid for farm production inputs, interest, taxes, and wage rates, hereafter simply referred to as farm inputs; and (3) the total factor productivity of the U.S. farm sector. The analysis starts with 1948 and ends with 2009, the first and latest years for which the productivity data is available. The data on prices are from the U.S. Department of Agriculture (USDA), National Agricultural Statistics Service while the data on productivity are from the USDA, Economic Research Service.

Total factor productivity is a measure of the output generated by U.S. farms relative to the total quantity of inputs used by U.S. farms to produce the output. Inputs include capital inputs, such as land, equipment, and buildings; as well as variable inputs, such as hired and self-employed labor, chemicals, fertilizer, energy, services, and inputs that originate on the farm. In short, total factor productivity measures aggregate U.S. farm output per unit of aggregate U.S. farm production input. 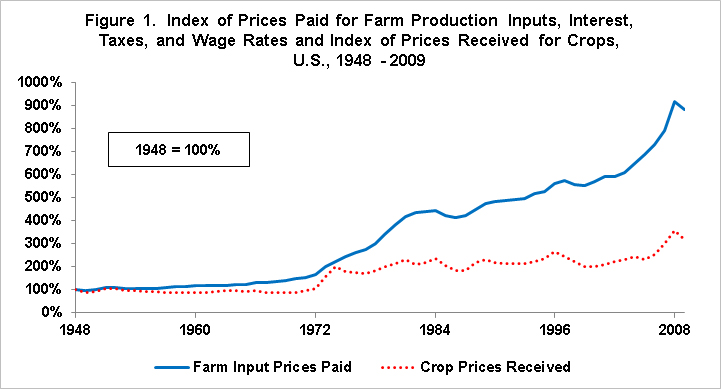 Farms can afford to pay more for inputs whose productivity has increased. Higher productivity means more output is generated per unit of input. To adjust for this consideration, the index of prices paid for U.S. farm inputs is divided by the total factor productivity of inputs used by the U.S. farm sector. As Figure 2 illustrates, this adjustment essentially results in crop prices and farm input prices largely tracking each other, thus eliminating the difference in their long term trends. In other words, the increasing productivity of farm inputs largely explains the larger increase in farm input prices relative to the prices paid to farms for crops. The finding also is consistent with the considerable time spent by business, management experts, and the farm media on helping farms understand technological change, especially as it relates to input productivity. 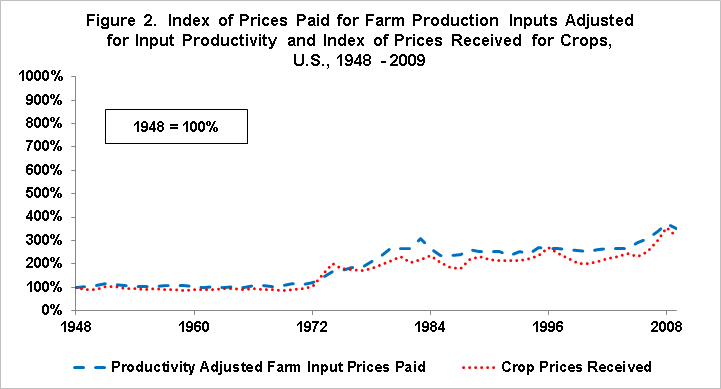 To assist in understanding the implications of this analysis, Figure 2 is reconfigured as Figure 3. Figure 3 presents the ratio of crop prices to farm input prices adjusted for farm input productivity. To aid interpretation, this ratio is standardized by setting the average ratio over 1948 -2009 equal to 100%.

The higher is this ratio, the more favorable is the crop sector’s economic situation. The highest ratios occur in 1973, 1974, and 1975, or during the prosperity of the 1970s. On the other hand, during the difficult economic times of the 1980s, most of the ratios were less than 100%. This period of economic difficulty is often seen as a response to the prosperity of the 1970s. In addition, Congress sharply increased support prices in the 1981 Farm Bill. This policy decision deferred needed adjustments by farms, thus prolonging the period of adjustment and perhaps made the adjustment even worse. Currently, many farm groups support large increases in U.S. target prices in the next farm bill. If such increases come into existence, it will be interesting to see if similar consequences occur.

Over the period of this analysis no trend exists in the ratio of crop output prices to farm input prices adjusted for input productivity. A linear trend explains less than 1% of the variation in the ratio. Moreover, from 1948 through 1972 the ratio averaged 99%, exactly the same as since 1996.

Since 1948, major changes have occurred in the U.S. crop sector and the U.S. farm safety net. Prior to 1972, U.S. crop farms were much smaller than today and a large share also raised livestock. U.S. farm policy consisted of price supports fixed at levels above market clearing prices, implemented via large acreage set asides and large public stocks. Since 1996, the U.S. has had no acreage set asides, few public stocks, and no floor on prices. The similarity in the ratio of crop output prices to farm input prices adjusted for input productivity throughout these major changes suggests that the ultimate beneficiaries of extended farm safety net support are the providers of farm inputs. Agricultural economists have long focused on the price of land as a beneficiary of farm programs, but Figure 3 suggests providers of all inputs may benefit. The simple explanation is that extended farm supports improve the ability to buy inputs, which results in higher input prices.

Figure 3 thus calls into question the wisdom of a farm safety net that provides extended support to U.S. farms. If U.S. society desire to help U.S. farms through periods of economic stress, temporary supports that phase out are preferable. Supports that phase out will not translate into higher input prices. Higher input prices reduce the international competitiveness of U.S. farms and raise the cost of U.S. farm products to U.S. consumers. However, as Figure 3 also illustrates, there were 3 periods in which the ratio remained below 100% for 6 consecutive years: 1967-1972, 1978-1983, and 1998-2003. Thus, the period of adjustment will likely extend beyond the 1-year time window of the current crop insurance program. The same conclusion was reached in the farmdoc post on the persistence of low and high farm prices, available here. 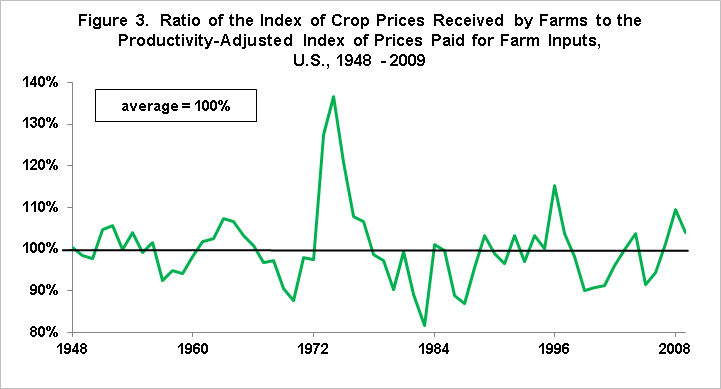