On March 8 we wrote about the sharp increase in the price of ethanol (D6) RINs since the first of the year. There, we indicated that the E10 blend wall would require RINs credits to be used to meet part of the RFS mandate in 2013 and beyond, increasing the value of those RINs credits. As indicated in Figure 1, the price of 2013 (current year) vintage D6 RINs remains high. The price was quoted at $0.685 per gallon on March 21, 2013, after peaking at nearly $0.90 two weeks ago. 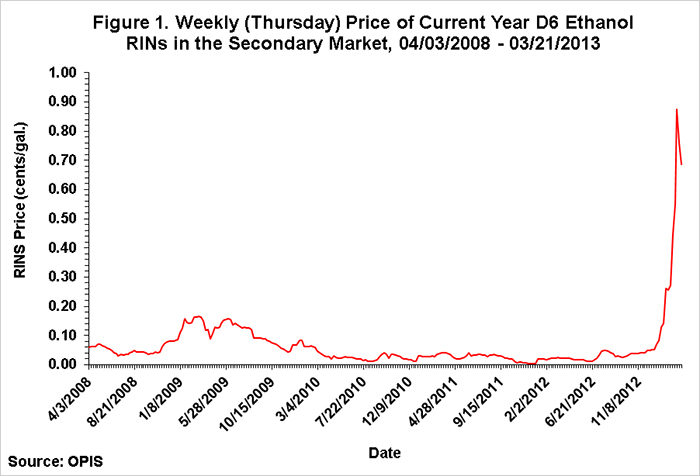 The high price of D6 RINs has received a lot of attention within the petroleum industry, the biofuels industry, in the main line media, and in Congress. Conclusions about the potential impact of high RINs prices on the cost of complying with RFS2 and the price of gasoline in 2013 have ranged from no impact to a full pass through of the higher prices to retail gasoline prices. As a result the proposed responses to the high prices have ranged from calls to sharply amend the RFS2 requirements to demands that the petroleum industry implement E15 at a much more rapid pace.

The diverse nature of the obligated parties and their business models means that some parties (typically non-integrated refiners and importers) routinely blend less ethanol than their Renewable Volume Obligation (RVO) under the RFS2 and must purchase RINs to meet their RVO. Conversely, some obligated parties (typically downstream blenders) blend more ethanol than their RVO and therefore have RINs to sell. When RINs prices are low, the need to buy RINs is not a large financial burden and the returns from selling RINs are modest. That was generally the case until early 2013 (Figure 1). It is also worth noting that this is how the EPA expected the program to work when it was originally set up.

When RINs prices become high, as they are now, then those who must routinely buy RINs to meet their RVO are financially disadvantaged and have a clear incentive to pass along the higher prices in the supply chain to the degree it is feasible. As an example, consider the extreme case of an obligated refiner with no blending capacity. In order to recoup a $0.68 cent RIN associated with a 10% RVO, the wholesale price of each gallon of blendstock (RBOB or CBOB) produced would have to increase by approximately $0.07. At the same time, those selling excess RINs would enjoy a large financial return and might be able to absorb a higher price of blendstock without passing the higher cost downstream. If only obligated parties were involved in the RINs market, the pattern of losses and gains on RINs and gasoline could be a zero sum game. That is, losses incurred by buyers of RINs or buyers of blendstock would be offset by the gains of those selling RINs or selling blendstock. Even then, it is not known how much of that zero sum effect could be easily accomplished within integrated firms and how much would be negotiated across non-integrated firms. In addition, there are other participants in the RINs markets, including non-obligated parties in the supply chain and third parties who are not a part of the motor fuel supply chain but have obtained ownership of RINs. As a result, the trading of RINs by obligated parties is not a zero sum game and the magnitude of net losses or gains to obligated parties in total is not known. Even if the total was known there would still be considerable uncertainty about how losses and gains were distributed across firms in the supply chain. In sum, it is difficult to nail down precisely the impact of current high RINs prices on the cost of RFS2 compliance and retail gasoline prices.

This situation does not mean we are left totally in the dark about the possible impact of rising RINs prices. It is still useful to examine recent prices of CBOB, ethanol (with RINs attached), and RINs and see if the trends provide clues about the impact. We examine the CBOB price since CBOB constitutes about two-thirds of the blendstock used to make finished gasoline in the U.S. As shown in Figure 2, the wholesale price of CBOB gasoline at Chicago generally declined during the last quarter of 2012, but started moving higher in late December, prior to the start of the rally in D6 RINs prices. CBOB prices peaked in mid-February and by March 21 were below the level of early October. RINs prices started moving higher in January and peaked near $0.90 in early March and then declined modestly. The timing of the increase in CBOB gasoline prices predates the increase in RINs prices by several weeks, which casts doubt on RINs prices as a significant driver of gasoline blendstock prices. In addition, CBOB prices were lower in late March than in October, further suggesting that factors other than RINs prices dominated CBOB prices.

Figure 2 also shows that ethanol prices (with RINS attached) and RINs prices moved in a more concurrent manner. The beginning of the upward move in ethanol prices right after the first of the year parallels the start of the rise in RINs prices. The two series continued to move roughly in tandem during February and March, although the RINs price rise clearly accelerated relative to ethanol in the second half of February. The higher ethanol and D6 RINs prices since January suggest that either (1) the higher RINs prices contributed to the higher ethanol prices or (2) both prices reacted in a similar fashion to a third variable. This raises the possibility that increasing RINs prices fed into higher pump gasoline prices through higher ethanol prices. It is, of course, important to keep in mind the simple arithmetic of this pathway: a given increase in ethanol prices will cause only a 10% increase in retail gasoline prices due to the use of 10% ethanol blends (E10). For example, the increase in the wholesale price of ethanol since the first of the year is $0.40. All else equal, this implies an upper bound estimate of the pump price impact of $0.04 per gallon through the ethanol pathway. 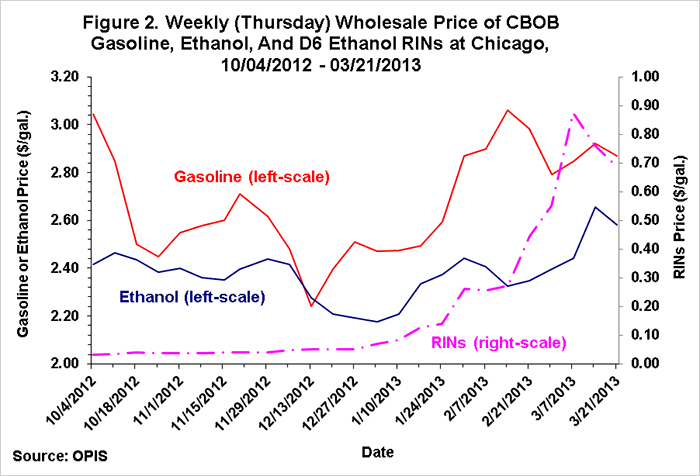 The impact of higher RINs prices on the cost of complying with RFS2 and the implications for retail gasoline prices is not easy to quantify. The interaction of obligated parties in the gasoline supply chain under the RFS2 is particularly complex. Nonetheless, the basic zero sum nature of relationships in the supply chain and recent price trends for CBOB blendstock and ethanol suggests that the impact, if any, has likely been small, at most a few cents.

Importantly, the E10 blend wall and current high prices of D6 RINs may be revealing a significant flaw in the way EPA designates obligated parties for RFS2. In 2010, EPA considered, but rejected, the alternative of moving all RVOs downstream of refineries and importers to those who supply finished gasoline at the retail level. This change would have resulted in a more homogeneous group of obligated parties and better aligned an obligated party’s RVO with access to RINs. Such a re-alignment may have precluded some of the current diverse impacts of high RINs prices on obligated parties and minimized the cost of RFS2 compliance. Adjustment in this direction would seem to be a sensible policy response in light of the drastically changed market circumstances since the RFS was originally passed in 2005 and modified in 2007.

The narrow focus on RINs prices also diverts attention from the broader issue of ethanol blending economics and how energy market participants, including consumers, have shared the mostly positive returns to ethanol blending over the past several years. We will address this issue and other issues related to RINs pricing, E85, and biodiesel in future posts.