The objective of this post is to provide a brief explanation of the underlying cause of the recent very sharp increase in the price of ethanol (D6) RIN credits and to identify the factors that might influence future price direction. As described in an earlier post by Nick Paulson, “RINs are the basis of the accounting system created by the Environmental Protection Agency (EPA) for use in enforcing the fuel mandates outlined under the RFS2. A RIN is a 38-digit number assigned to each gallon or batch of renewable fuel produced or imported into the U.S. Each RIN travels through the supply chain with the biofuel it is associated with until it is separated, at which point the RIN can be applied towards the mandate of an obligated party (fuel blender) or traded among other obligated parties or speculative traders, potentially for application towards the mandate at a future time. Thus, the RINs system allows obligated parties to meet their individual mandates by applying RINs representing biofuels which they have physically purchased and blended, or those which were purchased from another party through RIN trading.”

Until very recently, the price of ethanol (D6) RINs traded at a relatively low price and in a relatively narrow range (Figure 1). The low value of the D6 RINs from late 2009 through 2012 reflected the combination of the positive profitability of blending ethanol and the large inventory of excess RINs. As long as ethanol blending was profitable, the blending mandate was not substantially larger than the blend wall, and RIN credits were in plentiful supply, the value of D6 RIN credits to meet the blending mandates was low.

So what has changed? As indicated in Figure 1, the price of 2012 vintage D6 RINs exploded beginning in early 2013. The price moved from about $0.05 per gallon at the end of December to about $0.26 in early February and is now over $0.70 per gallon. Some have incorrectly attributed the price increase to concerns about prospects for lingering U.S. drought conditions, continued high corn prices, and limited availability or high price of ethanol. The declining price of December 2013 corn futures, however, actually implies that recent precipitation has reduced concerns about the size of the 2013 U.S. corn crop, at least for now. 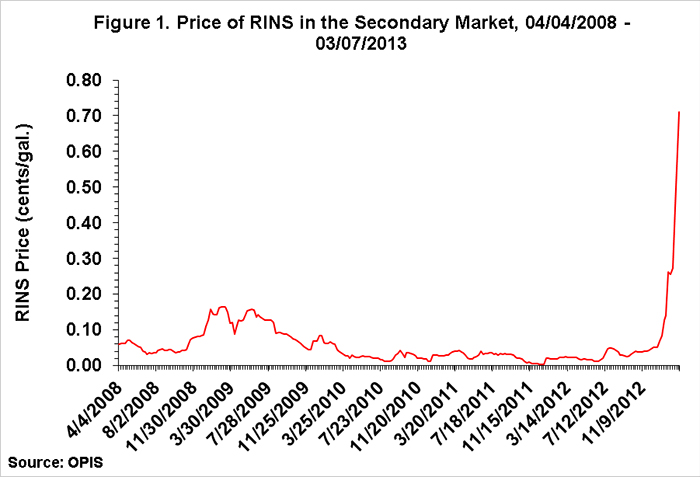 The underlying reason for the increased value of D6 RINs lies in the impending collision of the blend wall for E10 and the rising renewable (ethanol) mandate under the RFS. This situation results in the prospect for a sharp draw down in D6 RIN stocks in 2013 and 2014 as physical blending of ethanol, due to the blend wall, falls further and further behind the mandate levels. This is a message that we have been conveying since last September (see this post) and was highlighted again in this post of a month ago. We have not been alone in warning about this situation. Colleagues at the University of Missouri published a report in December that was aptly titled, “A Question Worth Billions: Why Isn’t the Conventional RIN Price Higher?”

Table 1 is reproduced from our post last month. The inventory of D6 RIN credits on January 1, 2013 was thought to be near 2.6 billion gallons. With ethanol blending expected to fall below the mandated level this year, RIN stocks could be reduced to about 1.2 billion gallons by year-end. With slow growth in the ethanol blend wall and a larger blending mandate in 2014, the stock of RIN credits could be depleted in calendar year 2014. The prospect of not being able to meet ethanol blending mandates with physical blending and prospects for a rapid decline in the stock or RIN credits in the very near future has substantially increased the value of D6 RINs. The mystery, then, is not that RIN values have increased to what appears to be inflated levels, but why it took so long for the well-advertised impending blend wall problem to be reflected more rationally in D6 RIN values.

The speed and magnitude of the recent increase in the price of D6 RINs is indeed startling. The run up in prices may include some unusual speculative buying, but the value of D6 RIN credits is fundamentally supported by the ethanol blend wall. Two possible developments could alter that fundamental support and result in declining RIN values. First, a more rapid expansion of ethanol blending through E15 or E85 would expand the blend wall and reduce the demand for D6 RIN credits to meet the renewable (ethanol) biofuels mandate. Second, a reduction in the RFS mandate for renewable fuels would also reduce the demand for D6 RIN credits. While neither of these developments is on the immediate horizon, developments should be closely monitored. Without a resolution to the ethanol blend wall issue sometime soon, a portion of the renewable (ethanol) mandate beginning in 2014 may have to be satisfied with advanced biofuels or advanced biofuels RIN credits (D4 or D5) , most likely biomass-based biodiesel (D4). If that is the case, the price of D6 RINs could be supported up to the price of D4 biodiesel RINs. Those D4 RINs are currently trading at about $.10 premium to D6 RINs.