The Illinois Society of Professional Farm Managers and Rural Appraisers conducts an annual study of farmland prices and cash rents (see here). As part of this process, the Society asks its membership what cash rents will be for the upcoming production year. Society members indicate that the 2013 cash rents for farmland with expected corn yields over 190 bushels per acre will be $396 per acre, up $17 from the 2012 rent of $379 per acre.

The Society asks its members for cash rents of four farmland classes: 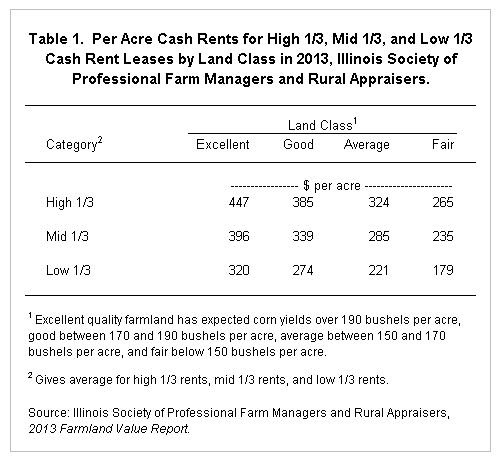 These ranges largely exist because of differing relationships between landlord and tenants and because of difference in return desires of landlords. These ranges would be larger if all – and not just professionally managed – farmland had been included. The ranges point out that relying on simple averages to gauge the farmland markets misses a great deal of the variety. 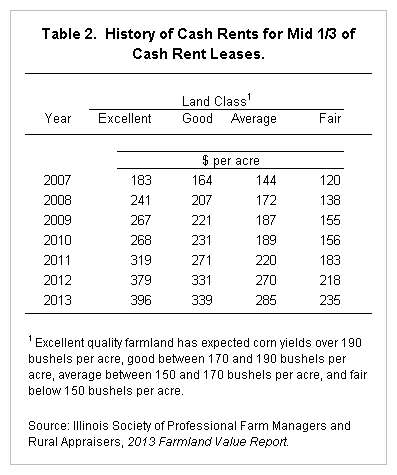 The Illinois Society of Farm Managers and Rural Appraisers annually publishes a booklet that gives detailed information on farmland prices and rents for ten regions in Illinois. Information on ordering this booklet can be found on the Illinois Society of Professional Farm Managers and Rural Appraisers website at the following page: http://www.ispfmra.org/2013/03/2013-illinois-farmland-values-lease-trends/.