USDA’s 2013 Planting Intentions report provides detail on prospective plantings by state. These state figures will change as plantings progress through the growing season. Moreover, these state values have a margin of error around them. Hence, one should not read too much into state changes at this point. Given these caveats, state acre changes are interpreted below, as many of the state changes continue trends observed in recent history (see here).

Nationally, corn acres are expected to be near the same in 2013 as in 2012: 97.3 million acres in 2013 as compared to 97.1 million acres in 2012. While the national acreage is expected to remain the same, shifts across states are projected. Illinois is projected to loss 600,000 acres. Many expected a decline in Illinois acres, as corn-after-corn yields have experience large yields drags in central and southern Illinois in the last two years, leading some farmers to shift away from corn to soybeans.

It is interesting to note that corn acreage is projected to decease in states where the 2012 drought was the worst: Illinois (-600,000 acres), Missouri (-200,000), Indiana (-150,000), Kansas (-100,000) and Kentucky (-50,000). In other corn producing acres where the drought had less of an impact on yields, corn acres are projected to remain the same or increase: Iowa (no change), Minnesota (250,000 increase), and North Dakota (500,000). The drought areas experienced adverse conditions leading to larger corn-after-corn yield drags. It will be interesting to see if Iowa, Minnesota, and North Dakota experience corn-after-corn yield drags when more adverse years occur, leading to reduced corn acres. 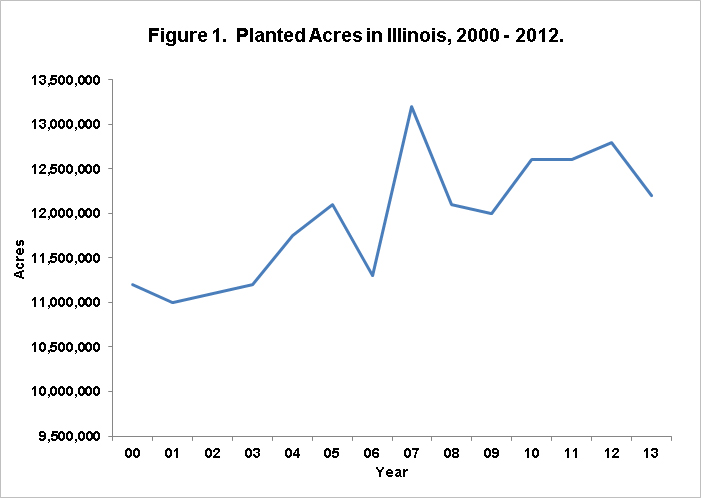 The 2013 prospective plantings for cotton of 10.0 million acres is down 2.3 million acres from the 2012 level. Forty-five percent of the decline is attributed to Texas, with a -1 million acre decline between 2012 and 2013. Other states with large declines include Arkansas (-325,000) and Mississippi (-205,000). Cotton acres have generally been on a downward trend in recent years.

State changes contained in the 2013 Prospective Plantings report largely are expected and do not signal major shifts from previous trends.