USDA’s release of the 2013 Planting Intentions report again focuses attention on acreage shifts between crops. Herein, historical acre changes across counties are documented for corn, soybeans, wheat, and cotton; four crops with large acreages. Examining these changes documents geographical changes having occurred in the past, perhaps providing indications of any acreage changes that may occur in the near future.

Planted acres per county for corn, soybeans, wheat, and cotton were obtained from the QuickStats tool available through the National Agricultural Statistical Service (NASS) website. With the exception of cotton, changes in county acres between 2006 and 2012 are reported in the following graphs (county change = acre in a crop in 2012 – acre in a crop in 2006). For cotton, acre changes are to 2011 rather than 2012, as planted acres are not available for 2012. The year 2006 was chosen as the base period, as this was the first year of a sustained increase in prices most crops have experience.

Each county with an acre listed for 2006 and 2012 (2011 for cotton) are documented in the following graphs. In certain cases, some counties with zero or low acres in either year may not be indicated on the graph, as NASS does not report acres for a crop when acres are low.

On a national basis, acres in the four crops exhibited the following changes:

Given the large increase in corn acres, it is no surprise that corn acres increased in most counties across the greater Corn Belt from western Ohio through Nebraska (see Figure 1). Several counties in Illinois, Iowa, Minnesota and Nebraska had increased acres between 30,000 and 60,000 acres. 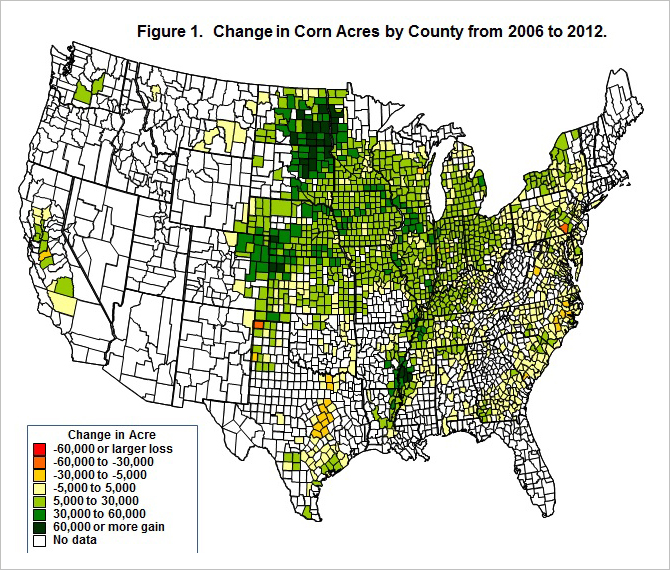 A large contiguous set of counties in eastern North Dakota, northeast South Dakota, and western Minnesota had acreage increases of over 60,000 acres. This area in the Upper Midwest had a most pronounced change of corn acres of any area in the country.

Other areas of increase include the Mississippi Delta, with several counties in west central Mississippi having corn acres increase of over 60,000 acres. Large acreage increases also occurred in an area centered on the junction of Kansas, Nebraska, and Colorado.

There were a few areas that lost corn acres. Several contiguous counties in mid-central Texas and in eastern North Carolina lost between 5,000 and 30,000 acres. 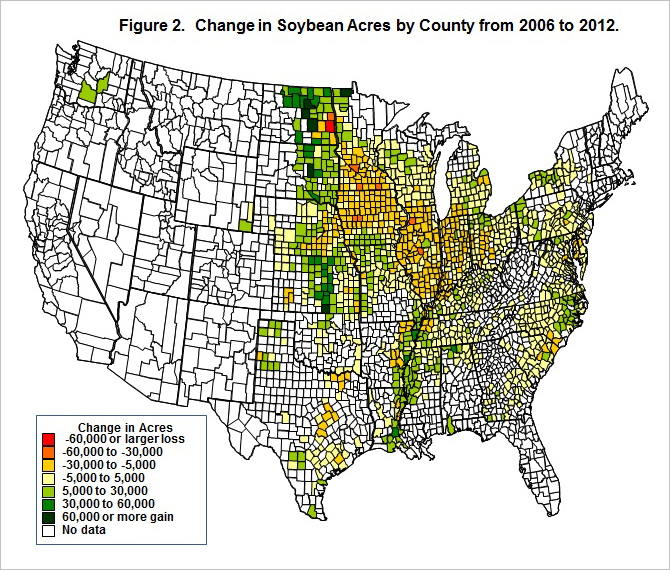 These acreage declines in the Corn Belt are more than offset by increases in the other areas, with the following regions standing out: 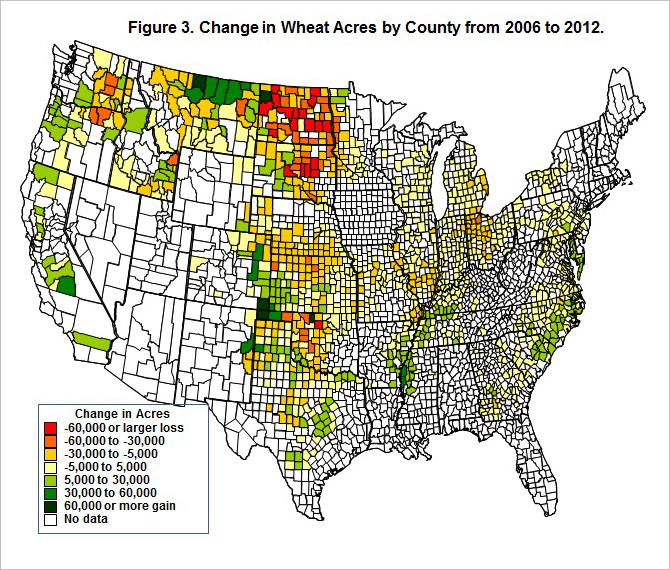 Most areas lost acres. A notable area of loss was in North and South Dakota, where a number of counties had 60,000 or more acres of decrease. Acres also decreased in counties along the Nebraska and Kanas border. 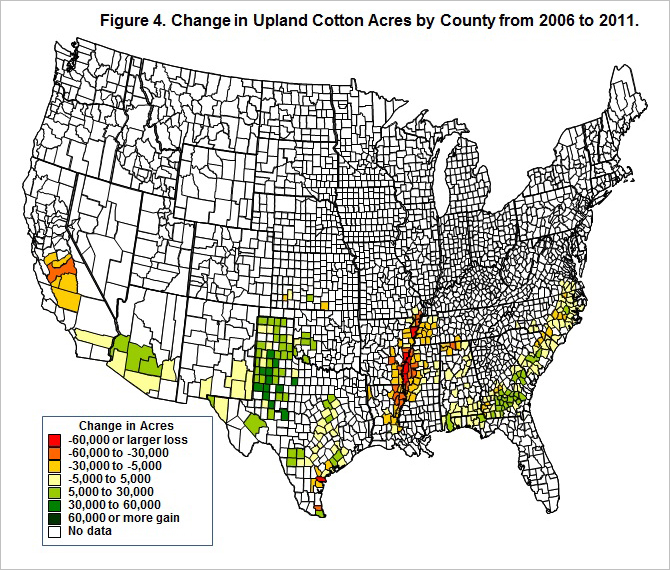 Some of the more pronounced regional changes in crop production are:

Much of the acre shifts between 2006 and 2012 occurred in the Corn Belt, the Dakotas and the Mississippi Delta. It is likely that these areas will be the focus during the 2013 planting season.