Congressional markup of a new farm bill is currently expected to begin during May. This post examines some of the considerations that will underpin the debate and thus frame the details of the crop safety net.

The mix of crops grown in the U.S. is in a constant state of flux. However, the elimination of annual acreage set asides in the 1996 Farm Bill allowed U.S. farms to decide what crops to produce, with the exception of restrictions on fruit and vegetable production. This policy change in concert with the development of the corn ethanol market has resulted in sizable acreage shifts among crops. Among what are often referred to as the major program crops, only corn and soybeans have more planted acres during the last 5 crop years (2008-2012) than in the 5 crop years preceding the elimination of set asides (1991-1995). Moreover, except for rice, these crops have experienced double digit declines (see Figure 1). The same conclusion results when acreage shifts are examined from the perspective of farm policy by comparing 2008-2012 planted acres with program base acres which determine payments by some safety net programs (see Figure 2). The importance of these acreage shifts to the current farm bill debate is that the U.S. corn and soybean sectors rarely ponder their potential disappearance from the American farm portfolio. Such is not the case with the other program crop sectors. At present, this concern is especially prevalent among the southern crops of cotton, peanuts, and rice. Needless to say, concerns over long term survivability will alter the perspective brought to the farm policy debate. 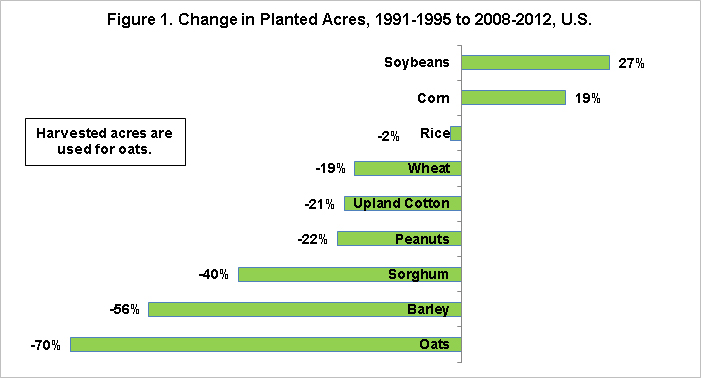 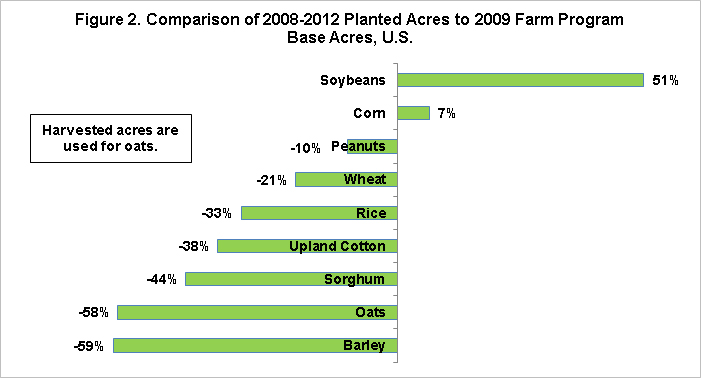 The elimination of set asides in the 1996 Farm Bill has created consequences with which the U.S. is still grappling. Annual acreage set asides allowed policy to be adjusted between Congressional Farm Bills. If costs increased for either crops in general or a specific crop, set asides could be increased in general or for the specific crop to reduce costs. The ability to annually adjust policy reduced the importance of accurately predicting program costs. In developing policy, we usually assume normal weather, both here and abroad. But, weather is rarely normal. In addition, technological change is difficult to forecast. Yield has trended up over time, but the trend often looks more like a staircase in which periodic jumps occur. Because forecasting is so difficult and despite the best intentions of policy makers, fixing support prices will generally lead to costs that exceed budgeted amounts or to a program that provides little assistance. Fixed prices that are high relative to market prices will affect the mix of crops planted in the U.S. and shelter U.S. farms from making production adjustments. Since most U.S. crops are exported, farms in other countries will likely bear more of the adjustments. This outcome increases the likelihood of international trade law suits, such as happened when Brazil sued the U.S. over its cotton program.

Distribution of Spending by Program Type among Crops

An important feature of the debate surrounding the next farm bill is the proposed elimination of direct income payments. The commonly-accepted reason for this proposal is the difficulty in defending roughly $5 billion in annual direct payments when crop income is at record high levels.

However, this proposal differentially affects the program crops. Figures 3 through 5 contain the share of payments by farm safety net category relative to sales by crop over the 2003 through 2012 crop years. The categories are direct payment, price risk programs, and crop insurance. Price risk programs are the Farm Bill Title 1 programs that make payments when price is below a support price. Currently, they are the counter-cyclical and marketing loan programs. Marketing loan payments include certificate gains. Net payments by crop insurance are the difference between insurance indemnities paid to farms minus premiums paid by farms. The graphs begin with 2003 because this was the first crop year for the counter-cyclical program. Figure 6 presents total payments relative to crop sales. Payments total $50.1 billion in direct payments, $29.7 billion in Title 1 price risk payments, and $28.1 billion in net crop insurance payments. 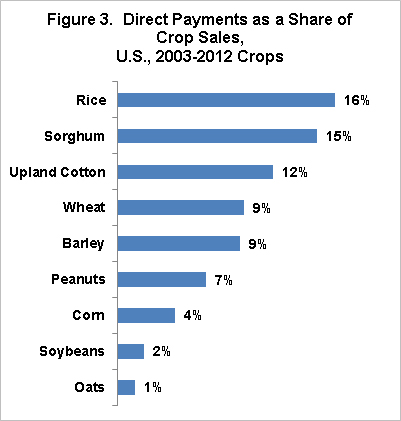 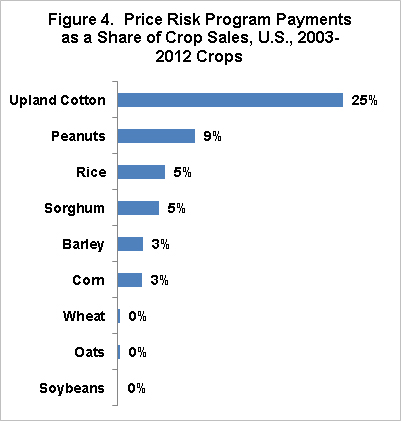 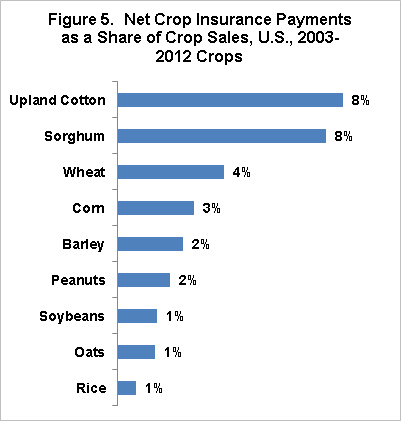 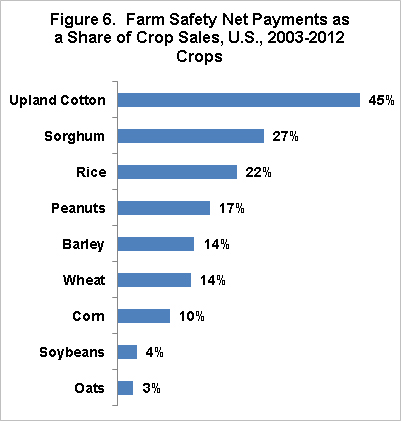 Sorghum and, especially upland cotton, rank high in each safety net program category. In contrast, ranking of the other crops varies notably among the categories. Of particular interest to the current debate, direct payments to rice are 16% of rice sales while net crop insurance payments to rice are only 1% of rice sales. Direct payment share exceeds the net crop insurance share by 5 or more percentage points for sorghum, barley, and peanuts. For corn and soybeans, the difference is only 1 percentage point. In short, different farm programs have different payment profiles among crops.

Crops most affected by the loss of direct payments are, unsurprisingly, trying to find ways to retain their share of farm safety net spending. One approach that has been proposed is to try to differentially increase payments by the counter-cyclical program by adjusting target prices in a way that most benefits the crops with the greatest loss of direct payments. This proposed approach is consistent with the target prices contained in the House Agriculture Committee’s 2012 farm bill proposal (see farm post here). However, this approach could lead to challenges at the World Trade Organization (WTO) if crop prices decline and stay below the target prices. While the ruling on the Brazil-U.S. cotton case is not definitive, to many observers it suggests that high fixed target prices that remain above market prices for an extended period can be potentially challenged as trade distorting.

To this policy observer, the key policy innovation in this farm bill debate is the cotton STAX program, which is designed to be a response to the WTO ruling on cotton. STAX is essentially a county-based insurance program that can be added onto individual crop insurance. Most observers consider it unlikely that Brazil would accept a STAX program with a fixed support price. The structure of STAX that comes out of this farm bill is potentially important because it could establish the template for future U.S. farm policy. From this perspective, an interesting question is whether Brazil would accept a support price that moves with the market. For example, the price in STAX could be the higher of the insurance price for the current year or a moving average of price over a specified number of years.

If the desire is to provide more money for some crops than is associated with programs that are based on market prices, such as crop insurance and the ACRE farm program; a couple of options might exist within the confines of the WTO cotton case. One is to have a multiplier in crop insurance that is crop specific. The STAX proposal in both the Senate and House Agriculture Committee 2012 farm bills had a multiplier of 1.2 and the existing county insurance programs have a multiplier that can be as high as 1.5. Such a decision to have differential multipliers by crop would likely mean that actuarial soundness of insurance would have to be on a crop basis rather than for the entire insurance program. Another approach would be to return to some form of a direct payment program. For example, direct payments could be retained for rice and peanuts, but payment acreage could be updated to current planted acres. As Figure 2 illustrates, updating direct payment program acreage offers the potential for significant reduction in the cost of direct payments if the updating is confined to crops that have lost planted acres.

In summary, the current U.S. farm policy debate must navigate itself through the concerns over the future of some crop sectors, must take into account the different payout structures for different crops by different farm safety net program designs, and must be aware of the desirability of annual adjustment mechanisms that reduce the likelihood of WTO challenges. Failure to navigate these concerns in a way that satisfies each crop sector will likely increase the odds that this year’s debate will end up with last year’s decision to extend the current farm bill for another year.