The period of high grain farm incomes since 2006 has led to an overall strengthening of balance sheets on grain farms. Some concerns exist that much of this strengthening could erode quickly during a period of lower returns and declining farmland prices. While these concerns are legitimate, farmers have generally prepared themselves well to withstand lower returns. How much financial stress farms face likely will depend on the ability to curtail capital expenditures and family living withdrawals once a lower returns environment occurs.

Assets Values, Liability Values, and Debt-to-Asset Ratios from 2005 to 2011

Table 1 shows balance sheet information for a select group of grain farms enrolled in Illinois Farm Business Farm Management (FBFM). These grain farms receive a majority of their incomes from grain farm operations and have balance sheet and income statement information that are certified usable by FBFM field staff. In Table 1, per acre values of selected asset categories, total assets, and total liabilities are shown. All assets are valued at their fair market values. Also shown is the debt-to-asset ratio. This information is summarized through 2011. Data for 2012 has not been summarized yet. Inclusion of 2012 likely will not change trends illustrated in Table 1. 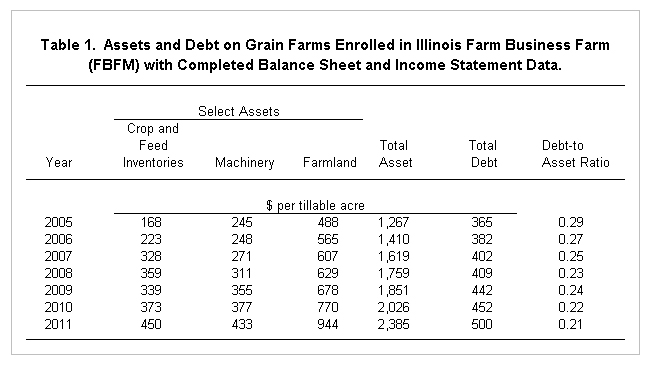 Total assets also have increased from $1,267 per tillable acre in 2005 up to $2,385 per tillable acre in 2012. This represents an 88% increase in total assets from 2005 to 2011. In Table 1, values of three asset categories are given: crop and feed inventories, machinery, and farmland. These three categories account for roughly three-fourths of total assets. Notes on these specific assets are:

Overall, the asset and liability situation has strengthened over the 2005-2011 time period; however, some concerns still exist. Debt has increased, potentially causing cash flow problems in a lower income environment. However, there are several reasons why debt has increased. Operating and equipment costs have increased over the time period which could necessitate larger operating and machinery loans. Perhaps more important, interest rates have been low in recent years, which could provide an incentive to use debt capital rather than equity capital.
Some concern exists that much of the increase in total assets is related to farmland price increases. Forty percent of the increase in total assets from 2005 through 2011 is accounted for by an increase in farmland asset values. A decline in farmland prices would reduce asset values and increase debt-to-asset values. For example, a return to 2005 farmland asset values in 2011 would increases the debt-to-asset ratio from .21 to .26. The .26 debt-to-asset value is above the 2011 value, but would not represent a return to the 2005 debt-to-asset ratio of .29.
Machinery values have increased during the entire time period. This may represent a source of financial strength during a lower income environment. Many farmers have built machinery inventories such that machinery purchases may not be needed. Therefore, machinery purchases may be able to be reduced when low incomes return.
Overall, average asset and liabilities shown in Table 1 suggest that the grain farm sector is relatively strong. On average, farmers have stronger financial positions today than in 2005 and could withstand lower incomes. Note, however, that these values are averages. There are farms with much higher debt-to-asset ratio values than those shown in Table 1. Those farms could face financial stress during a downturn.

Overall, the asset and debt situation presented by averages across farms present few warning signs. When grain farm returns inevitably become lower, the initial responses to low prices likely will set up the ability of farms to withstand financial adversity. A recent report by the Kansas City Federal Reserve Bank (here) suggests that farms have difficulties reducing cash flows during the first years of lower returns, leading to a worsening financial situation. This suggest the ability to curtail capital expenditures and family living withdrawals in the face of lower returns may be critical to avoiding financial stress when returns fall.