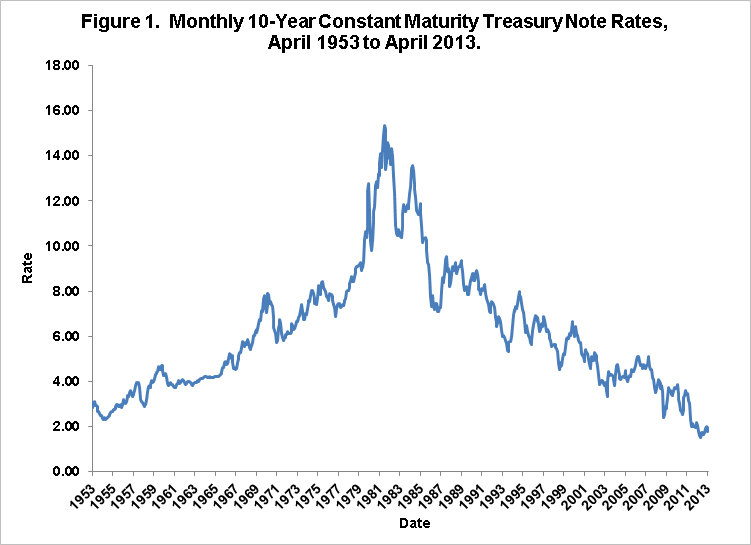 Since September 2011, rates have been below levels that occurred prior to September 2011. Currently, the 10-year rate is below two percent. Given these low rates, the period of generally decreasing rates since the early 1980s appears to have come to an end, as it is difficult to see how rates can decrease further. Moving forward, rates likely will either 1) remain stable at the current low levels or 2) begin an increasing period.

There is some historical support for a lengthy period of stable but low rates. In April 1953, the first month in which 10-year constant maturity rate data exists, the rate was 2.8 percent. Interest rates remained near three percent for an extended period. The rate was 2.97 percent in June 1958, the last time the 10-year rate was below three percent until 2008. There was roughly a five to six year period of stable interest rates in the 1950s, suggesting that a current period of low rates could exist for a relatively long time. Also note that a rise in the interest rate does not necessarily point to an increasing trend. Rises in interest rates can be followed by decreases in interest rates, and not signal a period of increasing rates.

Conversely, there is historical precedent for rapidly rising interest rates, with the most prominent period being the late 1970s and early 1980s. From August 1979 to September 1981, rates increased from 9.0 percent to 15.3 percent. During a one-year period from June 1980 to May 1981, rates increased by 4.3 percent. During this period, the Federal Reserve Bank (FED) tightened monetary policies so as to control inflation rates while also lowering unemployment rates.

Interest rates currently are at low levels, supporting higher farmland prices. While rates are low, there are historical examples of low rates persisting for a long time period. Hence, historical analysis does not suggest that low interest rates necessarily lead to rising interest rates in the near term.

Some are concerned about rapidly rising interest rates and the attendant impacts on farmland and other asset pricing. As occurred in the 1980s, tightening monetary policy could lead to rising interest rates. At this point, dramatic changes in FED policy do not appear to be occurring, suggesting that a rising rate environment will not occur due to FED action.