The U.S. corn industry experienced a significant “growth spurt” beginning in the 2007-08 marketing year that continued through the 2011-12 marketing year. That 5-year boom period was characterized by larger consumption, larger production, and higher prices; a combination that demonstrates the strong demand for U.S. corn beginning in 2007-08. The issue moving forward is whether or not demand for U.S. corn has peaked. The answer to the question has important implications for corn prices, farm incomes, land prices, and corn processing and handling industries. 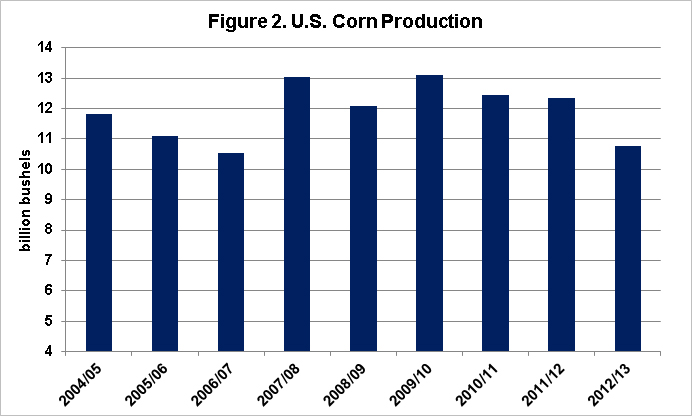 The consumption of corn to produce ethanol grew rapidly from 2004-05 through 2010-11 (Figure 4). Some of that growth stemmed from federal legislation that required minimum and increasing quantities of domestic biofuels consumption. Almost the entire non-advanced portion of those requirements has been met with corn-based ethanol. To date, most ethanol has been consumed in a 10 percent blend with conventional gasoline. As that 10 percent blend wall has now been reached, increased consumption will require consumption of higher ethanol blends–E15 or E85. If consumption of those blends increases enough to meet the entire non-advanced biofuels mandate of14.4 billion gallons in 2014 and 15 billion gallons in 2015 and beyond, corn consumption could grow to 5.14 billion bushels in 2014 and 5.36 billion bushels in 2015 and beyond, assuming zero net trade of ethanol. We recently concluded that consumption of those blends will likely increase slowly over the next two years. If that is the case, corn use for ethanol production may have peaked in the 2010-11 and 2011-12. Ethanol exports could provide a pathway to increased production, but that market will likely be limited by the availability of Brazilian ethanol. Feed and residual use of U.S. corn has gradually declined since 2007-08 (Figure 5). From a peak of over 6.1 billion bushels in 2004-05 and 2005-06, consumption declined to just over 4.5 billion bushels in 2011-12. The primary reason for the decline was the rapid substitution of distillers grain (a co-product of ethanol production) for whole corn in livestock feed rations. The number of livestock being fed in the U.S., as measured by the USDA’s estimate of grain consuming animal units, has been relatively constant since 2004-05 (Figure 6). The USDA projects little change in those numbers for 2013-14. The domestic market for meat and livestock products is mature. Slow population growth and stable per capita meat consumption suggests that feed consumption will also stabilize. Without growth in ethanol production and a resulting increase in production of distillers grain, corn feed consumption would be expected to also stabilize near recent levels. The potential for an increase in livestock production and a related increase in corn feeding probably lies with the potential for an increase in livestock exports. That potential is likely the highest for pork exports to China. Marketing year exports of U.S. corn from 2004-05 through 2010-11 ranged from 1.8 to 2.4 billion bushels per year, but were not trending higher or lower (Figure 7). However, exports declined to 1.543 billion bushels in 2011-12 and are projected at a 42-year low of 700 million bushels in 2012-13. Some of the recent decline in corn exports has been offset by larger exports of corn in processed form (ethanol, distillers grains, livestock), but that increase is captured in the other categories of corn use. The recent decline in exports of U.S. corn is likely associated with high corn prices that have stimulated production in the rest of the world and also allowed other exporters to sell at prices below the cost of U.S. corn. As indicated in Figure 8, foreign corn production increased from about 16 billion bushels in 2004-05 to 23 billion bushels in 2012-13 (an increase of 44 percent) and foreign exports grew from about 1.2 billion to near 3 billion bushels (an increase of 150 percent). The larger exports were mainly from Brazil and the Ukraine. Lower corn prices may slow the increase in foreign corn production and also allow U.S. corn to be more competitively priced. However, the production capacity that has been put in place in the rest of the world will likely persist, making it difficult for the U.S. to rebuild exports. Larger U.S. exports than are occurring this year are expected beginning in 2013-14, but returning to annual sales of two billion bushels will likely require more significant growth in foreign consumption than is now being projected. Similar to livestock export prospects, growth in U.S. corn exports may be dependent on Chinese demand. The recent period of growth in the U.S. corn industry appears to have peaked. The domestic ethanol market has hit the E10 blend wall and will be dependent on consumption of higher blends in order to expand total domestic consumption and to increase corn consumption. The domestic livestock industry is also mature and may require larger exports for production growth. Finally, the corn export market has become a lot more competitive in the past several years as high corn prices have stimulated an increase in world production. If the size of the U.S. corn market has peaked, a period of lower prices and reduced acreage may be required. Lower prices would be beneficial for the livestock industry, at least initially. Lower crop farm incomes might result in some downward pressure on farm land prices, particularly if interest rates continue to increase. Making plans for such an adjustment seems prudent, while at the same time hoping for a surprise development on the demand side.