As with most posts in this series, a benchmark average value is calculated for 1968-72 and 2001-05. These periods predate the 1970 and current period of farm prosperity, respectively. Five year averages are used to dampen the variability that can exist if a single year is used as a benchmark. Projected livestock production values are available for 2013, the 8th year after 2005. The 8th year after 1972 is 1980. There is no definitive way to decide when to start the period of prosperity or what period to use as a benchmark, but our choices are reasonable. While the current period of prosperity is still on-going, 8 years is long enough for an initial comparison. 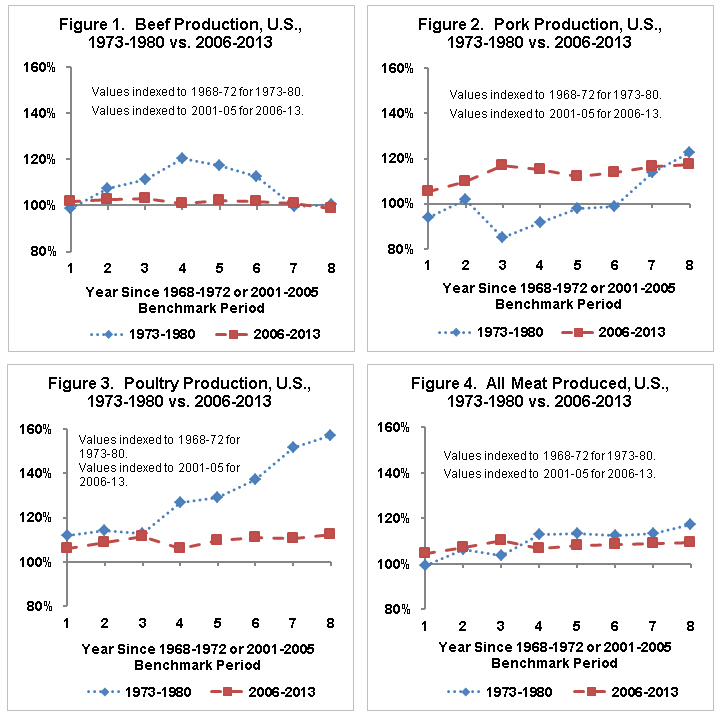 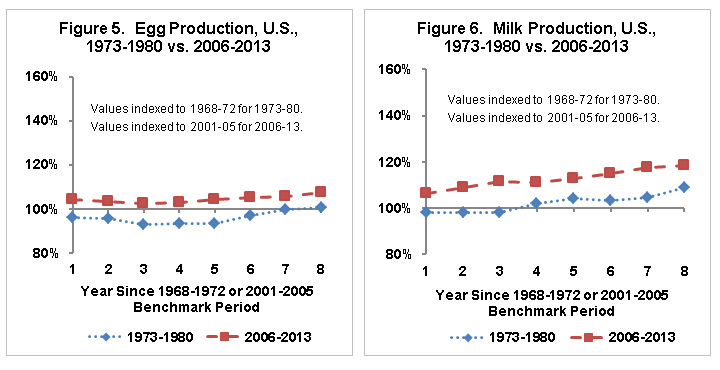 During the 1970 period of high crop prices, production of most meat and livestock products also increased. In particular, poultry production in 1980 was 57% higher than in 1968-72. The rapid growth in poultry production during the 1970s is commonly attributed to poultry’s efficient conversion of feed into meat relative to other animals and to the emergence of new technologies that notably reduced the cost of producing broilers at larger flock sizes. Reflecting the latter, average inventory of broilers and other meat type chickens per farm was 116,831 in the 1982 Census of Agriculture, compared with 19,566 in the 1969 Census. In summary, cost savings related to larger size swamped the impact of higher feed prices, causing broiler production to expand rapidly.

Cost economies of size continue to be a key factor in the U.S. livestock sector. USDA reports annually the cost of producing milk by number of cows per farm. Similar annual data are not available for other livestock. Nevertheless, examining milk production by herd size is instructive because, among the meat and livestock products examined in this article, milk production has increased the most since 2001-05 (+18%). Pork production is a close second at +17%.

As Figure 7 illustrates, return over cost for the 3 most recent years of data generally increases as the dairy herd increases in size. This holds true for all 3 measures of returns: milk price relative to feed cost, total return relative to operating cost, and total return relative to total cost. Herds of 1,000 or more cows are the most profitable, especially when measured on a total cost basis. They are the only herd size with a positive average return above total costs over 2010-12 (+7%). In comparison, average return above total costs for all dairy farms is -14%. Thus, while the average dairy farm was unprofitable over 2010-12, the average dairy farms with 1000 or more cows was profitable. This discussion implies that, despite high feed prices, milk production could increase if production on the largest dairy farms increased faster than milk production declined on the other dairy farms. 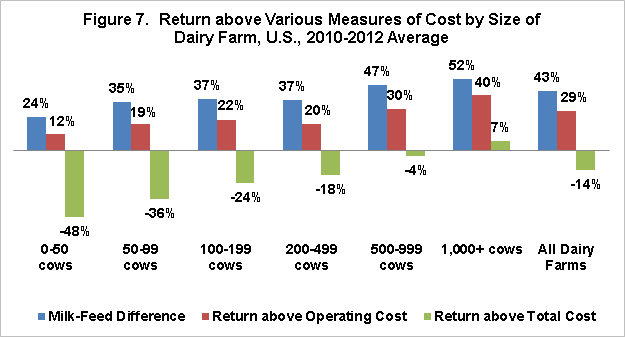 While not discussed in this article, it is important to point that U.S. per person consumption of all meat measured at the retail level has declined during the current period of farm prosperity: from 219.5 pound per person during 2001-05 to a projected 204.8 pound per person in 2013. This decline in domestic consumption has been more than offset by an increase in U.S. exports of meat. The same set of observations applies to eggs. For milk, both exports and per capita U.S. consumption have increased since 2001-05. Thus, part of the more complete story about the U.S. livestock sector during the current period of farm prosperity is its shift to a more export orientation.

In the next post in this series, we will examine the growth in demand in China.