The publication entitled “Revenue and Costs for Corn, Soybeans, Wheat, and Double-Crop Soybeans” has been revised and is available here. Revisions from the last publication includes an update of 2012 results and an updated to projections for 2013.

This publication gives results for northern, central, and southern Illinois. Central Illinois is further divided into categories for high-productivity and low-productivity farmland. Per acre revenue and costs are shown for corn and soybeans in all regions. Wheat and double-crop soybean results also are reported for southern Illinois. 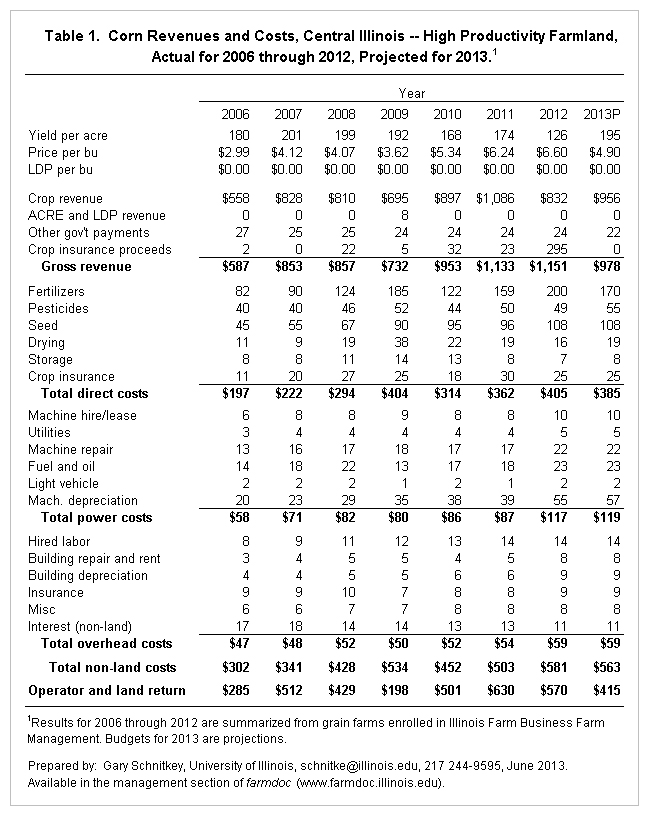 Table 1 shows one of the tables from the publication, showing revenue and costs for corn grown in central Illinois on high-productivity farmland. Results from 2006 through 2012 are summarized using data from farms enrolled in Illinois Farm Business Farm Management (FBFM). FBFM is a farm record-keeping and financial consulting service operated in Illinois. Farms enrolled in FBFM account for 25% of the acres farmed in Illinois. Also shown are projections for 2013, which modify 2012 items based on changes in commodity and input prices between 2012 and 2013.

Notable results for 2012 include:

Also included are projections for 2013. Revenue projections are made using an expected yield of 195 bushels for corn grown on high productivity farmland in central Illinois. A corn price of $4.90 is used in projections. The $4.90 projected price is above the $4.70 midpoint of WASDE projected prices, but is below current bids for harvest-time delivery. The $4.90 price presumes a normal crop which would lead to a reduction in corn prices.

Non-land costs are projected at $563 per acre, down from the 2012 level of $581 per acre. This projection assumes reductions in fertilizer costs.

In this case, operator and farmland return is $415 per acre, down from levels in the last three years. The $415 return is a return before paying for farmland, which would equals cash rent for farmland that is cash rented. Cash rents vary considerably, but a $300 per acre cash rent occurs with some frequency. At a $300 cash rent, returns to the farmer would be $115 per acre.