Concentration of corn and soybean production in the U.S. is examined in this article. As is well known, corn and soybeans production is concentrated in the Corn-belt, with significant amounts of production occurring in the upper Midwest, parts of the Great Plains, and down the Mississippi River.

Concentration is examined for both corn and soybeans. The following describes methods for corn. The same procedures were used for soybeans.

Total corn production by county came from the National Agricultural Statistical Service (NASS) for 2010, 2011, and 2012. These three years were averaged to arrive at average production for each county in the U.S. 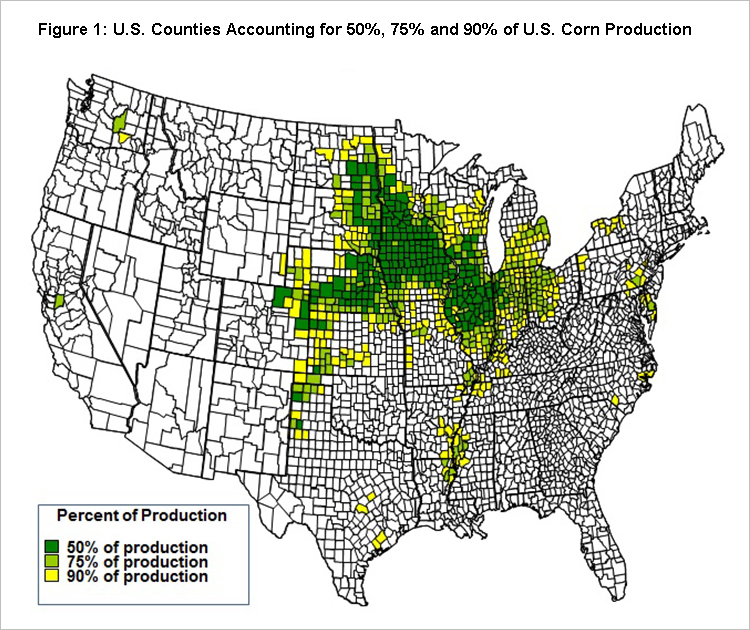 The above procedure results in the lowest number of counties that account for the specified level of U.S. total production. It does not attempt to control for size of county. The above procedure may have a bias for counties with more acres. A procedure holding acreage constant could result in a different map to the one shown in Figure 1. However, large differences from that shown in Figure 1 are not likely.

Adding the next 297 largest counties in terms of production yields 90% of total production. Most of these counties still are in the Corn-belt. Additional states not listed above with counties contributing to 90% of total U.S. production include North Carolina and New York.

As one would expect, most of the U.S. corn is produced in and on the periphery of the Corn-belt. Other area contributing sizable amounts to total production include the western Great Plains (western Nebraska, western Kansas, eastern Colorado and the panhandles of Oklahoma and Texas) and the Mississippi River Delta (Mississippi, Louisiana, and Arkansas).

The soybean production region has similarities to corn (see Figure 2). Most of U.S. production can be accounted for beginning in the upper Midwest (North Dakota and Minnesota), coming through the Corn-belt and periphery states (South Dakota, Wisconsin, Iowa, Missouri, Illinois, Indiana, Michigan, and Ohio), and down the Mississippi River (Missouri, Kentucky, Arkansas, Tennessee, Mississippi, and Louisiana). Compared to corn, more soybean production occurs around the Mississippi River and less in the western Great Plains. 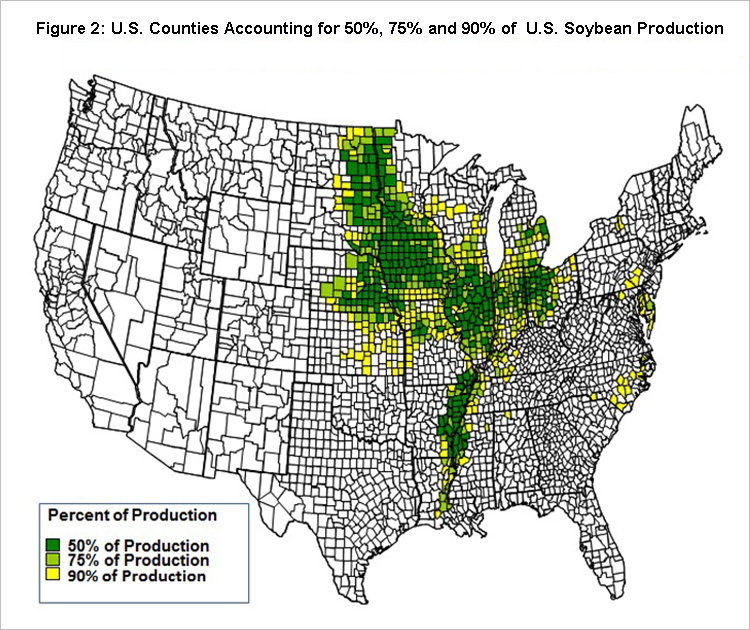 Both corn and soybean production is relatively concentrated in the Corn-belt, upper Midwest, parts of the Great Plains and the Mississippi River Region. In some senses, the relatively small region that accounts for most of the production may be surprising. Obviously, production changes in these regions will have large impacts on total U.S. production.