Data from Illinois grain farms were used to evaluate how ownership and tenure percentages have changed over time. Between 2011 and 2012, there has been a shift away from share rental arrangements. Percent of farmland owned increased in northern and southern Illinois.

Data from the Illinois Farm Business Farm Management (FBFM) Association was used to calculate the percent of land owned, share rented, and cash rented by Illinois grain farms. Table 1 reports results for farms that received the majority of their farming income from grain operations and operated at least 260 acres. Livestock and smaller grain farms likely would own a higher percentage of farmland than shown in Table 1. 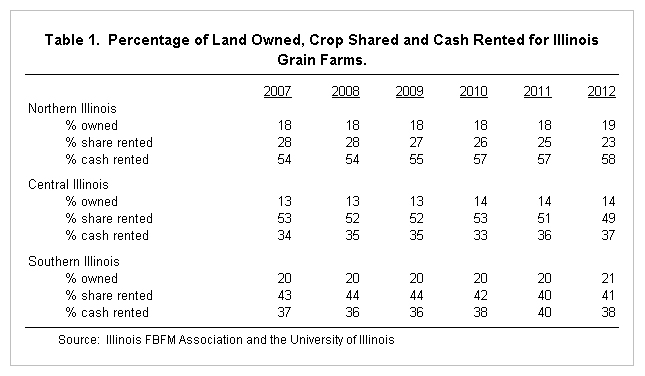 Over several decades, there has been a movement away from share rent towards cash rent. There was a larger than usual switch away from share rent arrangement between 2011 and 2012. Percent of farmland owned increased between 2011 and 2012 in northern and southern Illinois. It will be interesting to see how percentages change in future years as prices likely return closer to long-run levels.