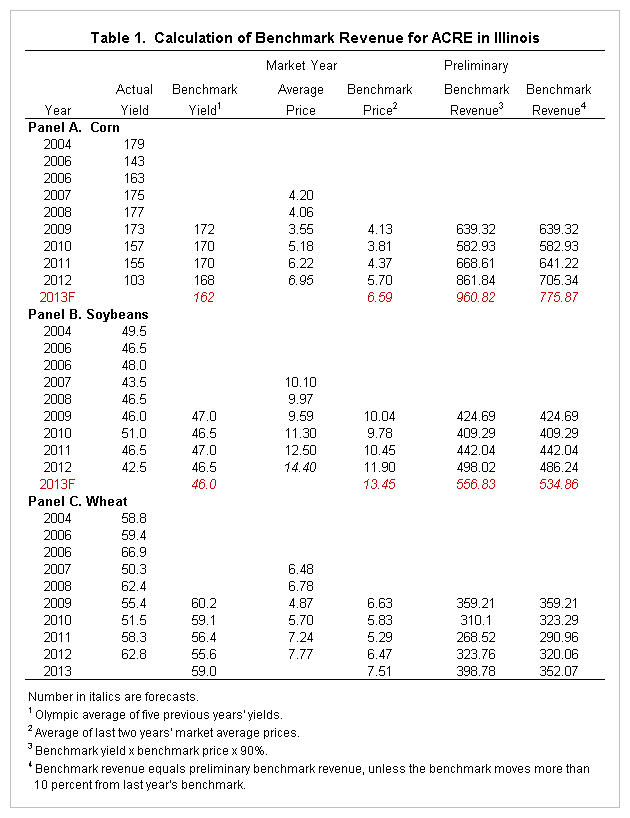 With near certainty, 2013 benchmark revenues will be capped at the upward movement of 10 percent for corn, soybeans, and wheat in Illinois. Therefore, even though the 2012 market years for corn and soybeans have not come to an end, the 2013 benchmark revenues can be calculated with near certainty as a 10 percent increase from last years’ benchmarks. For this not to be the case, the 2012 MYA corn price would have to be below $3.87 per bushel and the soybean price below $11.35 per bushel. With the market year ending in August, it is extremely unlikely that prices below these levels will occur. State benchmark revenues for 2013 will be $775.87 per acre for corn, $534.86 per acre for soybeans, and $352.07 per acre for wheat.

For corn, state ACRE payments will occur if state revenue is below $705.34 per acre. The 2012 actual corn yield is 103 bushel per acre, meaning that MYA price will have to be below $6.84 per bushel before ACRE pays. Current WASDE estimates place the midpoint of the estimate of 2012 price at $6.95 per bushel. ACRE payments for corn are unlikely in 2012.

ACRE payments for 2013 are more speculative, as the 2013 marketing year has not begun for corn and soybeans and there remains considerable uncertainty as to the levels of 2013 corn and soybean yields.

For corn, ACRE payments will occur when state revenue is below $775.87. If Illinois corn yields average 162 bushels – the Olympic average for the previous five-years – the 2013 MYA price would have to be below $4.79 for an ACRE payment occurs. For a 170 bushel yield – close to an average Illinois corn yield – the MYA price would have to average price $4.56. Prices below these levels are possible. A simulation model in the Acre Payment Estimator – a FAST Microsoft Excel spreadsheet available for download from the farmdoc website – indicates that there is a 44 percent chance of an ACRE payment in 2013. The average ACRE payment times .85 is $31 per acre.

For wheat, the National Agricultural Statistical Service reports the 2013 Illinois wheat yield calculated on a planted acre basis as 63 bushels per acre. At a 63 bushels yield, MYA price would have to be below $5.42 per bushel. WASDE indicates that range of the 2013 price to be $6.45 to $7.75. Given this range, it is unlikely that wheat payments will occur for ACRE.

In Illinois, ACRE payments for the 2012 crop year are unlikely. There is a reasonable chance for corn and soybean payments in the 2013 year. If 2013 payments occur, they will be paid after October, 2014.