Distillers’ grain solubles (DGS) are a co-product of ethanol production from corn and have become an important feed source for the domestic livestock industry in the U.S. While it is widely known that the price of DGS is related to the price of corn, the exact nature of this relationship and how DGS pricing is related to other factors is far less understood. The purpose of this post is to shed some light on DGS pricing given the important role this product now plays in feed markets.

DGS are sold as dry, modified wet, and wet DGS, with dry (DDGS) being the most common. The yield of DGS per bushel of corn varies among ethanol plants and by form of the co-product. The 2012 Biofuels Benchmarking Industry Report by Christianson and Associates, LLP indicates that the industry average distillers equivalent yield (average yield of all forms of DGS adjusted for moisture content) has remained constant near 16 pounds per bushel of corn for several years. Using that estimate as a guide, production of DGS increased from about 7.6 million tons in 2002-03 to about 40 million tons in the 2010-11 and 2011-12 corn marketing years. Some of the DGS are exported, but consumption in the domestic livestock feed market has likely approached 30 million tons per year. Consumption of grains and soybean meal in domestic livestock feeding is near 180 million tons per year, so that DGS now account for a sizable share of domestic livestock feed and accounts for much of the decline in feeding of whole corn since 2007-08.

The price of distillers DGS should be closely aligned with the price of corn, with the difference in prices of the two products reflecting differing nutrient content. The average price of distillers’ dried grains (DDGS) and the average price of corn (both in dollars per ton) quoted by the USDA’s Agricultural Marketing Service for Iowa ethanol plants each Friday from January 26, 2007 through July 5, 2013 is shown in Figure 1. As expected, the prices of those two products have generally moved together, but the magnitude of the price differences have clearly varied. That variation is highlighted in Figure 2. Since January 2007, the price of DDGs at Iowa ethanol plants averaged 89 percent of the price of corn, but that ratio varied from less than 70 percent to nearly 110 percent. The prices of DDGS are clearly influenced by factors other than corn prices. 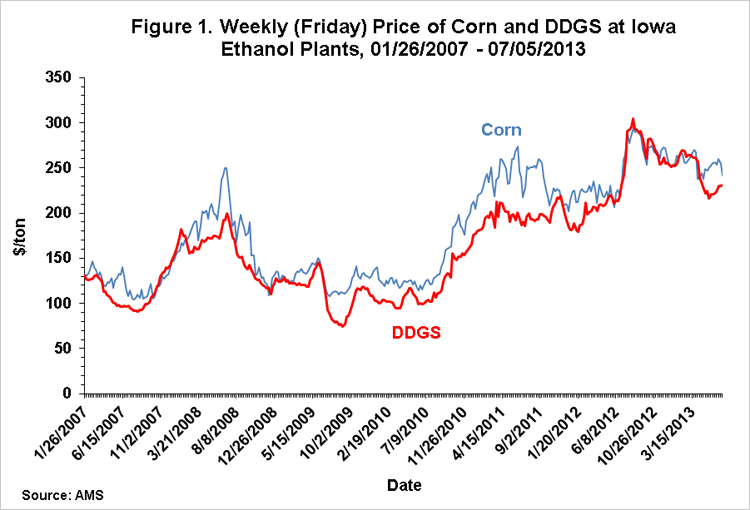 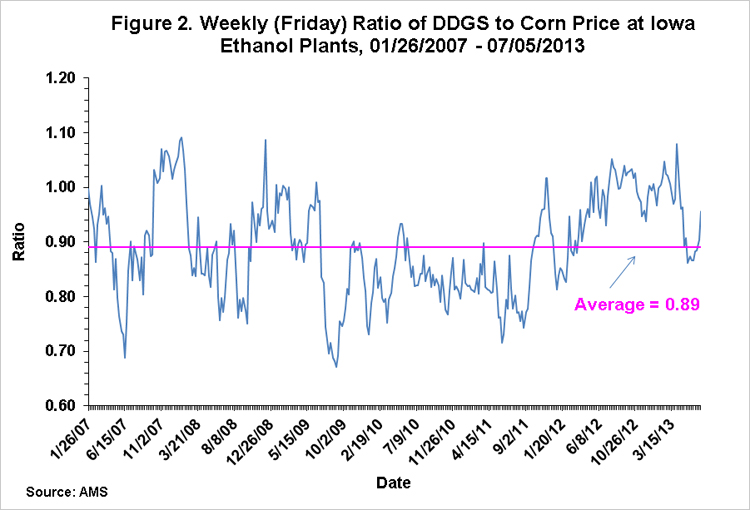 Since DDGS have a different nutrient content than whole corn, prices might also be influenced by the prices of other feeds. Figure 3 shows the history of DDGS prices at Iowa ethanol plants and soybean meal prices at Iowa processing plants since January 2007. There has been some similarity in the price patterns of the two products, with DDGS priced at a fairly large discount to soybean meal, suggesting that the price of soybean meal might help explain some of the variation in the differences between DDGS and corn prices. 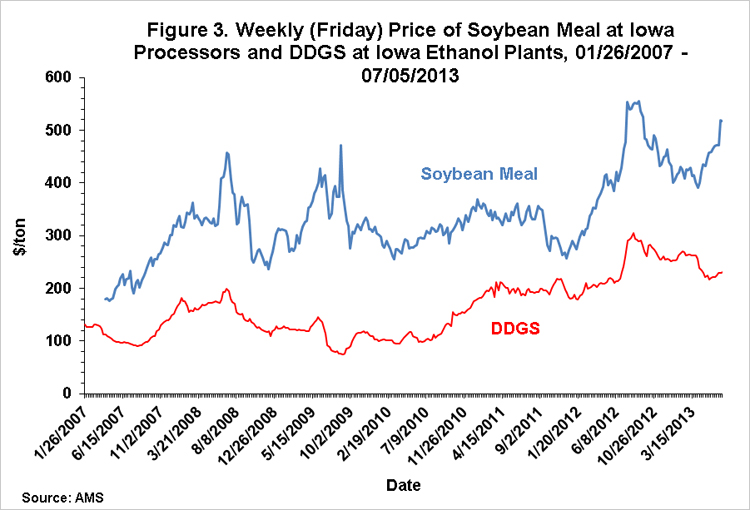 Distillers’ grain solubles (DGS) are an important feed source today and will likely remain so for the foreseeable future. We show that dried solubles (DDGS) prices are primarily explained by corn and soybean meal prices, reflecting the value of energy and protein content of the DDGS. Not surprisingly, our simple model still leaves substantial variation in DDGS prices to be explained. For example, DDGS prices were high relative to both corn and soybean meal for much of the last year-and-a-half. With the ongoing development of export markets for DGS, considerable efforts to optimize DGS in feed rations, and the rapid increase in corn oil extraction from DGS, the pricing of DGS will remain a very interesting topic.