The recent upswing in U.S. farmland prices is well-documented, with recent posts describing the USDA’s estimate of annual valuation change, and comparisons to other asset classes. The other key dimension of farmland sales, the amount of farmland transferred, is less frequently evaluated. This post discusses temporal and regional trends in parcel size of Illinois farmland sales from 1979 to 2011 using Illinois Department of Revenue (IDOR) farmland transfer data. To ensure the most representative collection of IDOR data, only arms-length sales of unimproved farmland classified as a farm or an empty lot were analyzed. Furthermore, only transfers between 10 acres and 1280 acres in size and between $100 and $20,000 in per-acre price were included in the data used in this analysis. These screens do limit a few potential outliers, but help provide a more realistic view of “typical” sales. 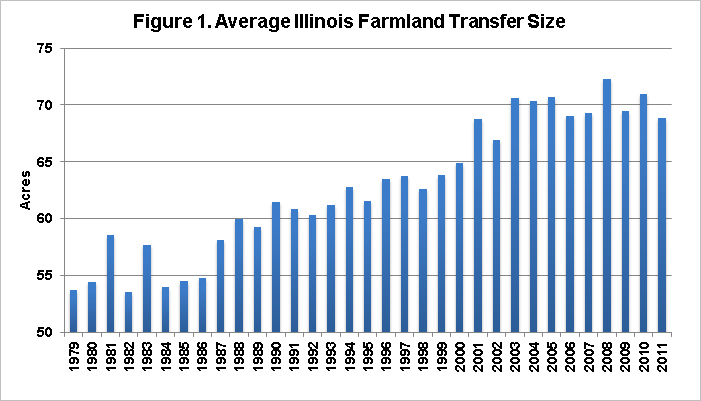 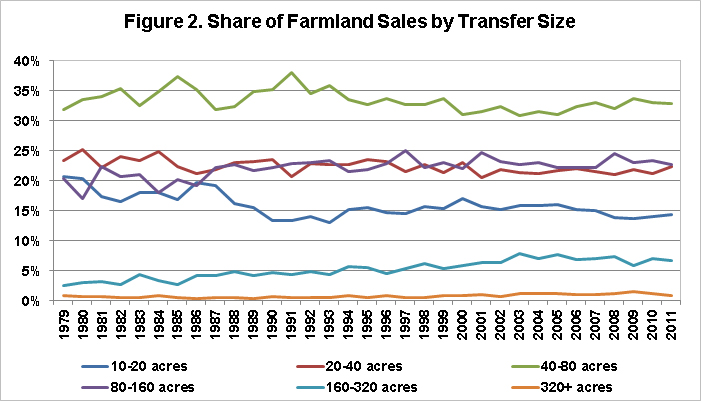 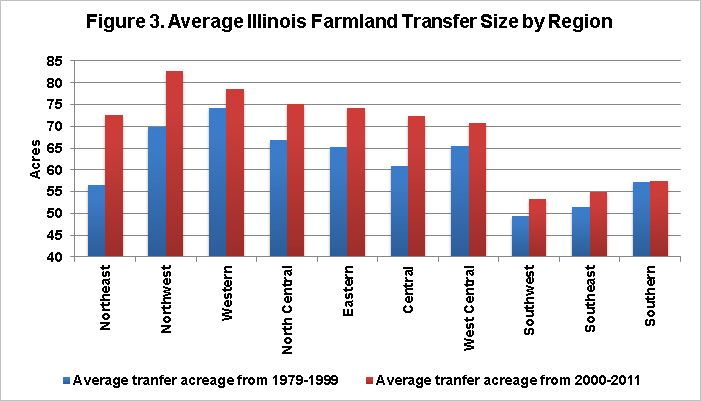 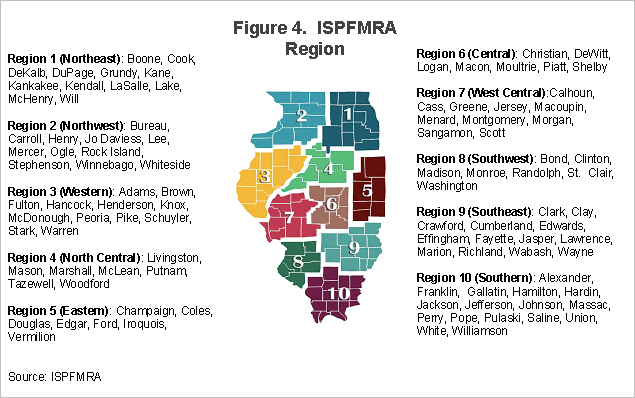 Importantly, parcel size has been shown to have an important relationship to farmland sale price as well. While smallest parcel farmland transfers tend to sell at greater per-acre prices than their larger counterparts, it is unclear if due to potential conversion of use potential, or reduced financial constraints that accompany small farmland parcels.

Figure 5 illustrates how Illinois farmland prices have evolved across several transfer size categories. As expected, Figure 5 shows that prices for the smallest farmland transfers (10 to 20 acres) are almost invariably the highest while prices for very large farmland transfers (320 to 640 acres) are typically the lowest. In many years, a substantial premium exists for 10 to 20 acre sales while price for other transfer size categories are clumped together relatively closely. On average, from 1979 to 2011, per-acre prices for 10 to 20 acre sales are 28.4 percent higher than those of larger parcels. Continuing up the scale, 40 to 80 acre parcels sold for only 4.4 percent more than 80 to 160 acre parcels, which in turn sold for just 6.3 percent more than 160 to 320 acre parcels. These observations are of course dependent on the characteristics that led to parcels being brought to market as well, so should not be confused as causal. 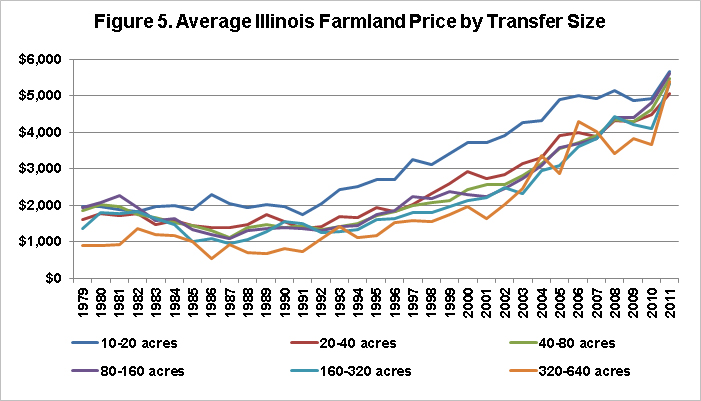 The size-price relationship for farmland transfers varies considerable by region as well, and with proximity to population in particular. In the northeast and southwest regions of Illinois (nearer Chicago and St. Louis, respectively), 10 to 20 acre parcels sell for nearly 50 percent more than other sales. Much smaller premiums exist in more rural regions where farmland buyers face less competition from buyers outside of agriculture. Across all regions, premiums for small parcels have declined in recent years as nonagricultural demand for farmland receded with the macroeconomy. Indeed, from 2007 (the year when nonagricultural demand for farmland began dropping acutely) and 2011, 10 to 20 acre parcels sold for an average of 11.8 percent more than larger parcels, far less thatn the 36% premium during the ten years prior to 2007.

The temporal and regional variation in Illinois farmland transfer sizes is in many cases a logical result of agricultural and farmland market differences within the state. Although the farmland transfer size trends discussed above are not particularly revolutionary, they are fundamentally important to understanding the past and present of the Illinois farmland market. Additional posts using the IDOR data set will continue to examine price trends and relate sales to agricultural income variation as well.