Each crop year, market information accumulates throughout the planting and growing season that affects price levels and expectations about future price levels. Some of the important elements and events in forming expectations include the establishment of the “projected prices” used in crop insurance contracts and claims, weather events during planting, germination, and late season kernel and pod filling intervals, and the regularly released projections by USDA and others for acreage and yield, and for demand and supply aggregates. It is generally regarded that futures markets provide the best aggregated beliefs about future prices by market participants, given all currently available information; and that changes in information or resolution of uncertainty are reflected in changing prices. As we approach harvest and a final determination of yields, the information generally becomes better understood and the possible range of prices shrinks toward the final futures prices as well. In turn, the prices of options on futures reflect the degree of uncertainty about the futures prices and provide a means to recover additional probabilistic information about price uncertainty, or the probability of prices moving to various other levels, either higher or lower than the current futures price prior to expiration.

Each year, RMA establishes Projected Prices for corn (soybeans) by averaging December (November) futures prices during the month of February. The Projected Prices serve as the minimum indemnification prices for most of the insurance contracts sold and thus are essential reference prices for planning revenue. Unlike 2012 during which time corn and soybean futures rose dramatically through the summer as prospects for reductions in yield materialized with the drought, 2013 has witnessed generally declining corn prices since the establishment of the projected prices, and normal variation for soybeans with a recent upturn related to concern about moisture late in the season.

Figures 1 and 2 display corn and soybean price patterns from January 1 to August 23, 2013 along with a visual “window” on the averaging interval for establishment of the Projected Prices. As can be seen, the current prices are substantially lower than the original projected price for corn and are slightly above for soybeans. In addition to tracking the price evolution through time, it is also interesting to depict the evolving uncertainty around prices – or the market’s expectation of the likelihood for different sized price movements prior to expiration. 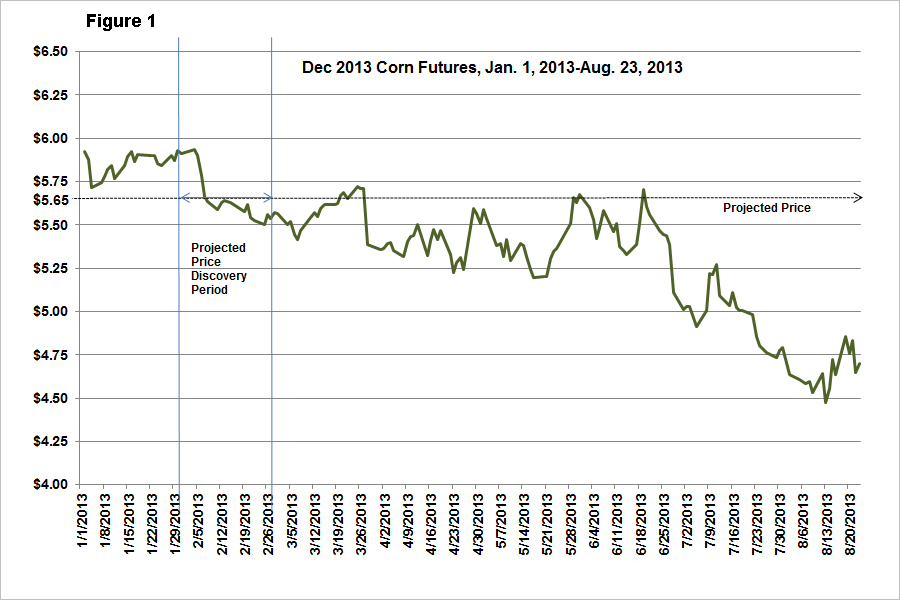 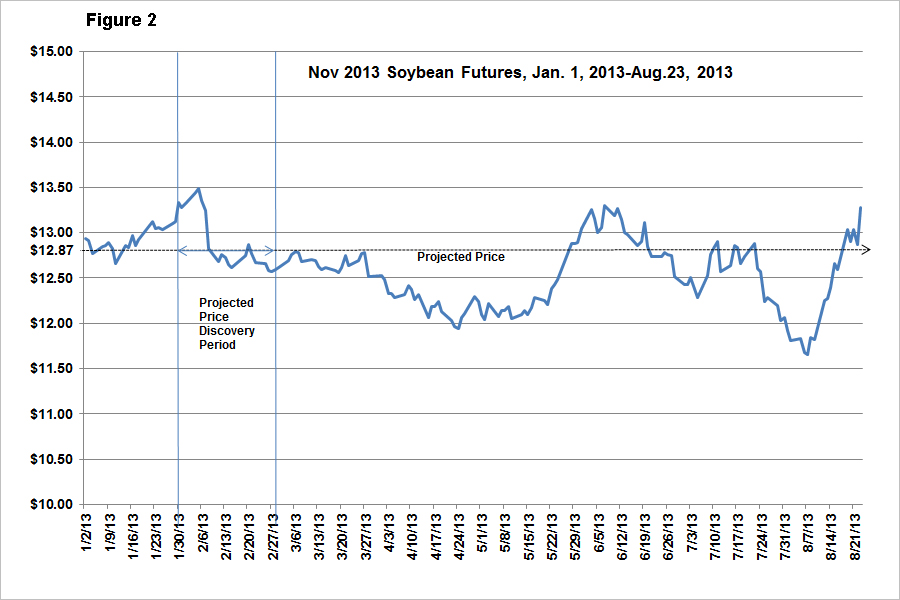 In what follows, a set of related views of the history of prices and the confidence around the market expectations of future prices is provided, taking advantage of the information that is provided through market prices of options as well. To recover probabilistic information from options markets, a technique is used that identifies a best fitting distribution given observed prices of both puts and calls across the set of actively traded strike prices. The specific approach used is somewhat akin to using the popular Black-Scholes option pricing model, but solving it “backwards” across all options simultaneously.

Figures 3 and 4 provides more complete information about the market’s assessment of possible prices using market data from March 1 when Projected Prices were first known and market information from August 28, 2013 reflecting the current information set of market participants. The upper panel shows the probability images associated with the markets assessment of possible futures prices by the expiration of options, and the lower panel shows the same information in cumulative probability form under which one can more directly identify the implied probability associated with each price of interest and vice versa. In both cases, the information has resulted in a “collapsing” of the probability distribution from March to present with the visual effect of the range of possible outcomes shrinking substantially and the relative probability of prices near the current price increasing or becoming more “peaked”. In the case of corn, the center of the distribution has also begun to shift to the left and lower prices, while soybeans have shifted slightly upward. 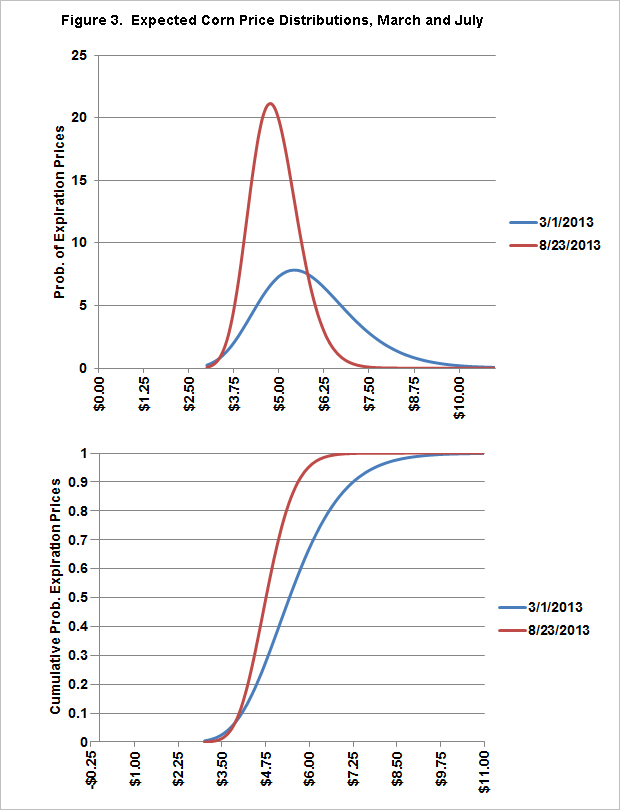 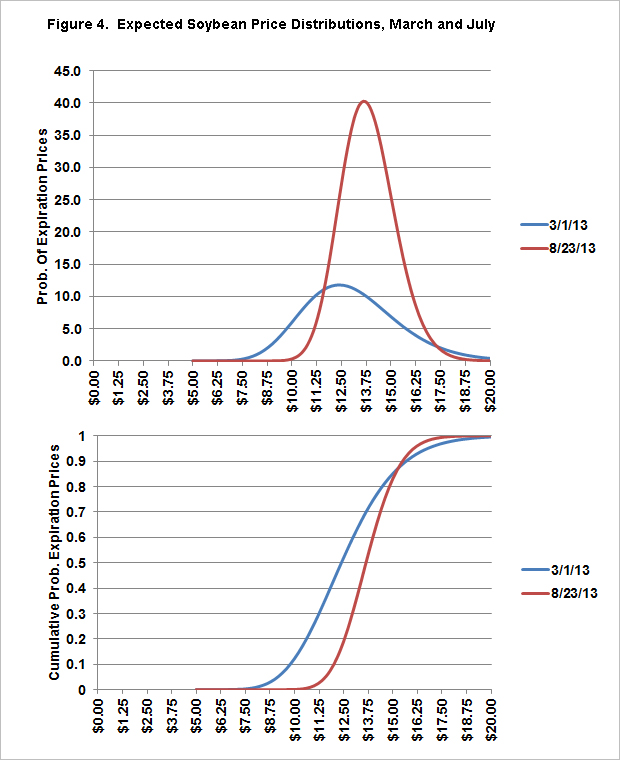 In the tables below, a few comparisons are made between the information in the market’s expectations between March 1, and current (August 28, 2013). The tables are organized with two panels. The left side shows a set of prices with the associated probability the market assigned to that level as of each date. For example, in March, the market viewed there to be a 58% chance that expiration prices would be below Projected Price in corn, but by August, that had increased to 90% as the market is settling in on its expectations of a larger crop and associated lower prices. For soybeans, the opposite effect is evident as concern about a soybean yield stress accumulates. The right hand panel of each table shows the same information but organized across probability levels. Highlighted are the interquartile cutoffs of 25% and 75%. As shown in the table, in both cases the range has declined, but corn has fallen substantially while the main effect in soybeans has been to reduce the downside risk. 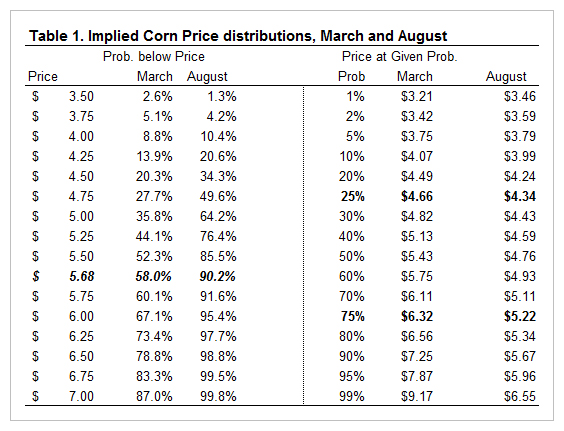 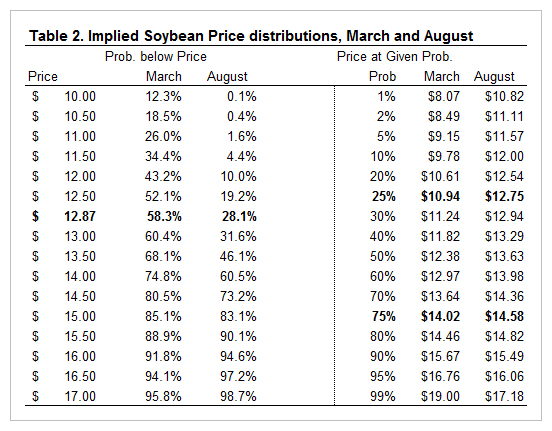 Figures 5 and 6 summarize similar information through time by repeating this process for each trade date and graphing selected percentile levels through time which can be interpreted as the market’s estimate of the value at which there is the associated percentile chance of being below by expiration. It is interesting to note the collapsing of each distribution through time, but also to note selected “shocks” showing up in each market as “jumps” and shifts in the price percentiles estimated. Additionally, the interquartile range is provided, or the distance between the 25th and 75th percentile prices is plotted on the right scale. It is generally the case that the interquartile range tends to decline through time as uncertainty is resolved during the growing season. Likewise, the high and low “bands” in the price distribution tend to narrow toward the median or 50th percentile, even if the levels change through time. 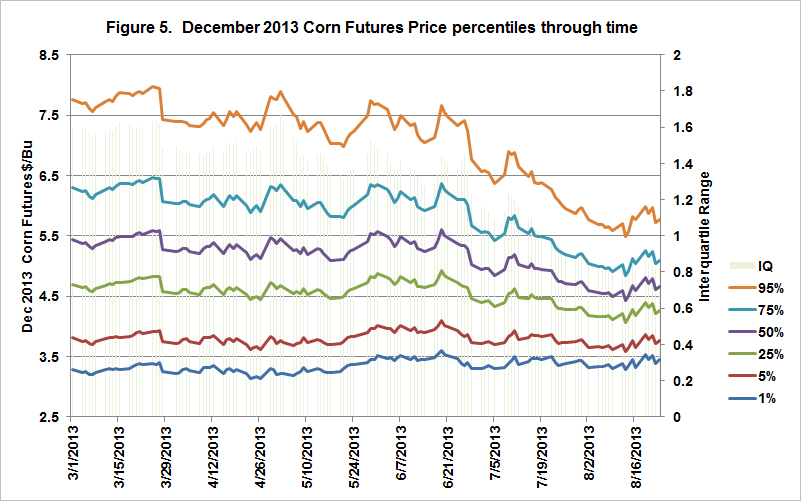 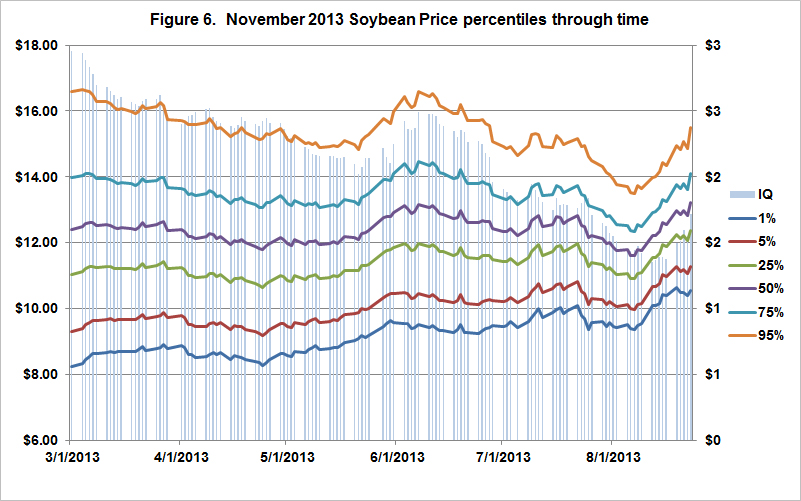 Market prices will continue to evolve as uncertainty is resolved about final production and demand. Information will continue to arrive in the market that will help refine and further collapse the range over which final prices are likely. Nonetheless, it is interesting to show the market’s beliefs every now and then and consider what the market believes lies ahead, and compare those measures to recent history.

Note: The views expressed herein are solely the author’s opinions and do not necessarily reflect those of others or entities with whom professionally affiliated. All errors and omissions are the author’s alone.