Figure 1 shows a map of average cash rents by county (a table of cash rents is available here on the farmdoc website). As can be seen, there is considerable range in cash rents across Illinois. The county with the lowest cash rent is Johnson County, having a cash rent of $69 per acre. DeWitt county has the highest cash rent of $385 per acre. 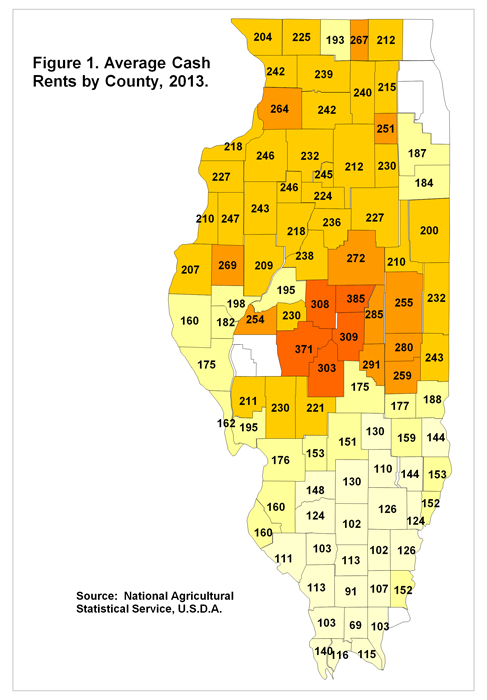 Much of the variability in cash rents across counties is explained by farmland productivity. To mathematically state this relationship, 2013 trend corn yields were calculated for each county in Illinois using county-level yields reported by NASS for the years from 1975 through 2012. These trend yields represent the expected corn yield in 2013 given normal weather conditions. Average cash rents then were plotted against expected corn yields, as illustrated in Figure 2. 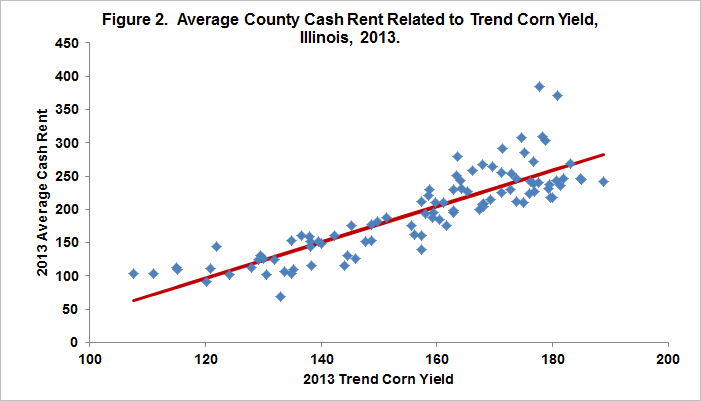 As can be seen in Figure 2, average county cash rents increase with higher 2013 trend yields. The red line in Figure 2 shows a linear line through the data. Linear regression was use to place this line through the data points. This line was fit with data from 100 bushel per acre up to 200 bushels per acre. The equation relating 2013 expected corn yields to average cash rents is: 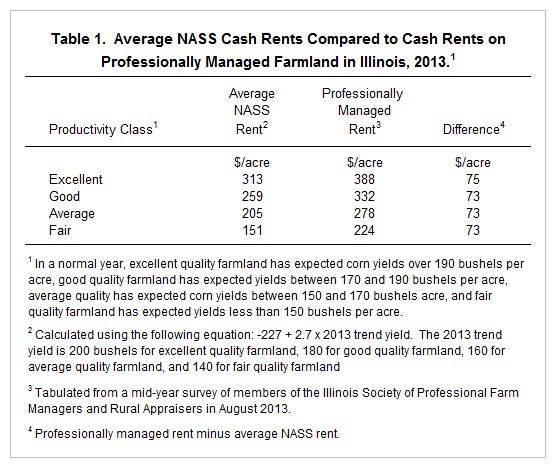 To offset higher rents on professionally managed farmland, there are also rents below the NASS average as well. There are many cash rents that are $70 or more below the average. Various reasons can be given for these differences. Many non-market factor and relationship issue likely play a role in below average cash rents. Some of this difference likely is due to slowness in adjusting cash rents up to reflect higher returns in recent years.

The 2014 cash rent negotiating season will begin soon in earnest. The outlook for 2014 agricultural returns is lower compared to the outlook last fall when many of the 2013 cash rents were set. Given current 2014 return projections, cash rents above NASS averages will result in negative returns for many farmers.
Lower projected agricultural returns likely will put downward pressure on cash rents that are above the NASS average. The Illinois Society reports that 2014 expected cash rents are below 2013 levels Appraisers (see here for more detail). However, the process of lowering cash rents likely will be “sticky”, resulting in slow downward movement in above-average rents.