The Illinois Society is a professional organization whose members manage farms, appraise farmland and other agricultural property, and broker farm real estate. Society members are knowledgeable about the farmland and cash rental markets. More information on the Illinois Society and its members can be found on its website (www.ispfmra.org). The Society publishes a yearly summary of land values and conducts a mid-year survey. A summary of this year’s mid-year survey is available here. A summary of Society members’ 2014 cash rental expectations is given here. 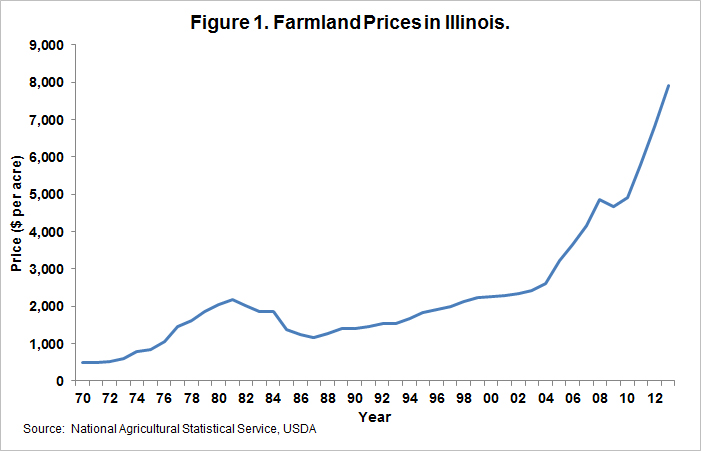 Expected Farmland Price in the Next Twelve Months

Of the respondents expecting decline farmland prices, most expect declines between 1 and 5 percent. Compared to the recent large increases in price over the past several years, most respondents expect a relatively small increase over the next twelve months.

Farmland Price Increases Over the Next Five Years

Society members were asked their expectations of farmland price increases over the next five-years. A response of 4% means that the respondent expected an average increase of 4% in each of the next five years. Responses are

Given large recent increases in farmland price in recent years, some concern exists that farmland price may decline dramatically similar to the decline that occurred during the 1980s. Respondents were asked what the chances were of a 1980s style decrease in farmland prices over the five years. Responses are:

Overall, most respondents do not believe the chances are high of a 1980s price decline.

As compared to increases in the last five years, Illinois Society members are expecting more stable farmland prices over the next twelve months and five years. Overall, most respondents do not foresee a large decrease in farmland prices.

Responses are consistent with more slowly growing land prices. The large increases since 2006 likely are not a normal occurrences. Increases nearer historical averages are more likely.