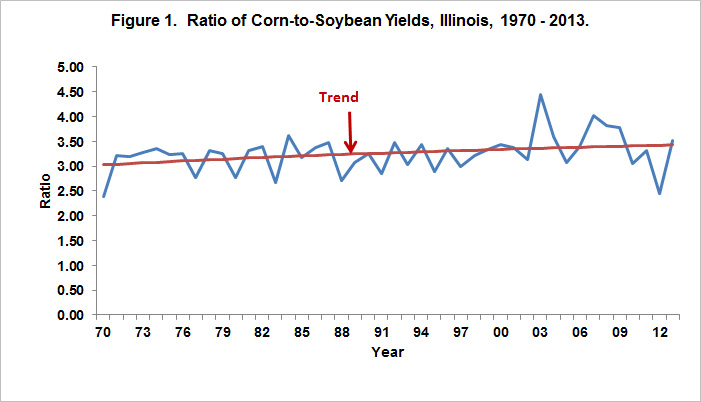 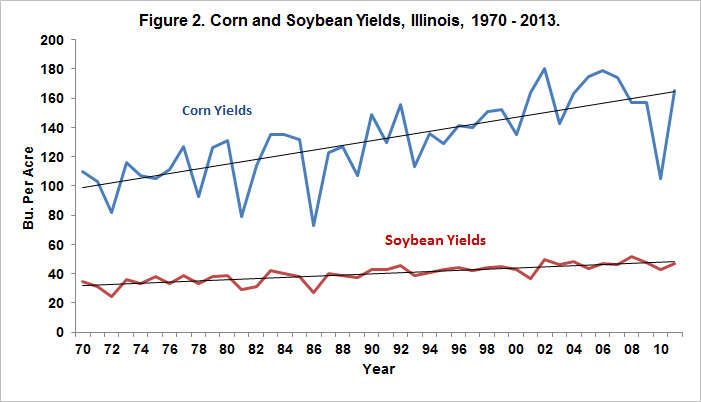 In recent years, acreage shifts between corn and soybeans were correlated with changes in corn-to-soybean yield ratios. In the 2000s, corn acres increased in Illinois while soybean acres decreased. In more recent years, corn acres decreased while soybean acres increased. Some of this movement can be contributed to expectations on relative corn and soybean yields.

A belief in relative stable increases in yields leads to one answer. This belief would indicate that the trend lines in Figures 1 and 2 are relative stable and will continue in the future. This implies that the relative low corn yields in 2010 through 2012 were caused by random events similar to those during the late 1980s and early 1990s. A period of above average yields will follow sometime in the future. Predicting when that may be is difficult and error prone.

The low yield ratios from 2010 through 2012 likely understate relative differences between corn and soybean yields. An expectation of a yield ratio between 3.40 and 3.45 seems reasonable for the state of Illinois. Relative yield ratios will vary across the state and across farms, with northern and central Illinois having higher ratios. Hence, farms should adjust expectations based on location and farm results. Realizations of relative yields will impact the relative profitably of corn and soybeans