The hardships experienced across the dairy sector in 2009, where U.S. dairy farmers rapidly liquidated more than 250,000 dairy cows from the national herd (Figure 1), brought about a consensus among dairy industry participants that a new risk management solution was needed. As an alternative to price and revenue support several new safety net programs with an emphasis on government sponsored income-over-feed-cost (IOFC) margin insurance have been proposed. Dairy subtitles in both House and Senate 2013 Farm bills discontinue MILC and DPPSP programs and institute a Dairy Producer Margin Protection Program (DPMPP). The DPMPP is a highly subsidized IOFC margin insurance program designed to pay an indemnity to a participating farm when the difference between the national average all-milk price and the formula-derived estimate of feed costs falls below a farmer-selected margin trigger. The House bill (Dairy Freedom Act) includes only the DPMPP. If enacted into law, the Senate bill (Dairy Security Act) would require farms enrolling in DPMPP to also participate in a Dairy Market Stabilization Program (DMSP). The DMSP is a supply management-type program designed to enhance milk prices by reducing the rate of growth in U.S. milk production when IOFC margins fall below a specified threshold. Farms must either reduce the quantity of milk sent to market or face milk revenue penalties on milk shipped over their assigned production base. 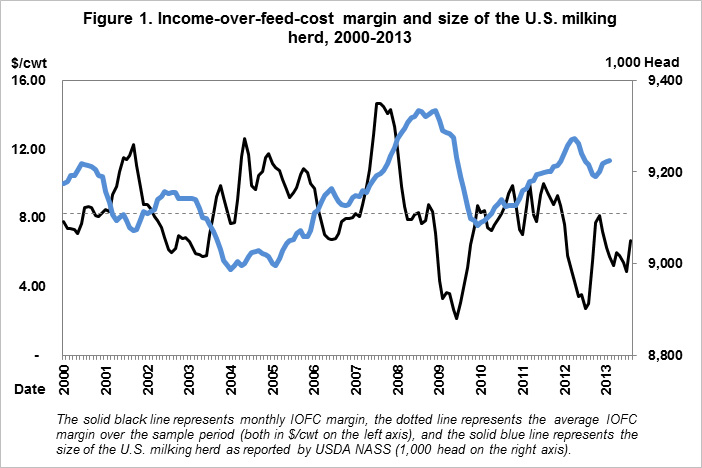 During times of low margins, it is in the collective interest of dairy producers to reduce production to boost margins quickly to sustainable levels. However, even in absence of coordinated collective action, periods of low margins are generally a temporary phenomenon. Through herd liquidations, milk supply naturally adjusts to return margins to average levels, as evidenced by historic IOFC margin patterns and the term structure of forward IOFC margins (Bozic et al. 2012). The downside of relying exclusively on markets to govern the supply correction is that the recovery may be delayed for as long as revenue from milk production covers at least variable costs. Thus, to expedite IOFC recovery Dairy Security Act couples DPMPP with a supply management-type program.

Additionally, supporters of Dairy Security Act argue that a highly subsidized stand-alone margin insurance program offering coverage only $0.30 per cwt less than the historical average of $8.30 per cwt will make the milk supply less responsive to negative price signals, and in the long run result in lower average milk prices and higher indemnity payments from the taxpayer to the dairy farmer. Such a scenario may be undesired, but would not be unforeseen.

The DMSP portion of the DSA package has wide-spread support within the dairy farming community and its cooperative leadership, but this support is not nearly unanimous. Significant resistance with regard to the DMSP has been registered by dairy cooperatives, restaurant and food marketers, consumer groups, dairy food manufacturers, and their trade associations. These groups are concerned that artificial enhancement of milk prices through DMSP milk supply reductions will have detrimental effects on procurement costs, throughput efficiency, retail prices, consumer demand, and dairy export opportunities.

In addition, opponents fear that once DMSP becomes part of legislation it could be easily amended by Congress to be non-voluntary or more severe in the financial penalties, a slippery slope opposition groups seek to avoid.

A MILC and Honey Compromise

With both sides in the dairy policy debate set in their positions it is difficult to see a path to compromise. How can we offer a retooled dairy farm safety net that: (i) works for small and large-scale dairy farm managers; (ii) is fiscally responsible; (iii) does not mute market supply and demand signals; and (iv) does not require a market stabilization program? We propose a new policy alternative, one we decorously label “MILC and Honey”. This program would accomplish all of these goals by increasing eligibility of MILC to 4 million pounds per year and allowing farms an option to choose annually between 1) MILC participation, or 2) a stand-alone margin insurance program as their elected safety net. Specifically our proposal is for a combined program we term MILC-Insurance. This program will provide for:

In order to determine how this MILC-Insurance policy option would perform the margin insurance and MILC benefits were modeled for 5000 representative farms and four IOFC margin scenarios. Milk production data for 48 months was simulated for the representative farms. The data were structured to include consolidation trends, herd demographics, seasonal production patterns, and farm growth rates common to U.S. farms. In all of the analyses we use the milk marketings in months 1-36 to construct the production history and months 37-48 are used to analyze the performance of the margin insurance program, MILC, and MILC-Insurance.

These scenarios, depicted in Figure 2, are based on actual expected margins, as observed on January 15 in one of the previous seven years. The simulation techniques used for this analysis are similar to those employed in Newton, Thraen, and Bozic (2013). 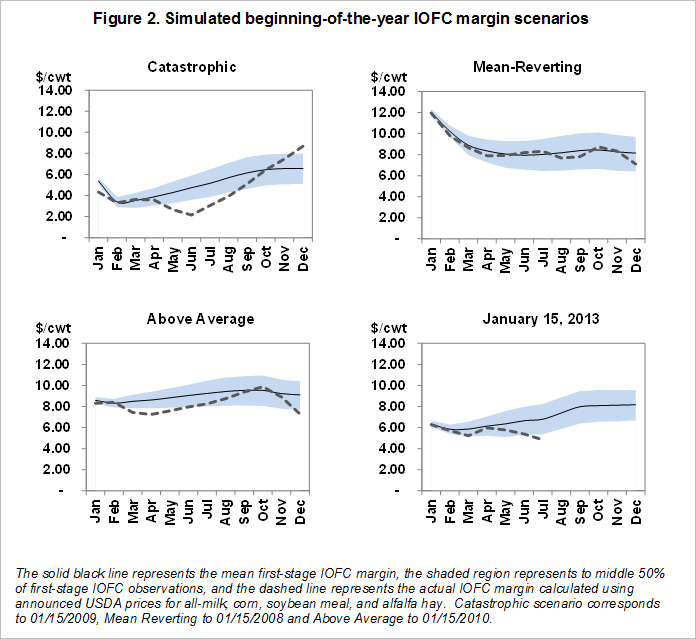 Consider first the benefits of DFA (Table 1), when anticipated IOFC margins are catastrophic the net benefits of DFA are up to three times greater than payments under a counter-cyclical payment program for the 5000 farms in this analysis. For example, given 2013 margins DFA would provide $76 million dollars in revenue support while the MILC program would provide only $23 million dollars (Note: Financial outlays reflect only the simulation results and are not indicative of total dairy farm safety net outlays by the Government). During favorable margin outcomes such as a mean-reverting margin or an above-average margin the support from DFA is less than the support received from MILC. In fact, during an above-average margin outcome MILC would still provide a marginal amount of income support while the margin insurance program support is near zero. This disparity is due to the fact that during times of low milk and low feed prices an IOFC program may not pay an indemnity, while the MILC program may still trigger a payment if the feed adjusted Boston class I price of milk is below $16.94/cwt. 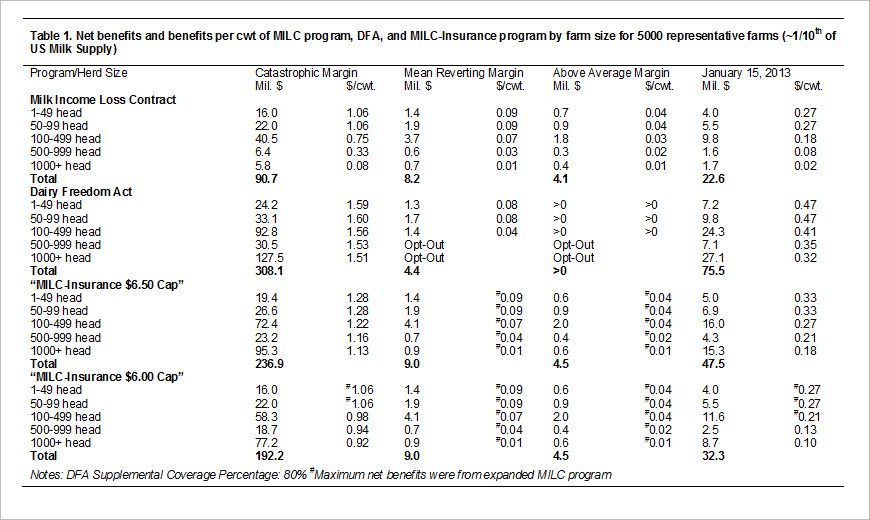 As a joint program, MILC-Insurance combines the benefits of both programs and ensures a safety net on either the milk price or the IOFC margin. As a result, during favorable margin outcomes the combined program does not reduce the expected benefits compared to a MILC only program. In fact, based on the simulation results all farms (large and small) would benefit more from a counter-cyclical MILC program when margins are favorable. It is only when IOFC margins fall to low levels would an IOFC program be preferred to MILC.

When IOFC margins are poor the MILC-Insurance program would provide two times the support of MILC for the 5000 farms in this analysis. For example, given 2013 margins combined program would provide $32-48 million dollars while MILC would only provide $23 million dollars. The difference in the MILC-Insurance program payments is due to the $6.00 and $6.50 supplemental insurance cap, with $6.50 coverage providing an additional $16 million in revenue support to dairy farmers.

Relative to program preference, we find that with a $6.00 MILC-Insurance program smaller farmers would elect to remain in the MILC program compared to the IOFC program. The reason small farms may elect MILC over margin insurance is the MILC is a no cost to participate program; thus even if margin indemnities are higher than MILC payments, after paying premiums MILC benefits are actually higher than IOFC insurance indemnities. When $6.50 coverage is offered the expected benefits of IOFC exceed those of a MILC program ($4 million pound cap). This pattern of preferring MILC to IOFC insurance does not continue as the herd size grows. The reason large farms would prefer the margin insurance over the MILC during poor margin outcomes is the 4 million pound benefit constraint results in the effective revenue support per cwt dropping as farm size increases.

Results indicate that the MILC-Insurance program would provide benefits to both small and large dairy farm operators by allowing them to choose their safety net annually. This new alternative would provide greater support to small farmers compared to the existing MILC program by expanding eligible pounds. For farmers growing a majority of their feed the target price MILC program provides a safety net to their primary revenue risk – milk price. For larger dairy farms (and farms who purchase feed) the IOFC program provides the ability to mitigate both milk and feed price variability. Thus the opportunity to participate in one or the other provides a continuous safety net program in any IOFC environment for all dairy farmers.

From fiscal perspective, this program would also reduce the costs by as much as 60% compared to DFA if IOFC coverage from $4.00 to $6.00 is offered. These cost savings fall to just under 40% when $4.00 to $6.50 coverage is offered. Finally, by offering insurance coverage only up to $6.50 a stand-alone margin insurance program may not mute market signals implicit during low IOFC margin events compared to an $8.00 insurance option. By directing market signals to the dairy farmers they can respond to negative price signals not by liquidating their herd completely, but by reducing output. A slight reduction in output, while supporting dairy farm revenue with $6.50 insurance coverage, would provide dairy farm stability and serve to prevent rapid declines in the U.S. milking herd similar to those witnessed in 2009.

As means to end the stalemate between supporters of the House and Senate dairy titles we propose serious consideration on a new dairy safety-net program. This program will: (i) work for small and large-scale dairy farm managers alike; (ii) be fiscally responsible, providing more support than the current MILC yet costing significantly less than the currently debated programs; and (iii) does not mute market supply and demand signals. This new policy alternative which we title MILC-Insurance would accomplish all of these goals by increasing eligibility of MILC to 4 million pounds per fiscal/calendar year and by allowing farms an option to choose annually between MILC and a stand-alone margin insurance program as their elected safety net.

The MILC-Insurance program saves money relative to the stand-alone margin insurance program by capping insurance at $6.00-$6.50 per cwt. With the savings the revenue can be redirected to an expansion of the MILC program; effectively offering the best of both programs (counter-cyclical revenue support or catastrophic margin insurance). Farms would no longer have an incentive to opt-out of the margin insurance and would instead opt for the no-cost MILC program when anticipated margins are favorable. This would allow all farms, regardless of size or management style, to participate in a government sponsored safety net program. Such a program, which offers continuous support, may prevent ad-hoc disaster payments in the future.