While other factor also impact profits, a major factor impacting relative profits is relative corn and soybean prices. Relative prices often are measured as the soybean-to-corn price ratio, which equals soybean price divided corn price. Between January 1975 and September 2013, the soybean-to-corn price ratio in Illinois has averaged 2.52 (see Figure 1). Values below average indicate that prices cause corn to be relatively more profitable than soybeans, and vice versa. 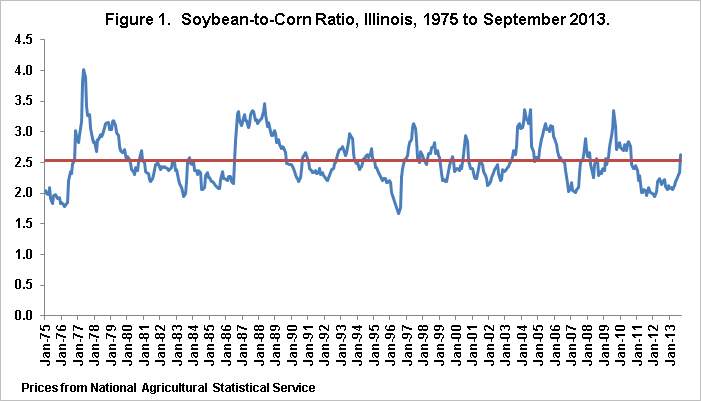 Overall, the above prices suggest that 2013 soybean returns will be relatively higher than 2013 corn returns. Harvest-time bids in 2014 suggest a more “normal” relationship between corn and soybean returns. 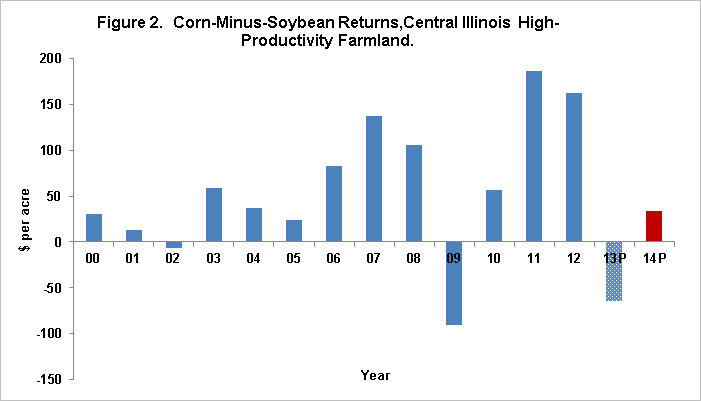 More detail on projected returns can be seen in the crop budgets shown in Table 1. These budgets are adaptations of 2014 Illinois Crop Budgets available in the management section of farmdoc (available here). Note two items on these budgets. First, corn price is set at $4.50 per bushel and soybean price is set at $11.40 per bushel. These prices differ slightly from the 2014 Crop Budgets on farmdoc, and reflect current cash bids for 2014 harvest-time delivery. 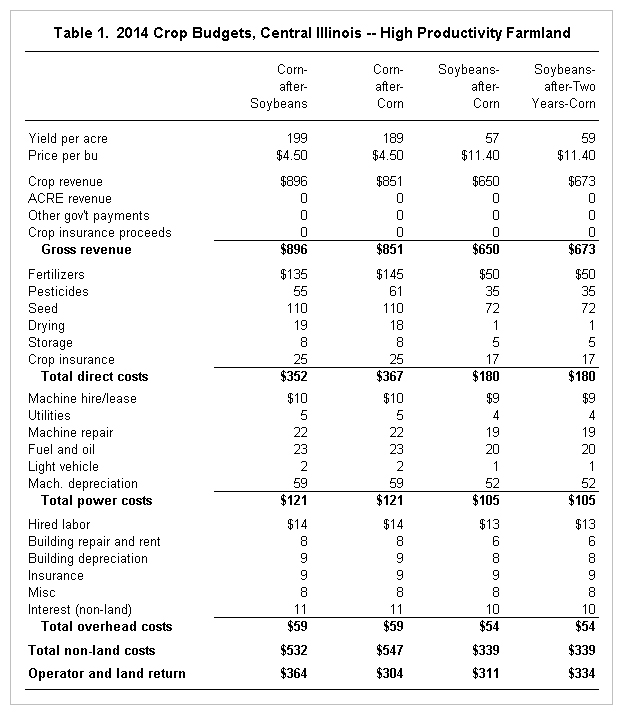 The second is fertilizer costs. Fertilizer costs for corn-after-soybeans is projected at $135 per acre, considerably below the $200 actual value for 2012 and $170 projected value for 2013. Fertilizer prices have declined considerable from 2013 levels. Anhydrous ammonia prices currently are in the high $600 per ton range, compared to the mid to high $800 per ton range for much of the 2012-13 growing season. Lower fertilizer prices in general and nitrogen prices in particular causes corn returns to increase relative to soybean returns.

In 2014, corn is projected to be more profitable than soybeans on central Illinois farms with high-productivity farmland, differing from 2013 projections in which soybean returns exceed corn returns. While the current 2013 soybean-to-corn price ratio is high, harvest-time bids for 2014 lead to near average soybean-to-corn price ratio. Near average prices, along with lower fertilizer costs, then lead to corn being projected more profitable than soybeans in 2014. While 2014 corn-minus-soybean returns are projected positive, corn returns are projected to exceed soybean returns by less than the average corn-minus-soybean returns from 2006-2012. Overall, these return projections do not suggest large shifts in acres between corn and soybeans.

Since relative yields and costs do vary across farms, farms should evaluate profitability on their farm. Relative profits may differ from the averages shown in this post.