Data from Illinois Farm Business Farm Management were used to summarize net incomes from farms with and without crop insurance. Farms had to meet the following criteria to be included in this analysis: 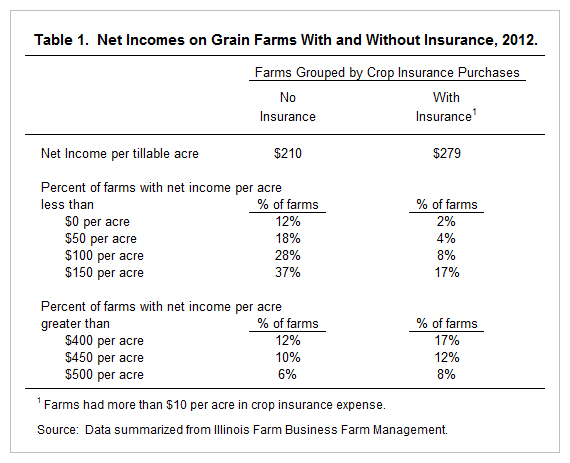 Factors other than yield also impact income distributions. One factor was timing of grain sales. In 2012, those farms with more pre-harvest sales tended to have lower incomes than farms with fewer sales. Obviously, timing of grain marketing will not have the same impact in different years.

Droughts have differential impacts on yields across farms, with some farms having much lower yields than other farms. Yield differences then lead to large differences in net incomes across farms. Some farms will have dramatically low incomes while other farms will have above average incomes. Crop insurance payments occur primarily on low revenue farms, thereby reducing the number of farms at the low end of the income distribution.

Often, average crop revenue is reported for a region, such as for the state of Illinois. These regional averages use average yields for the region and average prices for the region. Often, average crop revenue for a region during a drought year will be near or above expectations prior to planting, as percentage increases in price often will be of the same or higher magnitude as percentage decreases in yield. Because average revenue has not declined, the following policies concern sometimes arises: Why are large crop insurance payments occurring in years in which average revenue is not low?

Crop insurance payments reduced the proportion of farms that would have had low incomes in 2012. Crop insurance provides meaningful risk protection to grain farms.