Crop yields vary considerably across farms. This range is illustrated for the 2012 drought year by examining corn yields for farms enrolled in Illinois Farm Business Farm Management (FBFM). Variability illustrates manners in which averages abstract away from the variety of results that can occur within a year. It also illustrates the importance of crop insurance in a drought year.

Range in Corn Yields in Illinois 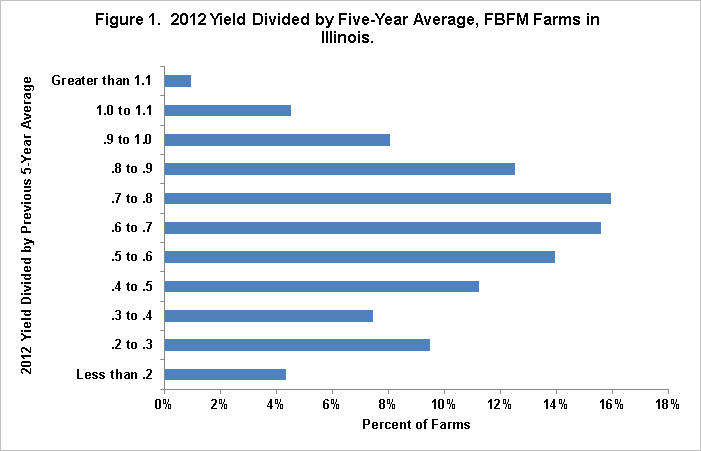 Some of the yield variability illustrated in Figure 1 is due to differences in the severity of the drought across Illinois. Generally, the 2012 drought was the most severe in southern Illinois and less severe in northern Illinois. However, even within a smaller geographical area, yields vary considerably. 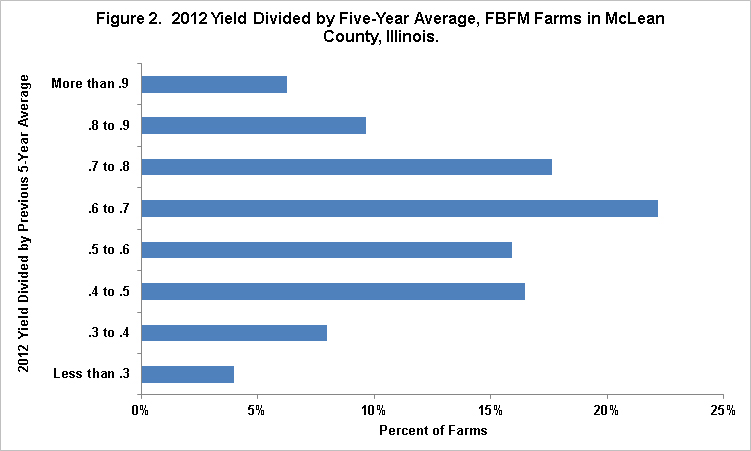 Focus often is given to average yields for a state or a county. While reasonable, focuses on averages abstract away from the variability of results that occur in yields. This is particularly true in drought years, as yield variability increases in adverse conditions.

This variability then will impact financial results. In a drought year, farms with relatively high yields will have very good years, as commodity prices increase when the drought impacts the heart of the corn-belt. On the other hand, farms with less than 50% of their average yields will have poor income yields, particularly if those farms marketed grain prior to harvest. Farms that marketed grain prior to market may have to buy back bushels at a much higher market price, exasperating income problems.

Yield variability in 2012 points to the usefulness of crop insurance in protecting yields. All else being equal, those producers with lower yields would have had lower crop revenue. Crop insurance can make up these differences, evening out income results across farms with low yields