Corn returns for 2014 are projected under yield scenarios representing drought, median, and high yields for a farm expecting a yield of 195 bushels per acre with a $4.80 projected price. Operator and farmland returns are below $300 per acre for the medium and high yield scenarios. The highest returns occur in the drought scenario.

Expectations on yield and projected price serve as beginning points for evaluating potential return outcomes. An expected corn yield of 195 bushels per acre is used, matching expectations for high productivity farmland. The 2014 projected price, which will be used to set crop insurance guarantees, will be the average of settlement prices of the December 2014 Chicago Mercantile Exchange (CME) corn contract during the month of February. Given current levels of the CME corn contract, $4.80 per bushel is used as the 2014 projected price.

The outcomes from 1975 through 2012 are grouped into scenarios. Reported below are three of the scenarios that represent the range of returns that can occur in 2012: 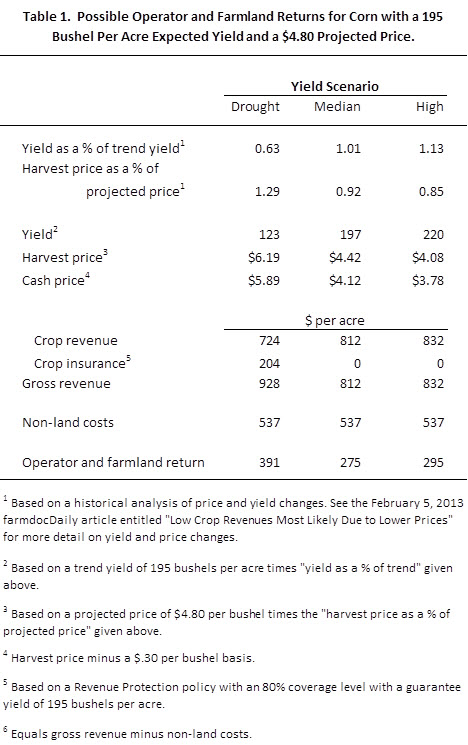 Note that there is a negative relationship between yield and price. Lower yields have higher prices. The highest projected price occurs in a drought year and the lowest harvest price in the high yielding year. Illinois is a major source of corn; hence, yield shortfalls in Illinois often lead to higher prices.

Also note that the range of projected prices is from $4.08 per bushel up to $6.19 per bushel. Results of this historical analysis suggest a likely price range for corn in the coming year is below prices in recent years. Also note that prices in the low $4.00 and high $3.00 range result from median and high yields.

Revenue is based on a cash price that is $.30 below the harvest price, thereby accounting for basis between cash and futures prices. Revenue also includes proceeds from a Revenue Protection (RP) at an 80% coverage level with a 195 bushels per acre guarantee yield. Non-land costs of $537 per acre are subtracted from gross revenue.

Somewhat ironically, a drought has the highest return, partially due to crop insurance payments. Because 2014 prices would be higher, 2015 prices likely will be higher after a drought than under medium and high yields.

In recent years, production of corn and other related crops have been below trend levels, resulting in higher prices. Yields in 2013 return to a more normal yield level. As a result, 2014 prices and incomes are projected lower. These lower income levels should be expected to continue into the future as long as production remains at or above expectations.