Because the Constitution requires the House and Senate to pass identical legislation before it goes to the President, the conference committee process was established for the two chambers to resolve differences in legislation each of them pass.  Conference committees have wide latitude in resolving differences to produce a final bill.  Few rules actually apply to conference.  The most common guidelines for conferees are that they are not to introduce completely new matters in conference that are outside the scope of the bills passed in the House and Senate.  Conferees also are not supposed to conference items where no disagreement exists between the House and Senate provisions.  These rules are difficult to enforce in practice and are not significant constraints.  Each chamber may also vote to instruct conferees on particular items but such instructions are not binding.  They are, however, indications of support in the House or Senate and are important to making sure the final conference product can pass both chambers.  The single most important procedural aspect of conference is that votes are on a delegation basis.  Thus, a majority of the House delegation and a majority of the Senate delegation must agree on each provision and the final product for it to come out of conference and be considered on the House and Senate floor.  This rule prevents either chamber from stacking the conference.

The 2013 conference committee is large, consisting of 41 total conferees — 29 House conferees and 12 Senate conferees (see Table).  The Senate delegation contains 7 Democrats and 5 Republicans all from the Senate Ag Committee.  Six of the House conferees have limited scope in conference (Foreign Affairs or Ways and Means) because jurisdiction for some provisions is with a committee other than the House Agriculture Committee.  Of the 23 House conferees empowered to vote on all issues in conference, 13 are Republicans and 10 are Democrats.  Of those, Speaker John Boehner has appointed what is known as a leadership conferee.  He is Representative Steve Southerland (R-FL) whose amendment on the House floor regarding the Supplemental Nutrition Assistance Program (SNAP) is often cited for the defeat of the first version of the House farm bill.  Minority Leader Nancy Pelosi has appointed Representative Marcia Fudge (D-OH) as her leadership conferee.  Representative Fudge is a leading opponent of the proposed cuts to SNAP in Title IV. 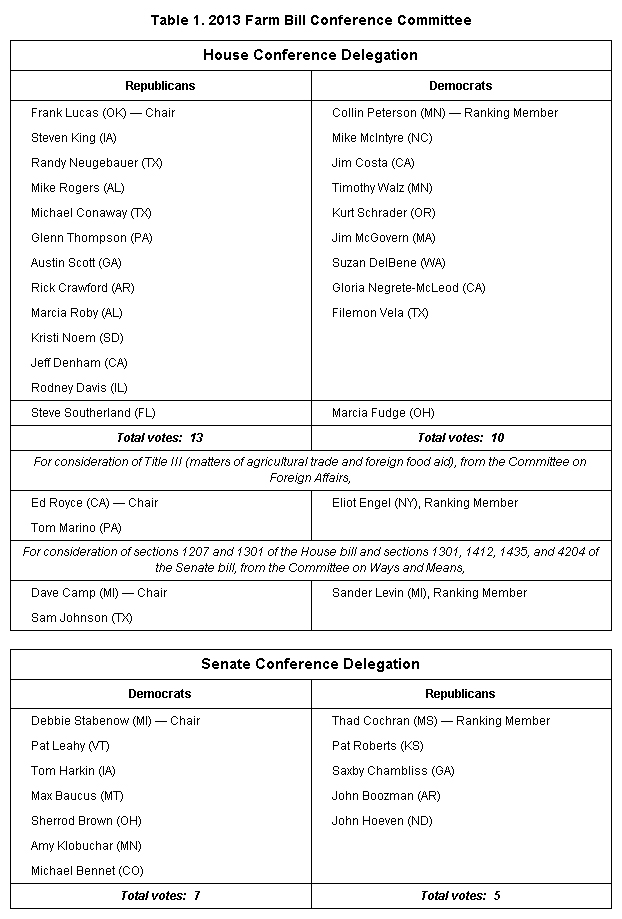 In considering the potential key differences between the House and Senate bills below, it is important to keep this information in mind.  Both Chairman Lucas and Chairwoman Stabenow bring strong majorities and significant support for their positions in conference.  In other words, without a comprehensive agreement and significant compromise across key differences, or unexpected shifts in votes and positions of at least two conferees in either delegation, the conference committee could easily deadlock, producing no final bill.  This becomes particularly relevant to Title I differences because in the Senate, Senator Roberts is not likely to vote with Ranking Member Cochran based on his past positions and votes.  In the House delegation, Ranking Member Peterson is likely to vote with Chairman Lucas on Title I crop programs based on his past positions and votes.  Each chair, then, can probably count on an even stronger position for most Title I matters.

In sum, the conference process is designed to be a vehicle for finding compromises on differences between the House and Senate positions for a bill to become a law.  As discussed further below, this farm bill and the process that has finally brought it to conference present some serious challenges for conferees. 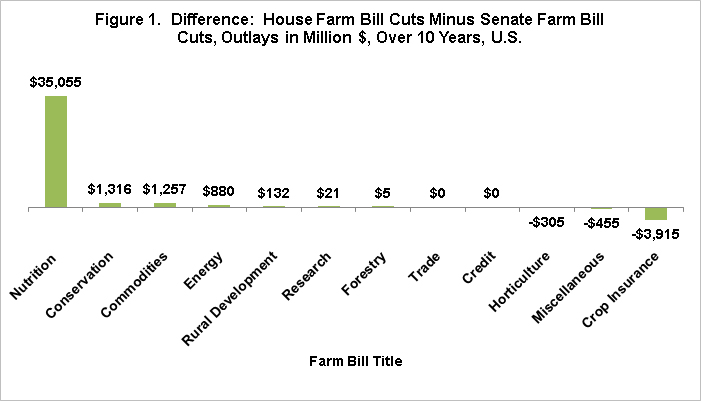 The second largest difference in projected spending occurs for the crop safety net, which consists of Title 1 (Commodities) and Title 11 (Crop Insurance).  Both bills reduce Title 1 spending by eliminating direct payments.  Both bills increase spending on Title 11 by enhancing a number of insurance features, such as allowing enterprise units for irrigated and non-irrigated crops on the same farm, and by establishing a new insurance program called the Supplemental Coverage Option (SCO) for all crops except cotton and the similar Stacked Income Protection (STAX) program for cotton.  SCO and STAX are county shallow loss programs that farms can elect to add on top of their individual insurance, thus providing assistance with smaller losses.

Despite the similar direction of changes, the House spends $3.92 billion more on insurance than the Senate while the Senate spends $2.55 billion more than the House on Title 1 programs, excluding disaster assistance.  These differences in spending on the two components of the farm safety net are not trivial.  Crop insurance is a single year risk management program because its price component is reset each year to reflect current market conditions.  In contrast, Title 1 programs provide assistance against multiple-year declines in revenue because their targets are either fixed by Congress or set by a moving average.  Moving averages adjusts partially, not completely, to current market conditions.  Thus, the House proposes to spend more money on single year risk management programs while the Senate proposes to spend more money on multiple-year risk management programs.  This difference reflects an important question:  how much emphasis should be placed on multiple year risk vs. individual year risk?

Three other notable differences are disaster assistance (in Title 1), Title 2 (Conservation), and Title 9 (Energy).  The House spends $1.29 billion more for disaster assistance; with aid for livestock producers a key difference.  Adding together all proposed changes in spending on Title 1 programs finds the House proposes to cut $1.26 billion more from Title 1 than the Senate (see Figure 1).  Both the House and Senate cut funding for Title 2; however, the House spends more on the Environmental Quality Incentives Program (EQIP) but less on the Conservation Reserve (CRP) and Conservation Stewardship (CSP) programs.  The House allocates no new spending above the baseline for Title 9 while the Senate spends $0.9 billion more on a variety of energy programs. 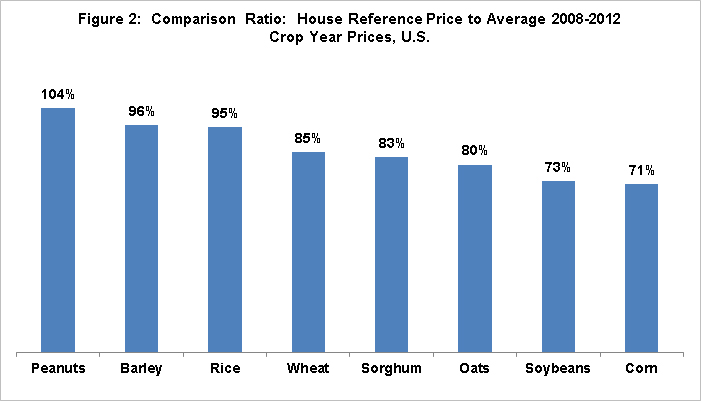 Many paths forward exist, with these 3 spanning the possible outcomes:

As of the writing of this post, we think the first 2 paths have about the same probability of occurring.  The last path seems unlikely but we do not think its probability is zero.  The last 2 paths would normally not be in the realm of possible farm bill outcomes, but much of the politics and partisanship surrounding this farm bill is consumed with cutting federal spending.  If Congress reaches some form of a budget deal, it is expected to be smaller and more designed to replace the current sequestration cuts.  Agriculture would be expected to make a contribution to such an agreement, with the most likely source of funds being a cut in direct payments.  A much less likely and more drastic outcome would involve eliminating all Title 1 support in order to capture substantially more savings to pay for sequestration.

It is easy to point to nutrition programs as the likely reason that a new farm bill will not occur.  However, we think the farm safety net issues are just as, and maybe more divisive.  Compromise will require not only considerations of content differences but also process considerations of how to get a bill passed in a contentious political environment focused on the level of government spending.  Whether the bill is an extension or a new bill, it is distinctly possible that the bill will be attached to the federal budget deficit and concurrent spending resolution that must be passed by Congress.