There is a growing concern over the recent rise in farm debt use,  largely based on the role farm debt played in the sector-wide boom and bust of the 1970’s and early 1980’s. This post addresses the link between Federal Crop Insurance (FCI) and farm debt use.

We examine several uses of debt at the farm level using data from the USDA’s Agricultural Resource Management Survey (ARMS). ARMS is an annual survey of farm and ranch operators jointly sponsored by the Economic Research Service (ERS) and the National Agricultural Statistics Service (NASS) of the USDA. The survey collects farmer-reported information on farm finances, resource use, and household economic wellbeing. The primary sampling unit is all establishments that sold, or normally would have sold, at least $1,000 of agricultural products during the year.

We limit our analysis to farms with over $250,000 in sales and farms for which the primary operator’s principal occupation is farming (or “farm businesses” in USDA nomenclature). We further limit our sample to farm businesses that specialized in field crop production, including wheat, corn, soybeans, sorghum, rice, tobacco, cotton, peanuts, other cash grains, and oilseeds. In other words, we limit our analysis to farms that are most likely to participate in FCI. The survey respondents represent a population of approximately 228,000 farm businesses, and these farms can be further classified into three categories by acreage:

Farm Debt use by farm size with Federal Crop Insurance 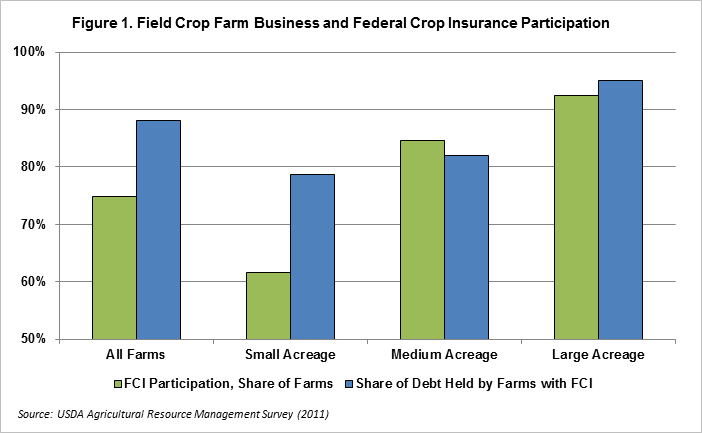 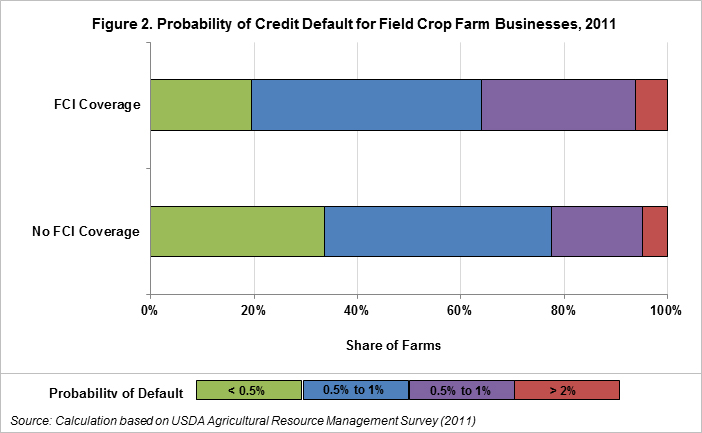 An increasing share of U.S. farms use Federal Crop Insurance as a risk management tool, and the majority of field crop farm debt is held by farms that participate in FCI. As farms increase in acreage size, debt is increasingly concentrated in farms with FCI coverage. Farms that participate in FCI are more leveraged and have a higher probability of default. FCI participation and its relation to farm debt use could have positive or negative effects on the farm sector. There is a potential increase in access to credit by creditworthy farmers which would increase investment and add value to the farm economy. Alternatively, farmers may take on higher levels of debt than they would have without FCI which potentially leads to repayment issues.

This post is based on a recent Choices article published by the Agricultural and Applied Economics Association. It is available here: Ifft, J., T.H. Kuethe, and M. Morehart (2012) “Farm Debt Use by Farms with Crop Insurance” Choices 28 (3).

The views expressed are those of the authors and should not be attributed to ERS or the USDA.