Since 2006, crop insurance has been the dominant crop safety net program.  However, the prosperity that has characterized this period may be coming to an end.  Thus, crop insurance may perform differently in the future than during the past few years.  Therefore, this post examines the performance of crop insurance since 1980 on an important metric:  how well has insurance covered the cash plus land cost of producing corn and soybeans.

Beginning with 1975, the U.S. Department of Agriculture (USDA), Economic Research Service has surveyed farmers about their cost of producing the major program field crops, including corn and soybeans (see here).  This study specifically examines cash cost plus the charge for land.  Cash costs include, among others, seed, fertilizer, chemicals, custom operations, fuel, repairs, and hired labor.  Farms often borrow money for their cash plus land costs to cash flow production between the planting and harvesting of a crop.  Thus, these costs are a common concern for banks and other providers of credit.  It is important to note that the USDA cost of production data are not strictly comparable over time due to changes in the survey methodology and information collected.  Nevertheless, the data set provides a reasonable perspective on the cost of producing these crops over time. 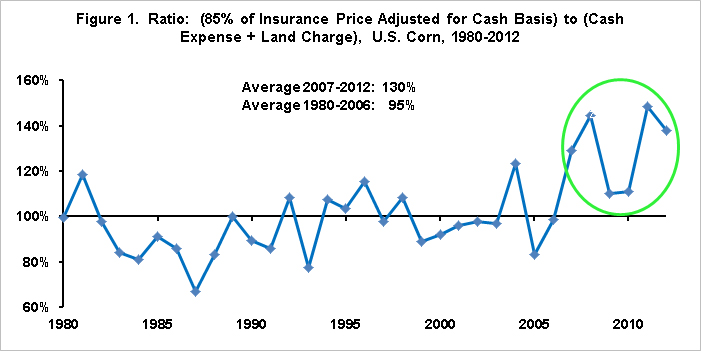 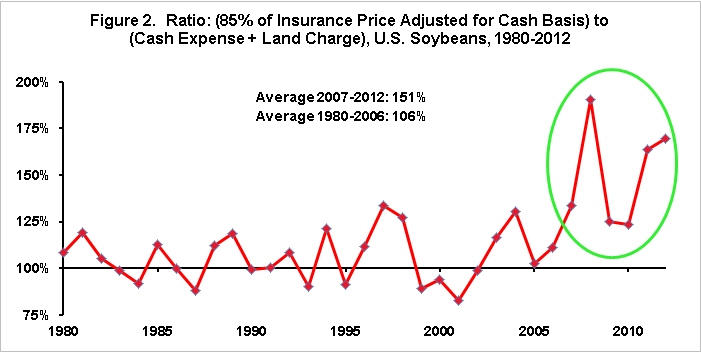 The preceding observations suggest that farms and their credit providers may have interesting conversations this winter about the appropriate level of insurance.  Credit providers may want higher levels of insurance to increase the cost coverage ratio.  In contrast, farms may want to purchase lower levels of insurance because their premiums are higher for 80% and especially 85% insurance not only because coverage is higher but also because federal subsidy levels are lower.  It is therefore not clear that farmer spending on insurance will decline even with the lower prices, which translates into lower insured values and thus lower premiums, everything else constant.  Everything else constant does not hold in this situation since the cost coverage ratio is likely to be lower.

Another potentially important observation is the historical difference in the cost coverage ratio between corn and soybeans.  The higher cost coverage ratio for soybeans probably reflects the lower cash costs per acre associated with producing soybeans relative to corn.  The combination of lower cash costs plus a potentially greater cost coverage ratio may push farms to substitute some soybeans for corn in their rotation, especially for high cash cost farms.  A common topic of policy discussion for Title 1 commodity programs is the planting distortions associated with fixed target prices.  Relatively little discussion has surrounded the potential issue of planting distortions among the various program crops caused by crop insurance.

Last, this study reinforces why credit lenders are vocal supporters of crop insurance.  For corn and in particular soybeans, crop insurance offers significant coverage of cash costs associated with producing a crop.  A growing policy concern has been the perceived increasing role of dealer credit to farms for purchasing inputs.  While we certainly do not understand the potential implications of this situation, crop insurance, especially at high levels of insurance, potentially mitigates this concern, at least for the initial year.  But, insurance prices are reset each year and will fully follow prices lower.  Thus, high cash cost producers may ultimately find themselves in trouble if they cannot adjust costs to lower prices in one year.  Hence, it is important for farms to have a strategic plan for cost flexibility.  An associated policy implication is that crop insurance has a hole as a safety net program — multiple year declines in price and revenue.  Thus, it is important for the current farm policy debate to consider what is the appropriate multiple year safety net that complements insurance.