download PDF
November 15, 2013
farmdoc daily (3):219
Recommended citation format: Krapf, B., D. Raab and B. Zwilling. "Expense Election (IRS Code Section 179): Where are we going and where have we been?" farmdoc daily (3):219, Department of Agricultural and Consumer Economics, University of Illinois at Urbana-Champaign, November 15, 2013. Permalink

The Internal Revenue Code Section 179, or Expense Election, will fall to $25,000 indexed for inflation in 2014.  This is a drastic change over the last four years that have been $500,000 and could impact the way you tax plan for 2013.  The last time we have seen these levels was in 2002 when it was $24,000.  Table 1 shows the expense election levels from 2002 to 2013.  What impact will this history of using a larger expense election amount have on tax years 2014 and beyond?  Let’s look at farms from Illinois Farm Business Farm Management. 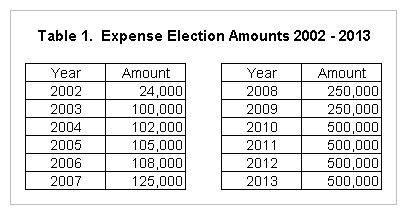 Farms in this study include Illinois grain and livestock farms that were sole proprietors and had their sources and uses balance within .5% of each other.  The majority of these farms were grain farms.  In Table 2, we look at the expense election amount taken by the farm as a percentage of total tax depreciation for that farm.  Tax depreciation includes regular depreciation on depreciable assets; expense election amounts; and any bonus depreciation.  The all farms group includes all farms that met the above criteria, whether or not they had any capital purchases.  The rest of the table shows the different percentages based on the level of all capital purchases made on the farm.