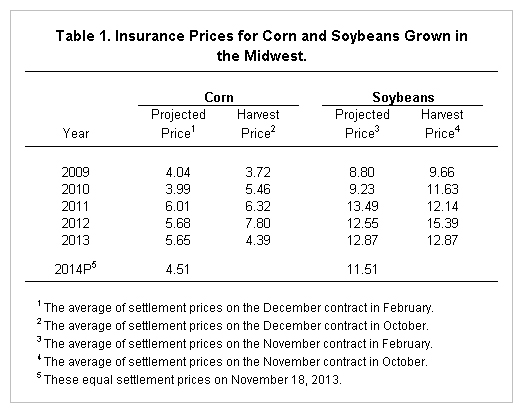 In 2014, non-land costs of producing corn are projected near $540 per acre and cash rent for farmland with a 190 bushel guarantee yield averages near $290 per acre, giving $830 per acre in costs.  An 80% coverage level has a guarantee of $686, considerably below the $835 cost level.  An 85% coverage level has a $728 per acre guarantee, still below $830 of costs.  In most cases, farmers will be in a loss situation before crop insurance makes payments on corn.

Downside revenue risks likely will be greater in 2014 as compared to 2013.  Crop insurance products will provide much lower guarantee levels and, in most cases, farmers will face substantial loss situations before crop insurance makes payments.

These lower guarantees point to one issue concerning relying only on crop insurance to provide the farm safety net.  Crop insurance works well when projected prices are relatively high.  When projected prices are lower, safety nets also are lower.  The limits of within year protection offered by crop insurance points to the need for across year protection offered by revenue programs in the commodity title of the Farm Bill, such as ACRE under the 2008 Farm Bill and the various revenue options under consideration for the next Farm Bill.