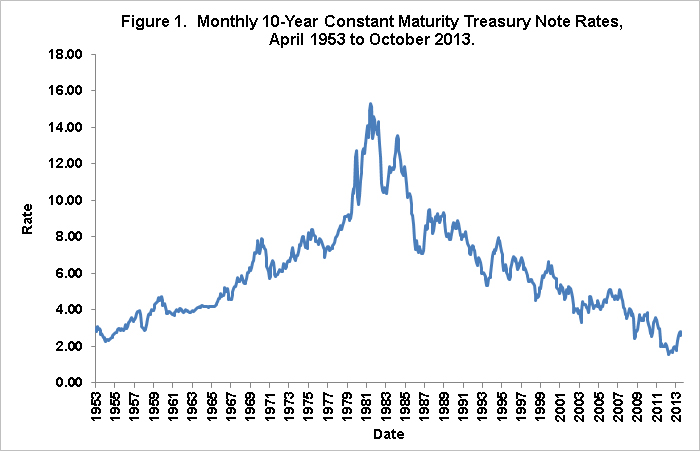 Almost by necessity the period of decreasing rates has come to an end.  From current low levels, it is difficult to see how interest rates could fall further.  In fact, 10-year rates have increased slightly in recent months.  Between May 2012 and May 2013, 10-year rates were below 2%.  In June, rates climbed above 2% and increased each month until October:  2.30% in June, 2.58% in July, 2.74% in August, and 2.81% in September.  In October, the 10-year rate decreased to 2.62%.   Much of this recent increase can be attributed to Federal Reserve Board discussions of slowing Quantitative Easing, a program involving the purchase of longer-maturity bonds by the Federal Reserve designed to lower long-term rates.

The decreasing rate period coming to an end does not signal a period of rising interest rates.  If certain Federal Reserve Board policy makers have their way, a protracted period of low interest rates could ensue.  In her confirmation hearings for Federal Reserve Board chair, Janet Yellen indicated that she prefers to continue the period of accommodative monetary policy.  If successful, this policy would lead to a protracted period of low rates, with rate variability similar to that experienced in the last six months.  This protracted low rate period likely will occur, unless the economy unexpectedly grows leading to higher real interest rates or inflationary pressures grow leading to higher nominal rates.

Since the mid-1980s, marginal investment decisions have been aided by decreasing interest rates.  For example, there may have been little margin in cash flows from a debt financed investment at the time the investment was original undertaken.  Decreasing rates often led to lower interest payments after the investment, thereby causing cash flows to become more favorable.

From 1985 through 2013, 10-year rates decreased an average .26 percentage points each year, leading to a reduction of 1 percentage point every four years.  It is unreasonable to expect similar reductions in the future.

Given the end of decreasing rate period, farmers may wish to build more safety margin in their investment decisions.  It will be unlikely that decreases in rates will reduce debt servicing requirements in the future.  Moreover, there is a risk of increasing rates, leading to larger fund requirements to service debt.