Insurance payments for 2013 Group Risk Income Plans (GRIP) policies will not be known until the National Agricultural Statistical Service (NASS) releases county yields in late February, 2014.  Herein, GRIP payments are estimated for 2013 based on released Crop Reporting District (CRD) yields. As a result of price decline, GRIP will make payments for corn in many Illinois counties.  GRIP is not likely to make payments for soybeans in Illinois.

For each county, the county yield is estimated by taking the expected yield used by the RMA in calculating GRIP guarantees and multiplying it by the respective CRDs 2013 yield as a percent of trend yield.  These projected county yields then are used in estimating GRIP payments.

2013 GRIP Payments for Corn in Illinois 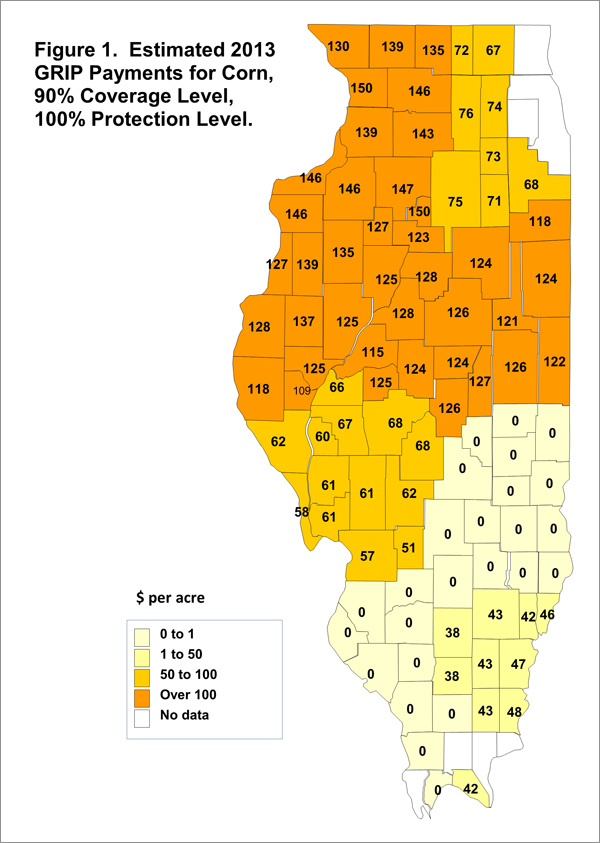 Many counties in northern and central Illinois are expected to have payments that exceed $100 per acre.  Given the estimation procedures, counties in the southeast and west southwest CRDs are not projected to have payments.  These two CRDs are have yields projected to be 17% and 19% higher than trend yields, offsetting the revenue losses resulting from price declines.

2013 GRIP Payments for Soybeans in Illinois