The first in a five part series dealing with controlling costs on grain farms.

Corn and soybean prices are likely to be considerably lower in the next several years as compared to prices from 2010 through summer of 2013.  Lower commodity prices then will lead to lower crop revenues.  While crop revenues have come down abruptly, costs likely will decrease much more slowly, and likely not decrease as much as revenues have fallen.  Moreover, management decisions may influence the extent to which costs decrease.  This post documents cost changes that have occurred over time, thereby showing historical cost decreases as a guide for potential future cost decreases.  Future posts will examine specific costs and potential ways of lowering those costs. 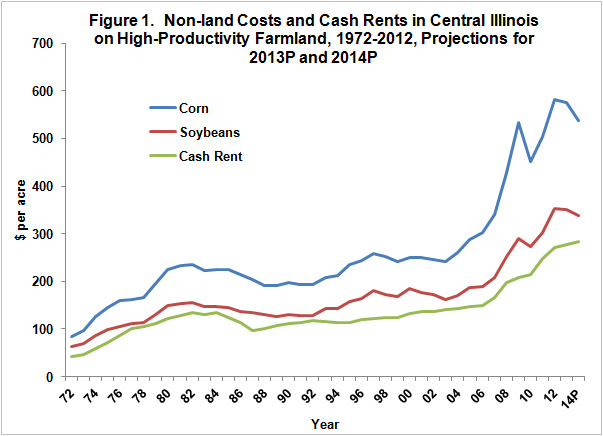 History would suggest that decreases in costs are possible.  However, those decreases were not of the same magnitude as preceding cost increases.  Moreover, lowering costs likely will be difficult, requiring management effort.  Following posts in this series will focus on specific costs where potential for cost decreases exist.  Focus will be given to 1) fertilizer, 2) machinery, 3) input decisions in general, and 4) cash rents.