The current Farm Bill process has now been underway for over 2 years. In 2012, the 2008 Farm Bill was extended for 1 year as larger budget issues delayed the standard process. In 2013, both the Senate and House have passed Farm Bills which are currently being reconciled in a Conference Committee comprised of members from both chambers.

Both   versions   are   credited   with   achieving savings  relative  to  existing  programs  via changes to the Commodity, Nutrition, and Conservation, and Crop Insurance Titles. These proposed  changes   suggest   a   shift   in   farm program focus from income supports to risk management where the federal crop insurance program serves as the main safety net for crop producers.

Existing commodity programs – direct and counter-cyclical, ACRE, and SURE – are eliminated in both Farm Bill proposals. The Senate version replaces these programs with the combination of both price  supports  and  a shallow-loss  revenue  program.   The  House version would offer  producers the  choice between  price  supports  with  updated  target prices  for  eligible commodities,  or  a  county- level shallow-loss revenue program. In addition, a new crop insurance program  –  the Supplemental Coverage Option – is created in both versions.

The shallow loss revenue programs base their guarantees on Olympic averages of recent yields and national  cash  prices,  and  have  payment limits  and  eligibility  rules  based  on  adjusted gross income.    In contrast, supplemental insurance coverage bases its guarantee on insurance (futures) prices and trend yields and will not be subject to payment limitations, but will require the producer to pay a subsidized portion of the premium.

Thus, these new and modified programs will require producers to make choices among programs which offer varying forms of price and yield risk protection. Furthermore, their individual crop insurance purchases may also influence the risk protection offered by the supplemental insurance coverage  option  and their choice among the modified commodity programs.

The two versions of the Farm Bill achieve a substantially different level of savings out of the food assistance programs, mostly from the Supplemental Nutrition Assistance Program (SNAP, formerly known as food stamps).  More importantly,  the  policies  that  each  uses  to achieve those savings have significant political implications for passing the Farm Bill through the House and the Senate and getting it signed into law by the President.

Despite more than 2 years of debate, the likelihood of a Farm Bill being passed in 2013 is still very uncertain. The Farm Bill Conference Committee is  currently  working  towards creating a Farm Bill keeping in mind the December 13th deadline for the Budget Committee.

The slides for this presentation can be found at:
http://www.farmdoc.illinois.edu/presentations/IFES_2013
Other publications:
Chite, R.M. "The 2013 Farm Bill: A Comparison of the Senate-Passed (S. 954) and House-Passed (H.R. 2642, H.R. 3102) Bills with Current Law." Congressional Research Service, Washington, DC. http://www.fas.org/sgp/crs/misc/R43076.pdf 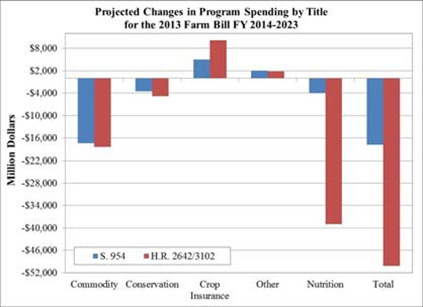