Farmland markets have experienced several consecutive years of historically high incomes and high rates of appreciation of underlying land values.  As a result, there has been a radical increase in interest in the asset class as an investment, and at the same time, considerable concern about the sustainability of the farmland prices, with attendant concerns about potential corrections or adjustments. Recent declines in commodity prices followed generally positive yield reports as yields recovered from drought conditions experienced in 2012. Through the same period, cash rental rates (and other farm production expenses) have generally risen, although they have been observed to be “sticky” in both directions, thus leading to questions about the potential response if farm incomes were to decline. And, to add to the informational cacophony, USDA recently released a revision to their 2013 income estimates which result in forecasted record farm incomes for 2013, following the previous record in 2012, despite the drought of 2012 and the softening grain prices during late 2013.

This session begins with context for the current farmland markets by examining recent valuation changes, income and rental market data, and performance relative to broader market conditions that help assess the rationality of the farmland market.

Importantly, the “price discovery” in farmland markets occurs in relatively thin markets in terms of fractions of total land that sells annually. Thus, it is important (and difficult) to assess the actual valuation impacts and average rates of return to land that has not actually sold. Turnover statistics, based on observed Department of Revenue transfer declarations show that arm’s length turnover remains fairly steady at about 1% of farmland per year. Thus, some reports of potential land value declines or failures to continue to increase may not translate to the bulk of agricultural parcels that do not turn over.

In order to assess whether the current land market “makes sense” and to address concerns about the future impacts of crop market conditions, RFS mandates, uncertainty over the farm bill and so forth, we also compare the current market information to macro market forces and to other financial markets.  One interesting finding is that land markets do not seem to view the recent record incomes as permanent. Instead, the current market prices suggest a more measured view of recent income fluctuations. Compared to other financial assets, farmland has performed very well, but reflects fundamental valuation principles as well.  Discounting income by a sensible market proxy for capitalization rate results in implied farmland values that closely track actual market values (except during the farm crisis in the early 1980s) leading to the conclusion that farmland markets are generally appropriately reflecting income expectations.

The session also provides information about the role of crop insurance in supporting income, and about key future determinants of farmland values and rental rates, and ends with a discussion of the future sources viewed as sources of greatest risks for farmland markets. 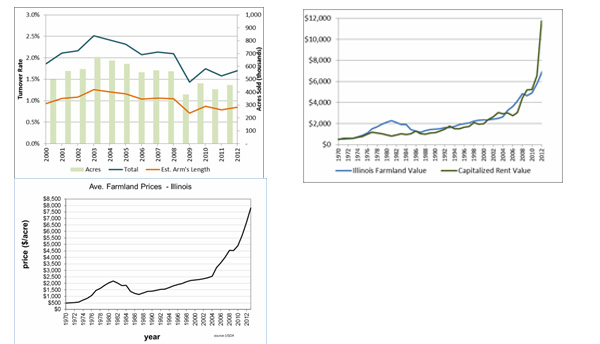