In a farmdoc daily post last week, we summarized the results of a research report that evaluates USDA forecasts and estimates for corn and soybeans. Many of the concerns about the forecasts and estimates since 2006 have centered on the accuracy of the quarterly USDA estimates of corn stocks.  Today’s post reviews the evidence from our report about potential problems with USDA corn stocks estimates.  This is the second in a series of farmdoc daily posts discussing the findings in the recent report, which can be found here. The research was funded by the Office of the Chief Economist of the USDA.  We begin with a brief overview of the USDA grain stocks estimates.

The National Agricultural Statistics Service (NASS) of the USDA provides estimates of U.S. corn and soybean inventories at the end of each quarter of the marketing year.  The reference dates for those estimates are December 1, March 1, June 1, and September 1.  Estimates of on-farm grain stocks (inventories) are based on data collected in the quarterly Agricultural Surveys in which a sample of producers are asked to identify the storage capacity of all structures normally used to store whole grains or oilseeds and to estimate the total number of bushels stored on the reference date on the total acres operated by the respondent regardless of ownership or intended use of the crops. Estimates of off-farm stocks are based on data collected in the Grain Stocks report from mills, elevators, warehouses, and other storage facilities.  This survey is intended to be a census of all commercial facilities.  Respondents are asked to identify the number of storage locations operated and being reported, the rated storage capacity of all locations being reported, and to estimate the number of bushels of grain stored at those facilities on the reference date.

NASS estimates of quarterly grain stocks provide important market information regarding the magnitude of consumption during the previous quarter of the marketing year as well the supply available for future consumption.  Unlike the USDA crop production forecasts, which can be compared to a final production estimate in order to evaluate forecast accuracy, there is no independent estimate for judging the accuracy of quarterly NASS stocks estimates.  Instead, we analyze the history of the NASS quarterly corn and soybean stocks estimates relative to pre-release estimates by private sector analysts.  While this type of analysis is limited due to the lack of a “final” benchmark, the history of differences between USDA and analyst stocks estimates should reveal estimates that market analysts found particularly problematic.

Newswires report the expected stocks estimates of various market analysts from which an average analyst estimate is computed.  Using the average analyst estimates reported by the Dow Jones Newswire (or their predecessor, Oster Dow Jones and Knight Ridder), the difference from NASS stocks estimates was calculated for each quarter for the 1990 through 2012 marketing years. Since analysts’ estimates of stocks are really estimates of usage or implied usage during the quarter that ends with the reference date of the NASS Grain Stocks report, we compute the differences as a percentage of quarterly usage.  This difference is commonly referred to as the “market surprise.”

Figure 1 presents the history of surprises for NASS implied usage estimates for corn over the 1990-2012 marketing years in chronological order.  Note that a positive surprise implies that market analysts under-estimated usage (over-estimated stocks) and a negative surprise implies analysts over-estimated usage (under-estimated stocks). This figure highlights the sharp increase in the volatility of market surprises for implied corn usage that occurred since 2006. There were only 7 instances out of 64 over 1990-2005 where the surprise exceeded 5 percent.  In contrast, over 2006-2012, there were 12 instances out of 28 where the surprise exceeded 5 percent.  Furthermore, double-digit usage surprises occurred three times during 2006-2012 (-11.55 percent: June-August 2009; -12.13 percent: March-May 2010; -14.66 percent: December-February 2012), and each substantially exceeded the largest surprise observed over 1990-2005 (+7.78 percent: March-May 1995). 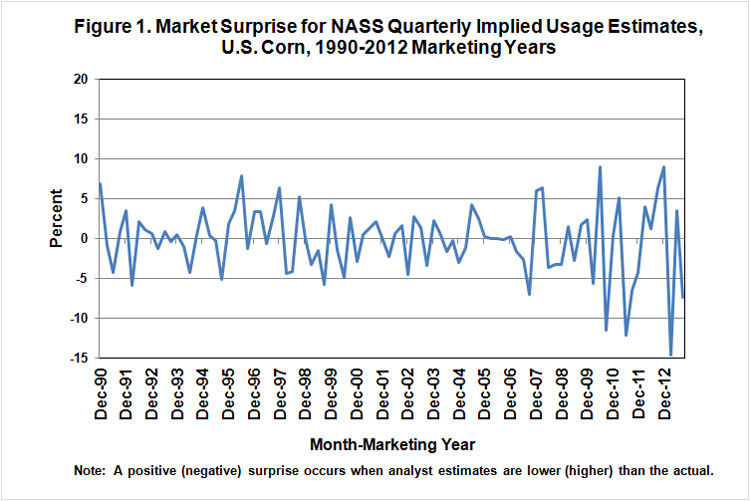 As a point of comparison, Figure 2 presents the history of surprises for NASS implied usage estimates for soybeans over the 1990-2012 marketing years in chronological order.  The contrast in the pattern of implied usage surprises for soybeans across all quarters in Figure 2 with that of corn in Figure 1 is striking.  There is little evidence that recent surprises in soybeans have been outside of historical ranges, whereas the evidence is overwhelming that surprises have been outside the historical range in corn. 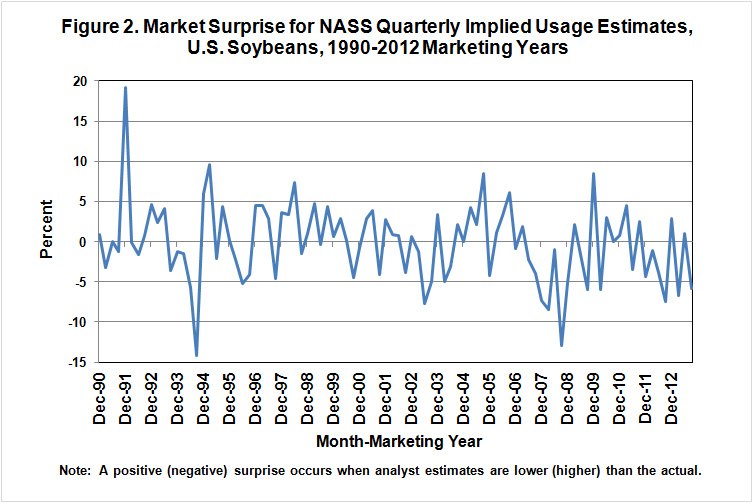 Further insight into the pattern of market surprises in NASS implied usage estimates for corn is provided by Figure 3, which shows the surprises by marketing year for each year between 2007 and 2012.  It is readily apparent from this figure that the most problematic surprises occurred in the 2009, 2010, and 2012 marketing years.  Surprises for the other three marketing years were generally within the normal range of plus or minus 5 percent.  Within the three problematic years of 2009, 2010, and 2012, there is also a clear tendency towards reversal of the surprises from quarter-to-quarter.  The pattern was especially strong in 2009 and 2012 when the surprises swung back and forth from positive to negative each quarter. 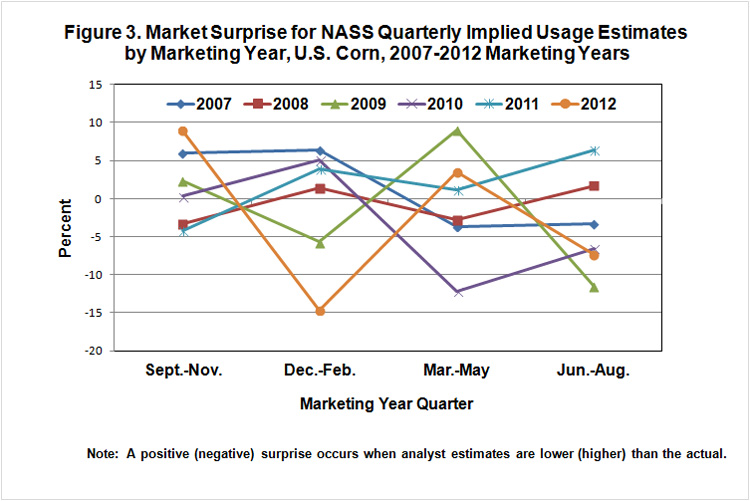 In sum, one pattern is abundantly clear–there has been a sharp decline in analysts’ ability to anticipate actual quarterly corn usage as implied by NASS Grain Stocks reports since the start of the 2006 marketing year.  This has undoubtedly decreased confidence in the integrity of the underlying stock estimation procedures among at least some market participants.  Since this pattern coincides with the era of tight supply and demand conditions and elevated grain prices that began in the autumn of 2006, there has been much discussion about how the two may be possibly related.  While it is not surprising that market participants are highly sensitive to data on stocks when supply and demand conditions are tight, the mechanism that ties together these conditions and the decline in analysts’ ability to anticipate NASS stocks estimates is far from obvious.  Our analysis indicates that any explanation needs to satisfy at least four criteria to have credibility:

There has indeed been a marked decline in the ability of market participants to anticipate USDA stock estimates for corn in recent years. In this sense a problem has developed with corn stocks estimates. Numerous explanations have been offered for the decline, ranging from problems with the survey procedures used by the USDA to the rise of ethanol production.  Any explanation must be able to account for several key patterns in the usage surprises in order to be valid.  Our next post in this series will delve into the explanations offered by market participants to determine if they can in fact explain these patterns.