In a farmdoc daily post last week, we showed that there has been a notable decline in the ability of market participants to anticipate USDA stocks estimates for corn in recent years. Numerous explanations have been offered for the decline, ranging from problems with the survey procedures used by the USDA to the rise of ethanol production.  We also argued in last week’s post that to have credibility any possible explanation for recently observed large surprises in corn inventory levels needs to satisfy four criteria: 1) Why corn and not soybeans?  2) Why 2006-2012 and not earlier?  3)  Why only in particular marketing years?  and 4) Why a pattern of reversals during marketing years?  In today’s post we use these criteria to examine some commonly proposed explanations for recent large surprises in USDA corn stocks estimates. The following sections provide a brief discussion of the identified explanations.  This is the third in a series of farmdoc daily posts discussing the findings of our recent report, which can be found here. The research was funded by the Office of the Chief Economist of the USDA.

It is argued by some that respondents to the USDA Agricultural Survey provide corn stocks estimates based on volume of inventory rather than weight of inventory.  That is, estimates are based on the rated capacity of storage facilities and the percent of capacity represented by the current volume of grain in the facility.  Estimates that reflect volume of grain in storage may not account for variation in density (test weight) of corn from year-to-year.  Since stocks are measured in terms of 56-pound bushels, not accounting for variation in density could result in reporting errors.  The logic of the argument is correct and might explain errors in individual reporting of stocks for corn and not soybeans and also explain why errors occur in some years and not others.  However, the argument falls short based on other criteria.  In particular, such reporting errors–including errors related to grain compaction–would not explain why some quarterly stocks estimates within the marketing year are near analyst expectations and others are not.  That is, the argument would not explain why respondents correctly account for density in some quarters but not others.

Mixing of Old Crop and New Crop Stocks for September 1

Analyst errors in anticipating September 1 stocks estimates of corn are often explained by claims that USDA stocks estimates include some stocks of the new crop harvested before September 1.  This explanation is likely incorrect for a number of reasons.  First, inclusion of new crop stocks in the estimates should result in analysts consistently anticipating stocks below the USDA estimate.  That clearly has not been the case.  Second, the USDA Agricultural Survey form specifically asks respondents to report only stocks of “old crop” grain.  Third, the Grain Stocks Report form for commercial storage facilities historically asked respondents to report only old crop inventories and more recently asks respondents to estimate old and new crop inventories separately.  Some error in distinguishing between the two should be expected, but a bias in those estimates would not be expected as some may over-estimate and some may under-estimate old crop stocks.

Some question if USDA survey procedures have kept up with the expansion of corn production outside of the traditional large corn producing states since 2006.  This argument lacks validity because USDA does not have Agricultural Surveys for individual crops.  Instead, surveys are conducted for a sample of all crop producers who are asked to account for all crop acreage and for stocks of all crops. Producers in the states where corn acreage, and presumably corn storage capacity, have increased would be appropriately represented in the sampling process for the surveys.  Similarly, commercial facilities are asked to account for stocks of all crops so that corn inventories in states where corn production has expanded are reported in the quarterly Grain Stocks surveys completed by these firms.  Moreover, this suggests that such an error would also extend to soybeans and fail the “why corn?” criteria.  Figure 1 illustrates that the amount of on-farm storage and corn production outside of the key 7 corn-producing states have actually increased in tandem. 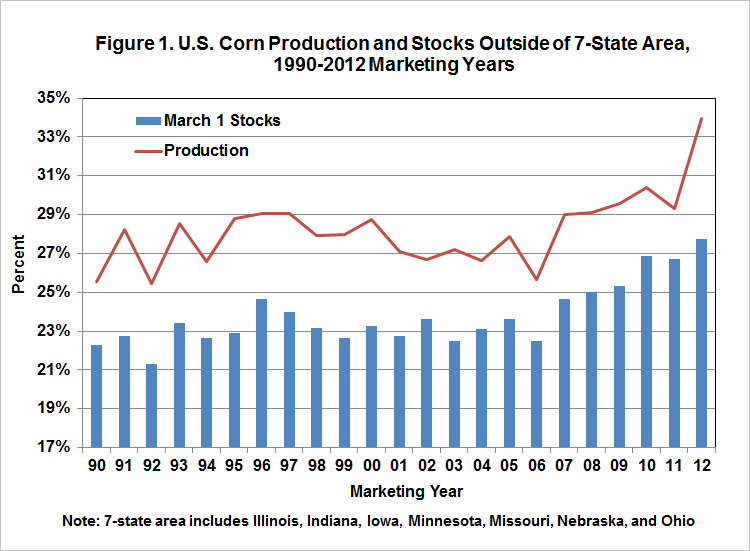 Some argue that the USDA Agricultural Survey has not adequately captured the impact of the increased number and size of on-farm storage facilities.  As shown in Figure 2, on-farm storage capacity has grown in absolute terms, but the argument that this has resulted in less accurate responses from on-farm survey respondents is lacking for several reasons.  First, it implies that producers have more difficulty estimating corn inventories if they have more and/or larger storage facilities than in the past.  This ignores the fact that grain handling and measuring technology (e.g., combine yield monitors, grain cart weight scales, etc.) have been improving at the same time.  The argument also implies that producers have more difficulty estimating corn inventories than soybean inventories and they have more difficulty in some quarters than in other quarters.  Finally, the argument implies that producers uniformly over- or under-estimate inventories in a particular quarter, but not in every quarter and that the direction of the bias changes from quarter-to-quarter. 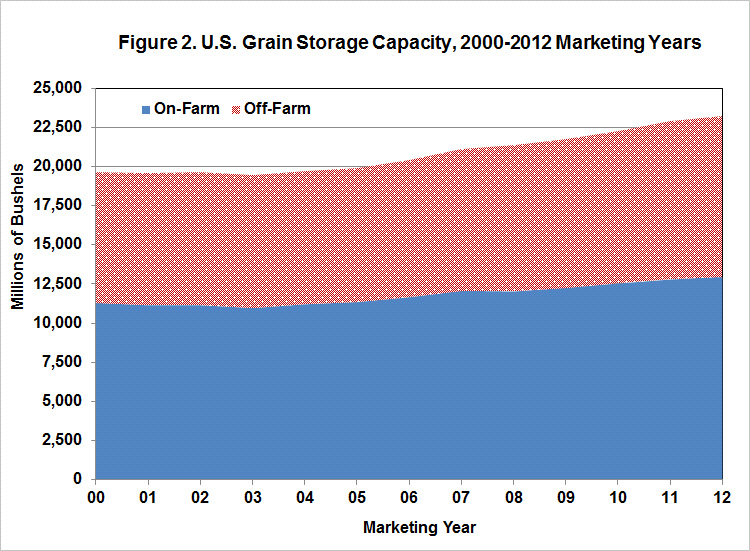 Changing Make-Up of Survey Sample During the Marketing Year

A recent criticism of USDA methodology for conducting the Agricultural Survey is that the group of respondents to the Agricultural Survey is not consistent from quarter-to-quarter and a new sample is selected each June prior to the end of the corn and soybean marketing years.  Critics argue that the changing number and make-up of survey respondents through the survey cycle could account for inconsistent stocks estimates from quarter-to-quarter.  Likewise, the difference in the samples when the new survey cycle starts in June is thought to create the potential for inconsistent stocks estimates. The criticism based on changing survey respondents appears to be without merit for three reasons.  First, since the methodology has not changed over time, it would not likely explain the more frequent incidences of surprises in the USDA corn stocks estimates since 2006.  Second, the sample size for the Agricultural Surveys is large enough and selected in a way that should produce statistically consistent results even with changes in the mix of respondents through the cycle.  Third, the changing make-up of the survey sample would not satisfy the “why corn and not soybeans” criteria.

Another criticism of the accuracy of USDA corn stocks estimates is that the rate of response to the Agricultural Survey has declined over time, resulting in less reliable estimates of grain stocks.  The magnitude of response rate is reflected in the imputation rates for the Agricultural Survey for the quarterly stocks estimates.  When respondents fail to provide specific estimates of on-farm stocks, USDA uses available information to impute an estimate for that respondent.  For example, if the respondent provides an estimate of storage capacity, an estimate of stocks can be imputed based on the average capacity-to-stocks ratio for those who provided complete information for the survey.  Where no information is provided, the stocks estimate for the respondent is imputed as the average of all respondents.  Figure 3 indicates that the imputation rates for the quarterly stocks reports have generally increased for corn, soybeans, and wheat since 2007 or 2008 crop years.  However, the imputation rates for corn and soybeans are very similar and lower than the rates for wheat.  Increased imputation rates should not have reduced the accuracy of USDA corn stocks estimates relative to soybean and wheat estimates and would not explain why some quarterly estimates resulted in surprises and did not for others. 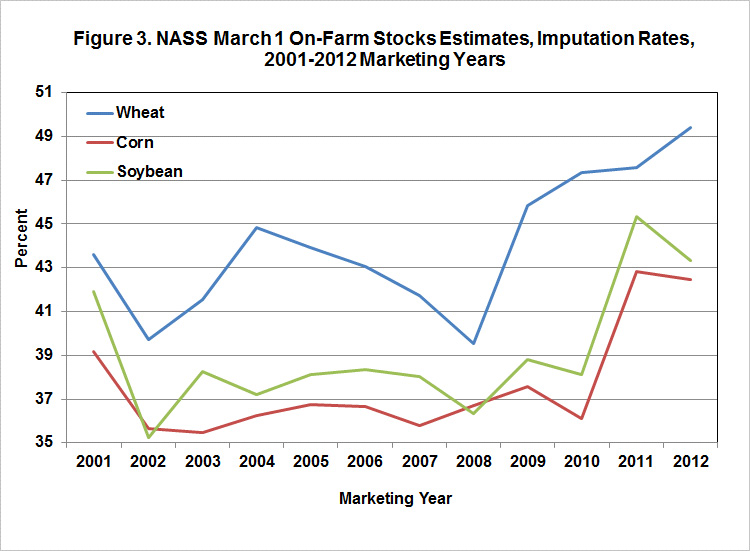 Errors Associated with Increase in Number of Ethanol Plants

A concern by some market participants with USDA survey methodology for quarterly stocks estimates is associated with the increased use of corn for ethanol production.  Concerns appear to stem from the timing of more frequent surprises in the stocks estimates and the growth of the ethanol industry rather than anything specific about the reporting of corn stocks by commercial facilities.  Errors in estimating off-farm stocks associated with ethanol would presumably have to be the result of double counting some inventories (by ethanol plants and another entity) or the exclusion of some facilities from the reporting of grain stocks.  Neither condition appears to hold.  Additionally, such errors would not account for the pattern of surprises in the stocks estimates.  Finally, ethanol plants tend to have limited storage capacity, generally only a few days or weeks of feedstock needs.  This limits the magnitude of potential double-counting or exclusion of inventory in the USDA surveys.

A concern related to the previous one is that quarterly grain stocks estimates capture grain in store, but do not attempt to estimate the amount of grain in transit.  For the most part, the amount of grain in transit should be fairly constant throughout the marketing year, with some seasonal decline as soybean crush and exports and domestic corn consumption declines during the last half of the marketing year.  Likewise, the amount of corn in transit at any given time is estimated to be in the range of 25-50 million bushels so that variation in the amount would not likely be large enough to explain the magnitude of recent surprises in corn inventories.

The ethanol conversion argument fails for a number of reasons.  First, and most importantly, there is no link between ethanol yield estimates and the magnitude of quarterly stocks.  The measurement of stocks is not dependent on how corn is consumed. Plus, the differences in ethanol yield estimates would make relatively small differences in the estimates of the amount of corn used. As an example, if it is assumed that ethanol production is about 3.3 billion gallons during a quarter, then an ethanol yield error of 0.01 (2.75 versus 2.74 gallons per bushel) roughly equates to a 4.4 million bushel difference in corn usage.   It would take very large swings in the actual yields to approach the magnitude of the stocks surprises in corn.  Even then, incorrect estimates of ethanol yield would not explain why surprises in stocks estimates occur in some years and not in others.

There has been no shortage of explanations offered to explain the decline in the ability of market participants to anticipate USDA stock estimates for corn in recent years.  We examined some commonly proposed explanations and found each of them to be lacking in terms of one or more of four key criteria.  So, does this mean the grain stocks surprises simply cannot be explained?  We don’t believe this is the case.  Instead, there is one explanation–unresolved sampling errors in production estimates–that has considerable merit.  More specifically, large market surprises may be related to large sampling errors for January production estimates.  The next two posts in this series will present the case for this explanation.