When MF Global collapsed in October 2011 – followed closely by Peregrine Financial Group in July 2012 – a search began for more effective ways to make futures customers whole in the event of a brokerage firm failure. This is the first in a series of posts that examines some of the proposed ways to restore customer funds when a brokerage firm goes under.

Brokerage, in simplest terms, is the process of executing customer orders to buy and sell. It also involves collecting and disbursing funds, maintaining customer trading records, and providing various other trading-related services. Notice in this description that the firm does not do any trading for its own account. As a result, a brokerage firm has little financial risk, provided it operates efficiently and minimizes errors. The historical record shows that most failures occur because 1) there is theft, embezzlement, or other diversion of customer funds, 2) customers fail to meet their financial obligations and drag down the entire firm, or 3) the firm moves into proprietary trading or other business areas that expose it to greater risk.

This also explains why, despite the fact that futures brokerage is highly competitive and profit margins are extremely thin, bankruptcies are relatively rare. Figure 1 shows the number of futures brokerage failures each year over the last 75 years. Over the entire period there were 83 failures, for an average of slightly more than one per year. However, nearly one-third of these failures occurred in just two years – 1939 (14 failures) and 1978 (11 failures), and in 42 of the 75 years (56%) there were no failures at all. Most of the 1939 failures involved various financial crimes, while the 1978 failures largely involved trading losses on London-traded options which eventually were banned. 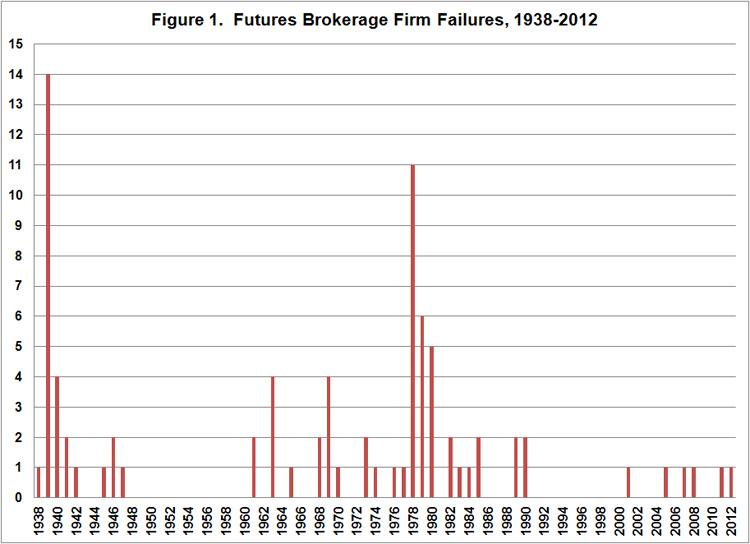 The customer segregation process is designed to keep customer positions and other assets separate from those of the brokerage firm. This separation minimizes disruptions to customers when a firm fails. Immediately following a failure, all customer accounts are transferred in their entirety to another firm, including all assets (including cash) specifically identified with a particular customer account. This “bulk transfer” process is quick and seamless, and is normally completed within a day or two. Then any remaining assets, including accounts owned and controlled by the firm, are liquidated and the proceeds divided among the remaining creditors.

This process breaks down when customer funds go missing, as happened with both MF Global and Peregrine Financial Group. One particular source of frustration to MF Global futures customers, who have been waiting more than two years to recover all their funds, is that the MF Global securities (stock and bond) customers received full payment within weeks of the firm’s collapse. Securities customers are covered by the Security Investors Protection Corporation (SIPC), which was created by Congress in 1970 to cover losses when a securities broker fails and customer cash and/or securities are missing. This has led to calls for a SIPC-like system for futures customers.

SIPC is funded by assessments on brokerage firms. The rate varies depending on the level of reserves in the fund, and is currently ¼ of 1 percent of a brokerage firm’s net operating revenues from securities. SIPC also has the ability to borrow up to $2.5 billion from the US Treasury via the Securities and Exchange Commission. At the end of 2012 the SIPC reserve fund held $1.6 billion, and over the years SIPC has paid out more than $2.1 billion to 770,000 securities investors. Shortfalls are covered up to $500,000 per customer, with a maximum of $250,000 for missing cash. However, SIPC does not pay customers anything in cases of fraud.

Discussions about the creation of a SIPC-style fund for futures customers date back to the creation of the Commodity Futures Trading Commission (CFTC) in 1974, when Congress recognized the potential need to maintain liquidity and public confidence in the futures markets. Rather than create a fund for the futures industry, Congress instructed the CFTC to study the issue and submit a report justifying the need for such a program. The CFTC’s cost-benefit analysis did not support the need for a reserve fund at that time, but the CFTC kept open the possibility for such system by continuing to monitor the issue.

In March 1985, the brokerage firm Volume Investors Corporation collapsed when three customers failed to meet a $26 million margin call. To meet this shortfall, Volume Investors liquidated accounts worth $3.6 million that belonged to approximately 100 other customers who were not involved in the missed margin call. Ultimately, the firm’s owners paid back the customer funds out of their own pockets.

The Volume Investors debacle was by far the largest loss ever suffered in a firm bankruptcy at that time, and prompted fresh calls for a futures customer protection program. The CFTC commissioned the National Futures Association (NFA), the futures industry’s self-regulatory group, to conduct a study which was completed in November 1986. The report noted that brokerage firm failures were relatively infrequent, and customers rarely lost any money because either the funds eventually were recovered or the losses were reimbursed by individuals in the firm or by one of the exchanges. Total customer losses in any calendar year had never exceeded $200,000 until 1978, when they jumped to nearly $2 million. Losses totaled $1 million in 1979 and surged to more than $6 million in 1980 before dropping to a range of zero to $300,000 in each of the next five years. Therefore, the 1978-1980 period was dismissed as an aberration, and the return to more normal loss levels was credited in part to regulations implemented by the CFTC including higher net capital requirements, proper segregation of customer funds, stricter auditing standards, and increased customer creditworthiness requirements.

The study estimated that a mechanism to cover customer losses of $100,000 per year (in 1986 dollars) would be adequate for most purposes. However, in cases of under-segregation where customer funds are missing, as much as $3.5 million per year might be needed to fully compensate customers in a worst-case scenario. Alternatively, if the need to reimburse customers is eliminated, up to $2.4 million could be needed to cover margin requirements and facilitate the transfer of positions from the failing firm. [Readers may recall that when the MF Global accounts were transferred, margin balances were deficient in many cases and customer trading was restricted.]

Next, the study examined a number of ways to fund the program. Commercial insurance was explored, but the amount of coverage available likely would be a small fraction of the amount required. In addition, insurance payments to customers would involve a deductible, so customers would not be able to recover 100% of their funds.

The study also considered an accumulated cash fund modeled after SIPC, in which payments would accumulate over a period of time and be used to cover losses when they occur, and various assessment methods were reviewed. However, serious concerns were expressed that contributions to the fund would be a financial burden on brokerage firms, it would take a substantial amount of time to accumulate the millions of dollars necessary for a credible fund, and once payments were made it would take additional time to restore the fund balance to the desired level. In addition, every dollar contributed to the fund would be a dollar unavailable for investment in internal systems to increase customer safety and financial soundness. Ultimately, customers would bear the cost of these contributions in the form of higher commissions or other fees.

Following the release of the NFA report in 1986, no further action was taken. The futures industry entered a period of explosive growth, brokerage firm failures became even more infrequent (see Figure 1), and interest in a SIPC-like reserve fund for the futures industry faded away, to be largely forgotten for the next 25 years.