In Tuesday’s post (see here) we made the argument that an insurance-style target index-deficiency payment program without premium oversight from USDA’s Risk Management Agency may result in farmers using the insurance program strategically to extract subsidies. Additionally, our research supports the view that the dairy market stabilization program may have unintended consequences with respect to the equity of the revenue penalty and free-rider incentives to expand milk production. In today’s post we will build on Tuesday’s post by providing additional evidence on functional equity to make the case why we believe that a combination of the countercyclical payment program and a slightly modified income-over-feed-cost (IOFC) margin program is a better path forward and common sense dairy safety net alternative (see here).

The big questions to be addressed in today’s farmdoc daily post include:

In addressing these questions we will make the claim that a variant of Pareto’s 80-20 rule also applies to the margin insurance program and that a majority of the benefits of will accrue to the largest, and wealthiest, dairy farm operators. The aforementioned questions on the role of society in providing a farm safety net should be carefully considered before advancing alternative safety net programs as proposed by either the U.S. House or Senate. Failure to consider potential implications of proposed reform may result in irreversible structural changes to the industry.

Who Benefits With An All-Inclusive Safety Net Program?

The current dairy farm safety net program, Milk Income Loss Contract (MILC), is available to any producer with an adjusted gross non-farm income under $500,000. Additionally, the limit for benefits each fiscal year is capped at 2.985 million pounds of milk shipped to market. Contrary to MILC, margin insurance does not include adjusted gross income limitations or have fixed caps on production eligibility. Instead all U.S. dairy farms would be eligible to insure up to 80%-90% of their annually updated milk production history. This “all-inclusive” mandate for insurance would provide considerably more financial assistance than the current dairy farm safety net program for the largest dairy farm operations.

For expositional purposes consider the following: under margin insurance a 3,000+ cow dairy producing 70 million pounds per year could insure approximately 63 million pounds. Assuming a $1.00 per cwt average net benefit for the year margin insurance would provide an annual payment of $630,000 to this dairy. Under MILC, and a similar $1.00 per cwt annual average payment, this same dairy would be limited to $29,850 in income support.

To provide additional evidence on the distribution of margin insurance benefits our recent economic and financial farm analysis (see here) found that expected outlays favor large farm operations and, depending on the risk environment and actual program enrollment, may be two to three times higher than those under the existing countercyclical payment program. Under MILC, we estimated that farms with less than 100 cows (approximately 70% of farms) account for about 39% of net expected benefits and farms over 1000 cows (3% of farms) account for 9% of net expected benefits. Under margin insurance, we projected that farms with fewer than 100 cows would get approximately 23% of net program benefits, and farms over 1000 cows would account for 36% of benefits during low margin outcomes (Figure 1). While the size of the farm safety net has grown in total dollars and smaller farms may stake claim to a larger portion of this income support relative to the existing programs, the majority of the total benefits will flow to the largest dairy farmers. Thus, under margin insurance the distribution of benefits will follow closely to the distribution of milk production and the largest dairy farm operators will receive the greatest income support. 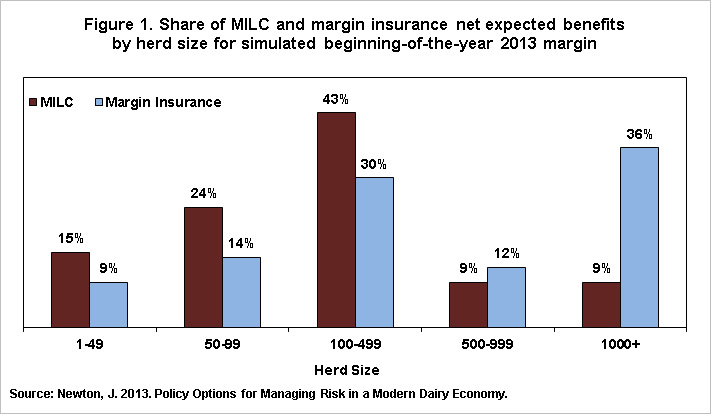 How Much Of A Safety Net Should Society Provide?

To address this question we require information on the level and distribution of net farm income by herd size. Using farm survey data on dairy farm financial structure provided by the USDA Economic Research Service we find that on dairy farms with 1000+ head of milking cows the top 25% had an average total household income of at least $1.8 million dollars in 2011, and averaged $1.3 million dollars over the 2008-2011 period (Figure 2). Farms this large typically support more than one operator. Using data from farm financial record programs we know that for these large farms this is typically about two operators. Adjusting for multiple operators the total household income data still indicates very high average total household income per operator of $650-$900 thousand dollars over 2008-2011. On dairy farms with 1000+ cows the median household net worth, a more encompassing measure of farm wealth, exceeds $5 million dollars when averaged over this period, and is $9.7 million for those larger scale farms in the top 25%.  Even for medium sized dairy farms, those in the 100-499 herd size, median net household net worth was over $2.4 million dollars. 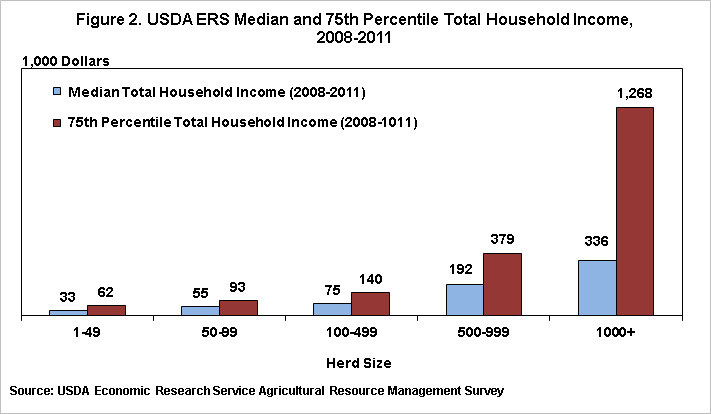 In a July farmdoc daily post (see here) Dr. Carl Zulauf examined the income of U.S. farm vs. nonfarm population for 2011. Zulauf found that for the largest U.S. farm operations with gross sales over $250,000 the total household income was 194% more than the U.S. household income for 2011. Farm households generate two sources of income: farm income and non-farm income. Zulauf found that this off-farm portion of income for these same farms was $50 thousand dollars, approximately 72% of U.S. average household income in 2011. While total household income is not a direct indicator of farm profitability, recognition that farm incomes exceed nonfarm incomes, and for the largest producers substantially so, the stage is set for a compelling discussion on the nature and extent of a farm safety net and a safety net for whom.

Is There A Better Way Forward?

In examining the current proposals what we find is that margin insurance can be an effective safety net program. However, we’ve also made the argument that design flaws such as the fixed premium structure, the lack of means testing or production eligibility constraints, and the absence of uniformity in dairy market stabilization across the U.S. will likely lead to the program exceeding budget expectations and accelerating industry consolidation.

So while margin insurance may work in providing needed financial relief to U.S. dairy farmers, it may have unintended and unwanted consequences. Perhaps a better way forward is not a giant step, but a small step in the desired direction. We propose keeping the existing MILC safety net program and offering as additional support a limited protection margin insurance program (see here). This option, which we call MILC-Insurance, would offer farmers an annual choice between an enhanced MILC program and a limited IOFC margin insurance program.

By capping insurance coverage at $6.00 or $6.50 per cwt, and reducing the subsidy on premiums, adverse gaming incentives are substantially reduced. Additionally the amount and frequency of income support is limited to times of low IOFC margins at or below 78% of the historical average. Our independent analysis demonstrated that by limiting both the amount of income support and adverse gaming incentives MILC-Insurance could cost significantly less than the currently debated programs while offering the best of both countercyclical revenue support and catastrophic margin insurance.

Using data provided by USDA we’ve broken down the U.S. dairy farm population into various size categories (Table 1). 85% of the dairy farms in our sample milk less than 200 cows and supply less than 30% of the milk, while more than 43% of the milk is produced by the largest 3% of dairy operations. These differences in farm sizes and productivity demonstrate that a one size fits all safety net does not match the diversity of U.S. dairy farm operations. MILC-Insurance offers more choices to accommodate the assortment of U.S. dairy farm operations. Small scale dairy farmers or farmers who grow their own feed and find MILC to be a useful safety net would be able to keep this program. Larger dairies, who produce in excess of 50% of the milk, and those who find MILC to be insufficient, may find the insurance option, with more actuarially fair premiums, a better fit for their operation.