The survey results for estimating on-farm stocks of corn (and all other commodities) are subject to sampling error because only a sample of farm operators are surveyed.  While the sample is of sufficient size and is drawn randomly in such a way as to be representative of all farm operations, it is not a census of all farm operations.  As a result, a different sample could produce different results and any sample might not accurately reflect the entire set of farm operators.  In contrast, the survey of off-farm stocks is a near census.  All known commercial operations that may have crops in storage are surveyed.  The survey includes about 4,800 entities that represent nearly 8,800 storage facilities.  In the most recent survey cycle, the response rate to the survey was about 82 percent of the entities.  However, the response rate for larger entities was even higher so that more than 82 percent of the storage capacity was represented by the respondents to the off-farm survey.

The USDA acknowledges and quantifies the potential sampling error for the on-farm stocks estimates in each of the quarterly stocks reports.  The following statement, for example, was included in the January 2014 report that contained the estimates of stocks as of December 1, 2013:

Both the on-farm and off-farm stocks estimates may also contain non-sampling errors, which cannot be directly measured and are not considered in our analysis.  The Grain Stocks reports contain a statement relative to these potential errors.  The January 2014 report, for example contained the following statement:

“Survey indications are also subject to non-sampling errors such as omission, duplication, imputation for missing data, and mistakes in reporting, recording, and processing the data. Off-farm, as well as on-farm stocks, are subject to these types of errors. These errors cannot be measured directly,   but they are minimized through rigid quality controls in the data collection process and a careful review of all reported data for consistency and reasonableness.”

With this background, we can turn our attention to the sampling error in the USDA quarterly corn stocks estimates.  When the USDA releases a point estimate of quarterly corn stocks, it needs to be recognized that the true magnitude of on-farm stocks may differ from the point estimate.  With 95 percent confidence, for example, on-farm stocks on December 1, 2013, which were estimated at 6.38 billion bushels, may have been as much as 217 million bushels larger or smaller than the point estimate (plus or minus 3.4 percent).  The size of this 95 percent confidence interval has varied over time and varies from report to report.  The interval tends to be the smallest, in percentage terms, for the December 1 estimate and largest for the September 1 estimate.  Since December 1 stocks are much larger than September 1 stocks, the confidence interval measured in bushels is largest for the December 1 estimate, declines through the marketing year, and is smallest for the September 1 estimate.  Note that sampling error only applies to the on-farm stocks estimates since the off-farm stocks estimates are not based on a randomized survey design.

As a result of the presence of sampling error, some of the market surprise provided by USDA stocks estimates may come from the fact that actual on-farm stocks differ from the point estimate released by the USDA.  Market participants, then, may have correctly anticipated stock levels, but those stocks were not confirmed due to sampling error, resulting in a surprise to the market.  To judge whether sampling error could explain the magnitude of market surprises in recent years, we calculated the magnitude of the 95 percent confidence interval for each quarterly estimate of on-farm stocks from December 2009 through December 2013 and compared that to the magnitude of the market surprise in each of those reports.  The confidence interval is that reported by the USDA in each of the Grain Stocks reports.  The period starting in 2009 was selected due to the prevalence of large surprises beginning that year. The magnitude of the surprise is measured as the difference between the USDA estimates of stocks and the average expectation for the estimates as revealed by a survey of market participants and reported by Dow Jones Newswire.  For the December 1 report, the magnitude of the surprise in the stocks estimate is adjusted for any unexpected change in the corn production estimate in the January Annual Crop Production report.  That unexpected change is calculated as the USDA production estimate minus the average trade guess for the size of the estimate. 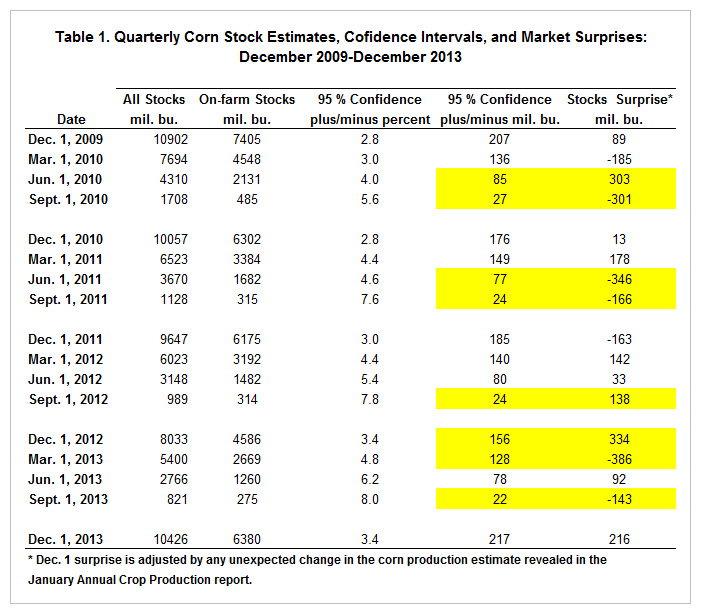 It might be argued that the large surprise in the stocks estimate for those eight quarters might be explained by sampling errors of opposite directions in two consecutive quarters.  The sum of the sampling errors in those two estimates, then, might explain the surprise for the most recent quarter.  However, all of the eight large surprises exceed the magnitude of the 95 percent confidence interval for the current and previous on-farm stocks estimate.