The USDA is always careful to include a detailed discussion of potential sampling errors in production reports.  For example, the Crop Production: 2012 Summary released in January 2013 included this discussion of the reliability of production estimates:

“The surveys used to make the acreage, yield, and production estimates contained in this report are subject to sampling and non-sampling type errors that are common to all surveys.  Reliability of the objective yield and farmer survey must be treated separately because the survey designs for the two surveys are different.  The objective yield indications (corn, cotton, and soybeans) are subject to sampling variability because all acres of a given commodity are not included in the sample.”

“The farm operator survey indications are also subject to sampling variability because not all operations with commodities of interest are included in the sample.  This variability, as measured by the relative standard error at the National level, is approximately 1.1 for corn, 2.3 for Upland cotton and 1.1 for soybeans.  This means that chances are approximately 95 out of 100 that survey estimates for production will be within plus or minus 2.2 percent for corn, 4.6 percent for Upland cotton, and 2.2 percent for soybeans.”

“Survey indications are also subject to non-sampling errors such as omission, duplication, imputation for missing data, and mistakes in reporting, recording, and processing the data.  These errors cannot be measured directly, but they are minimized through rigid quality controls in the data collection process and a careful review of all reported data for consistency and reasonableness.” (p.94)

This discussion should make it clear that the sampling error for any particular January corn production estimate could easily be several hundred million bushels, and therefore, unresolved errors in production estimates for corn could logically account for the magnitude of surprises in the quarterly stocks estimates observed over the 2006-07 through 2012-13 marketing years.  Under such circumstances, surveys for the USDA stocks estimates would presumably reveal actual crop size, while analyst expectations would be based on inaccurate production estimates or forecasts.  While unresolved corn production errors can in general explain the stocks and usage surprises, a credible explanation needs to satisfy four criteria related to the specific pattern of surprises since 2006-07.  We consider each of these criteria below.

1)Why corn and not soybeans?

This criteria is the most straightforward to meet because of differences in usage accounting across corn and soybeans.  Since all but a small fraction of soybean use is measured, the more definitive accounting of soybean usage allows for a relatively precise final estimate of soybean production once the stock estimate for the end of the marketing year becomes available, while the lack of definitive accounting of feed and residual use for corn does not provide for such a precise estimate.  So, it is quite reasonable to expect stocks/usage surprises to be larger in corn than soybeans. 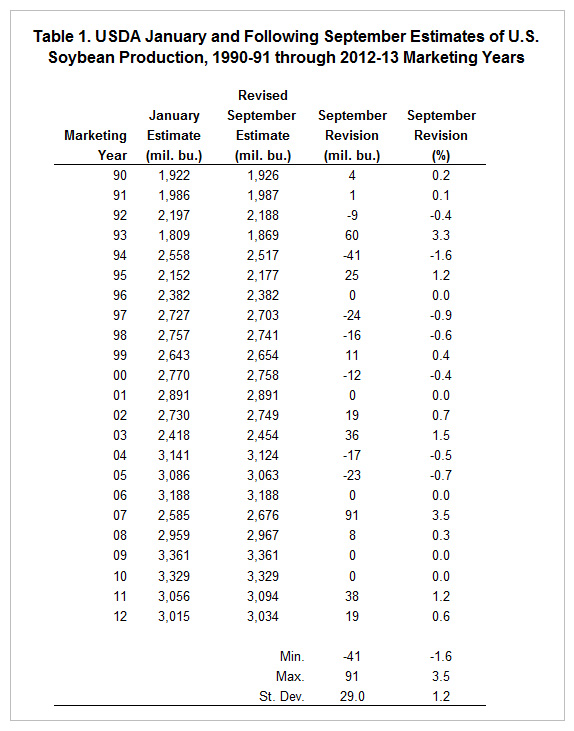 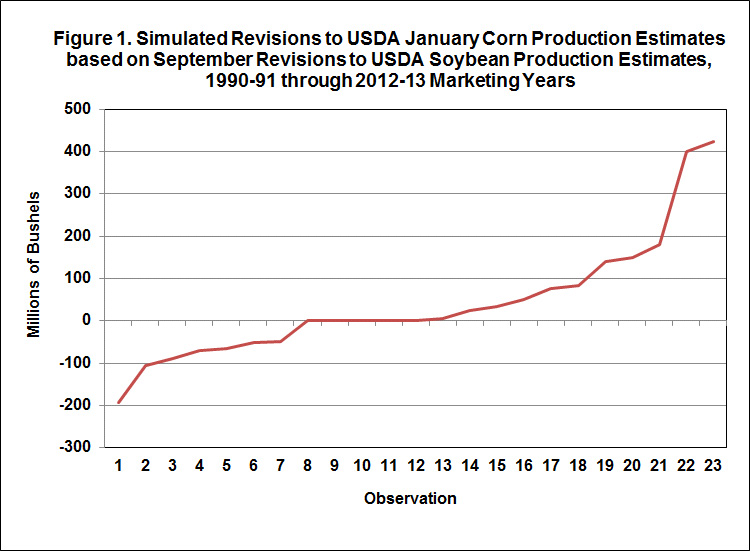 There was a notable increase in the volatility of market surprises in corn stocks estimates/implied usage starting with the 2006-07 marketing year and a credible explanation of the surprises needs to account for this fact. One possibility is that unresolved corn production estimation errors increased over 2006-07 through 2012-13 due to a series of unusual growing season weather conditions that either increased the sampling variability of production estimation or simply caused large sampling errors for particular years.  Summer weather conditions in the U.S. Corn Belt for all but a few years over 1990-2005 were rather “benign” and there were relatively few large deviations from trend yields.  It is also undoubtedly true that growing season weather during 2006-2012 tended to be more extreme.  For example, 2009 saw record corn yields but an exceptionally late harvest due to excessive rainfall during the normal harvest period.  As another example, the 2012 drought was among the most severe of the last century and drove corn yields far below trend.  It does not seem unreasonable to conclude that sampling errors for corn production estimates would be larger under these circumstances.  But, the fact remains that there is uncertainty why sampling errors increased over the 2006-07 through 2012-13 marketing years if these errors are in fact the correct explanation for the large surprises in corn stocks/implied usage.

3)Why only in particular marketing years? 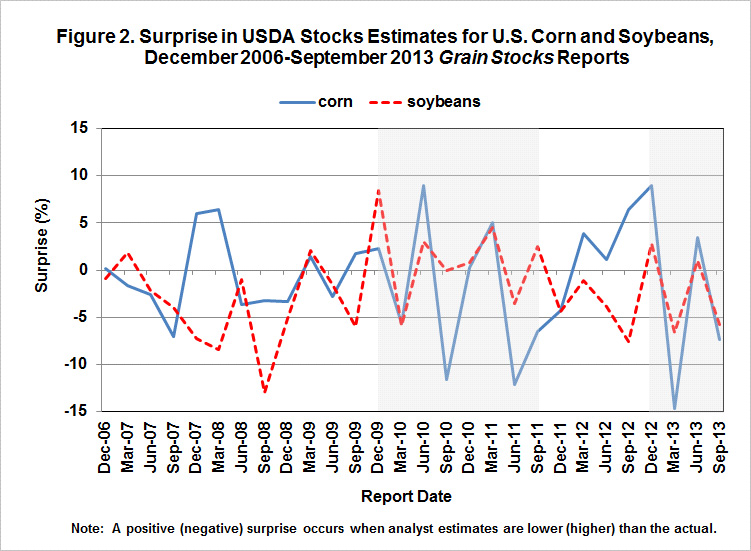 4) Why a pattern of reversals during marketing years?

There was a distinct tendency towards reversals in the surprises in corn stocks estimates/implied usage within the 2009-10, 2010-11, and 2012-13 marketing years.  This is undoubtedly a difficult criterion to meet given the specificity of the pattern.  However, the reversal pattern of implied usage surprises could be generated by market analysts mistakenly viewing a stock surprise as a usage surprise when in fact the stocks surprise is the result of unresolved sampling errors in production estimates. This leads to a reversal in the sign of the subsequent surprise as the true rate of usage is revealed. (A detailed discussion of  how this could occur is be found on pp.49-50 of the full report)  While this is a logical possibility, one also has to acknowledge that the varying magnitude of surprises in implied usage through the marketing year could be associated with other factors, particularly sampling errors in the stocks estimates themselves.