Continuing the discussion and evaluation of the provisions of the new farm bill (the series is available here), today’s post turns to the topic of base acreage.  The PLC and County ARC commodity programs are all tied to historical base acreage rather than current production. The Individual ARC program is tied to both current planted and historical base acreage (see this post for more discussion on the PLC and ARC programs). The 2014 Farm Bill provides the owners of a farm with a one-time opportunity to reallocate their base acres on each Farm Service Agency (FSA) farm.  There is no requirement that the farm owner reallocate base acres; the decision to update is voluntary and the owner of the farm may decide to simply retain the current configuration of base acres on the farm.  Failure to make an election operates as a decision to retain the current base acre allocation for the farm.

If reallocation is elected, the reallocation is determined using the ratio of the simple average acres planted on the farm to each covered commodity during the 2009 and 2012 crop years.  Since the ratio of plantings is used, the total base acres on the farm cannot increase or decrease through reallocation; electing to update base acres only changes how the base is divided up among the program crops on the farm.  This acreage will include program crops that were harvested (including for silage) as well as crops that were used for haying and grazing or other similar purposes.  The planted acreage calculation will also include any acreage on the farm that the producer was prevented from planting during those crop years because of a natural disaster.  Reallocation will be in proportion to the ratio of the four-year average of planted acres of the commodity to the four-year average of acreage planted to all program crops on the farm. If the farm owner elects to reallocate, the decision applies to all covered commodities on the farm and all four years must be included, even if a program crop was not planted.

For acres that were prevented from being planted, but subsequently planted to another program crop, the farm owner will be permitted to elect the commodity that will be used for the crop year in the four-year average calculation. For example, if the farm had prevented planting corn acres but then planted soybeans in a given crop year during the 2009 to 2012 period, the farmer could choose whether to use corn or soybeans for that year in the reallocation calculations.  The farm owner, however, may not include both the initial commodity and the subsequent commodity, unless the farm has an established practice of double cropping.

Table 1 provides some example base acreage reallocation calculations for three example farm scenarios (Example Farm 1, 2 and 3).  All example farms currently have 100 total base acres with 50 corn base acres and 50 soybean base acres. 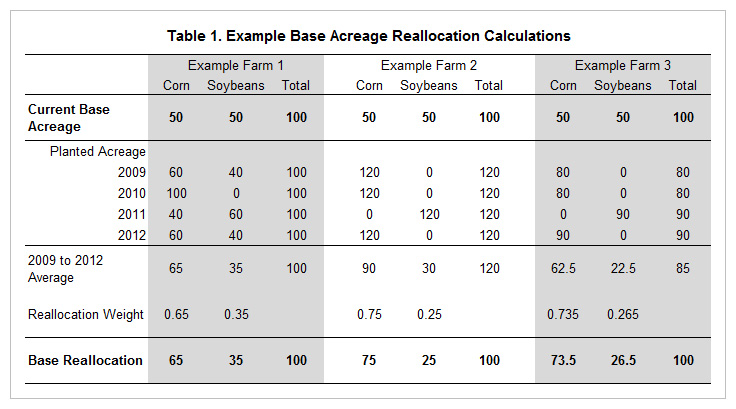 Additionally, the base acres on a farm can be adjusted whenever a Conservation Reserve Program (CRP) contract with respect to the farm expires or is voluntarily terminated or if cropland is released from a CRP contract.  When acreage comes out of the CRP and the base acres adjustment is first made, the owner of the farm will be provided a single opportunity to make the election to receive Price Loss Coverage (PLC), Agriculture Risk Coverage at the county level (Count ARC) or Agriculture Risk Coverage at the individual farm level (Individual ARC) for those acres leaving the CRP and added to the farm.  The farm can choose to receive payments under those programs or a pro-rated CRP contract payment but cannot receive both.

As noted above, the farm may not increase or decrease the total base acres through the decision to reallocate.  If the sum of the base acres for the farm (including any new oilseed acreage and generic base acres) plus any acreage on the farm enrolled in CRP or the Wetlands Reserve Program (WRP or successor programs) or other Federal conservation program that makes payments in exchange for not producing an agricultural commodity exceeds the actual cropland acreage on the farm, the Secretary is required to reduce the base acres.  The owner of the farm will be allowed to select the program crop base acres upon which the reduction will be made.

An owner may elect to reduce the farm’s base acres at any time and the reduction will be permanent for the farm.  Additionally, the Secretary is required to reduce a farm’s base acres proportionately any time that the land on the farm has been subdivided and developed for multiple residential units or other non-farming uses, so long as the size of the tracts and the density of the subdivision indicates that the land is unlikely to return to farming.

The 2014 Farm Bill provides farmers a one-time option to reallocate base acreage on their farm based on planted acreage from 2009 to 2012. This post provided three relatively simple base acreage reallocation calculation examples.  For many farms, these calculations may be more complicated and final regulations from the FSA will determine how those situations are handled. Beyond the base reallocation decision and calculations, a number of other adjustments could be made to a farm owner’s base acreage.  These include adjustments due to acreage exiting conservation programs and base reductions.

Reallocation decisions will be influenced by a number of factors.  These include the farm owners’ and operators’ commodity program choices and intentions for future crop plantings.  Future posts will analyze these decision factors and examine some of the regional implications for base reallocation.