While the lowering of biofuel mandates from legislated levels in the EPA’s proposed rule for the RFS in 2014 was seen as a blow to domestic ethanol and corn producers, strong ethanol exports have proven to be a bright spot for the industry. Strong margins have kept significant capacity in ethanol production, contributing to stable corn grind demand as covered by Darrel Good in a post last week. Current expectations for the 2013/14 crop year are for around 5 billion bushels of corn-for-ethanol demand. Depending on domestic ethanol use and the final RFS rule ethanol exports, continued strength in foreign demand could lead to ethanol exports in the range of 600 million to 1 billion gallons.

An important point to note is that ethanol or other biofuels produced in the US and exported for consumption overseas do not count toward the blenders’ RFS obligations. The Renewable Identification Numbers (RINs) associated with exported biofuels are retired and no longer eligible for use towards RFS compliance. Thus, exports are not substituted for domestic consumption but rather represent additional demand.  Ultimately, exports provide a path around, rather than through, the ethanol blend wall by allowing the domestic industry to produce greater volumes of ethanol than the blend wall limitation implies for domestic use.

Figure 1 shows monthly ethanol exports based on data provided by the Energy Information Administration. Monthly export levels have typically been in the range of 40 to 60 million gallons. Future export growth remains uncertain and will depend, as do many commodity markets, on price and policy. 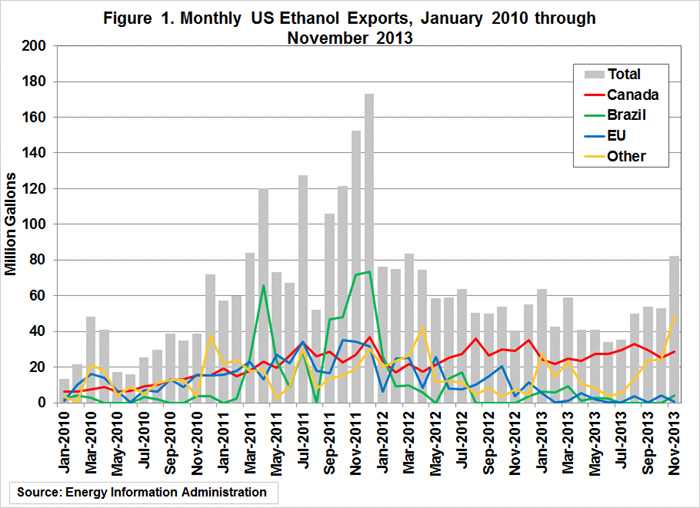 The surge in exports experienced in various months during 2011 can be a bit deceptive when considering market potential. During this period, the US was both importing and exporting ethanol from Brazil. In the US, the RFS program distinguishes between sugarcane ethanol (qualifies as an advanced biofuel) and corn-based ethanol (qualifies as renewable biofuel). Brazil has its own minimum blending requirement, but does not distinguish between the ethanol they produce domestically from sugar cane and the corn-based ethanol which dominates the industry in the US. In 2011 the availability of sugar cane ethanol in Brazil was less than the needs implied by their blending requirements and US import demand. Therefore, ethanol imported from Brazil to help satisfy the advanced component of the RFS in the US was, in part, back filled with shipments of corn ethanol from the US to help satisfy Brazilian blending requirements. Brazil will continue to be an occasional export destination, when supplies are tight in the Brazilian market or when internal infrastructure bottlenecks hamper distribution, but is unlikely to provide a stable source of demand for US ethanol. Changes to the RFS proposal for 2014 make the level of cross trade seen in previous years unlikely as the requirement for advanced biofuels beyond biodiesel and cellulosic biofuels, the main driver for sugarcane ethanol imports, is minimal. Even with the limited window for Brazilian imports to meet the advanced portion of the RFS, there may still be modest import growth from Brazil to meet California’s state-level low carbon fuel standard (LCFS). Imports from Brazil could potentially displace domestic corn ethanol consumption if blend wall limits are binding.

In contrast, Canada has been a stable destination for US exports despite increases in their own domestic production. Canada’s biofuel policy includes a 5% ethanol blend requirement to help ensure steady blender demand. However, growth may be limited by the same blend wall the US faces as blenders are already thought to be over-complying (blending at greater than the national 5% blend requirement). The small size of the Canadian market, with net sales of 11.1 billion gallons of gasoline and 4.6 billion gallons of diesel, less than 1/10th the size of the US market, may offer limited expansion potential in the near term.

The European Union market holds significant potential for US ethanol exports both because underlying policies support use through a 10% emission reduction target for the transport sector and a study commissioned by the EU to examine indirect land use change (ILUC) which gives corn ethanol from the US a fairly favorable role to play in meeting their own renewable targets. While the EU vehicle fleet is dominated by diesel vehicles (the opposite of the US), the gasoline market provides significant opportunities for US ethanol exports. The US has exported significant volumes of ethanol to the EU, but the closure of a tariff window for ethanol in 2012 and the imposition of anti-dumping duties on US ethanol in the spring of 2013 has all but closed that market for US producers. Tariffs, duties, and greenhouse gas reduction scores assigned to US corn ethanol under the EU blending policy remain the main barriers and sources of uncertainty for future ethanol exports to the EU.

While policy drives potential trade with the EU, Brazil, and Canada, Mexico represents an opportunity for growth in US ethanol exports purely based on the economics of fuel blending. While we exported over 30 million gallons of ethanol to Mexico in 2013, we exported 10 times that volume of MTBE to Mexico. The banning of MTBE in the US as a ground water pollutant is one of the factors that helped to expand US ethanol consumption, but the product remains legal in Mexico and continues to dominate the oxygenate market.  The US could see additional growth in ethanol exports to Mexico, but it will have to be priced competitively with MTBE for its oxygenate properties.

In addition to consistent buyers such as Canada, Peru and Mexico, the recent run up in exports has gone to a wide variety of countries some of which are relatively new customers for US producers or who have been out of the US market for many  months. Figure 2 illustrates the various export markets for US ethanol and their relative size in November of 2013. Countries like Columbia, the United Arab Emirates, Jamaica and South Korea have made periodic purchases, with China making a sizeable purchase of 3.5 million gallons in November 2013. India has also been an on-again, off-again, purchaser of US ethanol, picking up 13 million gallons in the last two months of 2013 after having been largely out of the US market since 2011. When priced competitively against both petroleum products and other biofuel competitors, the US appears to be making export sales. However, the inconsistent nature of purchases and internal biofuel policies which sometimes favor domestic production in potential markets suggest continued export growth will require ethanol to remain both competitively priced and in a favorable policy environment. 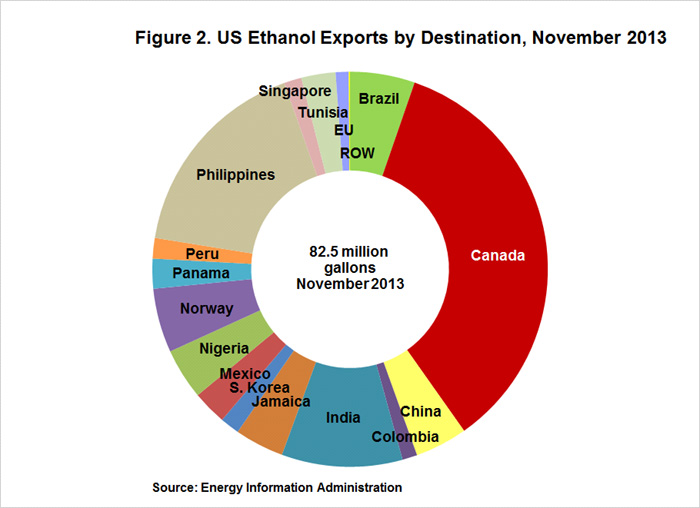 While the export growth has been a positive, compared with a relatively flat domestic market, further expansion will depend on the relative prices of corn and oil as well as market access.  As highlighted in Darrel Good’s post here, corn ethanol capacity is approximately 15.2 billion gallons annually, with the domestic market likely limited by the RFS constraints in the short run. Thus, depending on the final RFS rules for 2014, there exists sufficient capacity, perhaps up to another 1.0 to 1.5 billion gallons, for a further expansion of exports from current expectations.  Ethanol producers will have to see consistent export volumes and sufficient margins to consider expanding capacity to serve export markets. Fuel blending economics and energy policies remain the keys to the future.